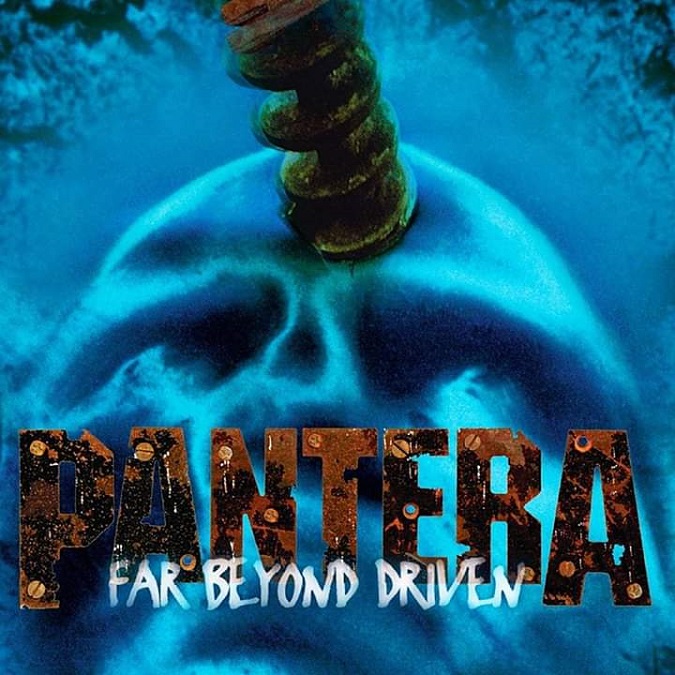 As is so often the case in life, you don’t choose metal music, metal chooses you. For many of us, it’s wired in our DNA, lying dormant in us since birth, just waiting for the switch to be flipped.

Vinnie Paul and Dimebag Darrell had it and became obsessed with the music from a young age, the brothers forming an unbreakable alliance that couldn’t be swayed by money or fame. PANTERA took a while in finding their signature sound, but once they did they became an undeniable force in the metal scene. Riding a wave of rabid interest forged by intense touring cycles, the band entered the studio to record their third major-label album, ‘Far Beyond Driven‘.

The prevailing winds were blowing in the direction of Seattle, grunge music eradicating hair metal and making many once-popular metal bands passé overnight. But PANTERA had no intention of stepping aside, the band already practically metal royalty, the deadly one-two combination of ‘Cowboys From Hell‘ and ‘Vulgar Display of Power‘ transforming them from local Texas draw to headliners in record time. Their fan base was hungry for new material and was praying PANTERA would deliver more of the nasty groove metal that launched them to the top of the metal heap.

There was always the possibility of disappointment. Many of the thrash heavyweights who inhabited the same waters were already tempering their attack, slowing down, and “maturing.” Fortunately for us, PANTERA was still full of youthful energy, fresh ideas, and unbridled volatility. The fact that ‘Far Beyond Driven‘ is still the most extreme metal album to début at #1 on the Billboards charts even 25 years after its release speaks to both sweeping industry changes in regard to music consumption and the impact this album made when it hit.

Pantera was arriving at a crossroads – would they smooth over their rough edges, play nice, and create music that was more palatable to the masses, or would they double down on the aggression and harsh tones that had become their calling card?

Opener “Strength Beyond Strength” answers all the cynics with an uppercut of such vicious intent that we felt silly for ever harboring any doubts about the band’s commitment to metal. Pummeling and relentless, it was PANTERA‘s preëmptive strike against any potential backlash, the band crushing any dissension under their boots with an overwhelming show of force.

“Becoming” offers no respite, the abrasive main riff dancing around Vinnie Paul‘s kick drum patterns. Phil Anselmo gives us another lethal dose of his unique approach to motivational speaking: “A long time ago /I never knew myself /Then the memory of shame /Birthed its gift”. Phil has been accused of many things over the years, but his lyrics are often painfully honest, introspective, and a cut above many lyricists’ attempts at profundity.

Of course, the next song, “Five Minutes Alone”, plays into Phil’s caricature as a knuckle-dragging Neanderthal, but fuck it. Sometimes a testosterone dump can be satisfying, even cleansing, a colonic for the ego. Besides, the music is brutally accessible, the riffs of Dimebag grinding away, his synapse-frying lead tone as potent as ever.

“I’m Broken” is another mid-tempo assault, the groove appropriately nasty and unrelenting. The stream-of-near-unconsciousness pseudo-lyrics of “Good Friends and a Bottle of Pills” are one of the larger missteps on the album, in my opinion, and even Rex Brown‘s filthy bass work was unable to save it. Possibly the worst song in PANTERA‘s history and, joke or not, it should have been left on the cutting room floor.

The fuzzy guitar arpeggios in “Hard Lines, Sunken Cheeks” fall prey to another devastating guitar riff, which in turn is swallowed up by the jackhammer assault that houses the verse sections of the song. The longest track on the album, it indulges in the sludgy, reptilian inclinations that Phil would later align himself with fully when Down released their ‘NOLA‘ album in 1995, with Anselmo on the mic. The almost suffocating groove of “Slaughtered” shows the airtight interplay of the musicians in Pantera, the song alternating between chugging riffs and teeter-tottering grooves.

The second half of the album shows PANTERA introducing subtle tweaks to their formula, “25 Years” once again prefiguring Down’s southern swamp metal. “Shedding Skin” and “Use My Third Arm” (ouch) are garish sideshows full of freakish riffs and brutal vocal conniption by Anselmo. Vinnie gets to show off his slick footwork during the intro of “Throes of Rejection”, the band jumping into a tightly syncopated groove that would only cause embarrassment for many bands who would dare to attempt it.

The album ends with the gentle cosmic sprawl of “Planet Caravan”, a song originally written and recorded by Black Sabbath. The tune comes out of left field, but is handled with reverence and ends up being the perfect close to a vicious disc of razor blade riffing and unrestrained hostility. PANTERA didn’t reinvent the wheel (or the steel) on this record, but it was just the type of album they needed to deliver in 1994.

Mainstream metal had taken a pounding over those last few years and we needed a new champion to steady the ship. PANTERA was proud to fly the metal flag when far too many bands shied away from the label. They may not have been the saviors of the genre like some have claimed, but they were certainly worthy ambassadors who refused to abandon their constituents when things were looking bleak. For that alone, they deserve all the accolades that have been lobbed their way over the years. RE-SPECT!