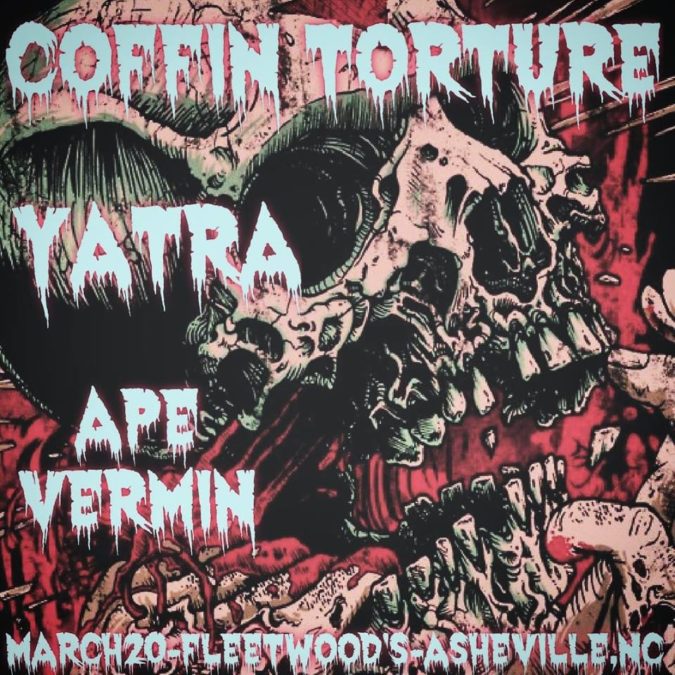 March saw the first extensive touring from Maryland progressive sludge / doom trio YATRA, a mid-west U.S. run that took them to Austin, TX. during SXSW for SX Stoner Jam ’19, then gradually worked their way back home.

The trek was a support crusade for the band’s phenomenal, first full-length album, the early 2019 Grimoire Records release, ‘Death Ritual‘. The album and YATRA have blown up the heavy music underground since its release, and it does not appear that shall cease any time soon. As an avid champion of all things YATRA, I was favored by the dark deities of doomery to catch them on the flip side as they were returning home at a mid-week gig in Asheville, North Carolina.

The date of the show, March 20th, happened to be guitarist / vocalist Dana Helmuth‘s birthday, but truthfully it would be people attending the show receiving the true gift this night. We would see YATRA joined by not one, but two of the most savage, abrasive bands The Carolinas has to offer, as N.C.’s own APE VERMIN and South Carolina’s COFFIN TORTURE had also come to the party.

Yes indeed, on this particular evening, this curiously cool, populated spot in the Great Smoky Mountains would be transformed to BASHville, with Fleetwood’s serving as ground zero for this threefold live detonation of ballistic bands.

This, in fact, would be my very first adventurous introduction to Fleetwood’s, a former automobile repair garage now converted to a showplace that, like most in the area, has a bit of an unusual decor. Intriguing curios all over the place, a faux (at least I assume) coffin against one wall, cool bar set-up, and, believe it or not, an in-house wedding chapel. Working as my mind has a tendency to do sometimes, it was not lost on me that the means to marry as well as bury someone, were right there within eyeshot of one another… making a profound subliminal statement.

First up to bat, or batter, in this case, would be the crushingly incapacitating trio that takes their name from a most vile primate, APE VERMIN! Let me tell you, all the pre-show hype and talking up I received about this band before now did not prepare me for this experience in any way whatsoever. Sure, I’ve heard ‘Sonic Monolith‘, their critically lauded 2018 release, an untold amount of times and know what severity they are capable of on an album… but that ain’t shit compared to staring this band down in the live setting – and here I was doing exactly that for my first time.

Guitarist/vocalist Brett Lee, bassist Jeb Laird, and in-a-pinch drummer David Bowman unleashed a hellish avalanche of sludge, the type embedded with outright unholy riffs. These axe-generated discharges alone were the stuff of Tony Iommi’s nightmares, but then the bass-made ferociously fuzz-rich, rhythmic rumbles and intensely explosive drumming sealed the deal. All combined and then topped off with Lee’s caveman-like gutturalized grunting vocals, it was a recipe that could’ve resulted in APE VERMIN being culpable for assault & battery charges.

They would play four songs in total, “Astral Drones“, “Abominable Hashmen“, “Witch-Jive“, and “Oath“. All of which were powerful, yet “Oath” was unquestionably my favorite from the four. After a short intro of ear-bleeding feedback, the song’s rising, descending, (repeat, repeat) delivery takes on a lumbering pace as it utterly pulverizes anyone listening. Also, I swear the song “Witch-Jive” seems to have a section that is a straight to hell bastardization of Ozzy’s “Crazy Train” for a moment or so, along with some fret smoking soloing thrown in for good measure. Impressive!

Next on the roster came YATRA, with Dana (Helmuth), bassist Maria Geisbert, and recent drummer addition, Sean Lafferty, having clearly donned their game faces and good to go. “Go” is what YATRA do quite well, too, wading into the headier side of a sludgy soup with a remarkable song like “Hour Of The Dragon“. Then, before you fully realize it, they’ve gone traipsing into areas of fuzz abundant groove metal, Maria’s 4-string war hammer implementing much of that, while Dana’s gravelly vocals stick for the ride.

It has been roughly six months since I saw YATRA for my first time at the Descendants Of Crom 2018 festival, and it would seem that the band has gelled some in that period, as they seem tighter this night. That might be partly due to the recent change behind the drum kit, or perhaps a galvanization has taken place stemming from their recent string of performances on this tour, who really knows? I do know that YATRA is incredible on album, on stage, and in person, the latter learned in part from the time I spent with them on this night, prior to their playing.

YATRA would proceed to render other tracks from the astounding ‘Death Ritual‘ album, including “Four Directions” and the smoldering, doom ‘n roll of the monstrously molasses-y oozer, “Smoke Is Rising” (still my favorite). Dana’s delivery of periodic guitar solos throughout their set had a rather mesmerizing effect, embedding themselves within the indolent roar of the YATRA live transmission.

The third act to play tonight would be the duo of guitarist / vocalist Thorfinn and drummer Blind Samson, better known as COFFIN TORTURE. Like Ape Vermin, I was well acquainted with these guys’ current album, ‘Dismal Planet‘, but that association had in no way prepared me for the live side of this act. I stood transfixed, bewildered by the deluging mass of death metal-ish sludge and abrading doom being heaped upon us by a two-man collaboration. It somewhat boggles the mind to ponder how this is possible. I don’t really fathom it, beyond knowing that it does take some equipment and for excessive sonic assailing, COFFIN TORTURE are a most caustic maestro in a symphony of destruction.

The subjugation of our sense of hearing at the hands and instruments of these two was a glorious pummeling to be sure. COFFIN TORTURE would ultimately treat us to four songs: “Budo“, “Izhar“, “Crawling Spleen“, and “Confessor“, conveying them upon an electrified emission replete with a persistent pounding. With their mass of downtuned, fuzz-encased riffs fueled by the vigorous wallop of the drums, COFFIN TORTURE ensured that we onlookers were decimated beyond recovery by the time they finished.

It nearly goes without saying that our (myself and photographer / friend Will Bouton*) three-hour drive home was a miserable one, ears ringing, body sufficiently audio-ravaged and such. It is the means by which we achieved this temporary misery that was so intense in the moment, immense in its scope, and now remains a cherished memory.

If you are presented an opportunity to see either YATRA, COFFIN TORTURE, or APE VERMIN, you most definitely should. Yet, be forewarned that each is an astringent agent of dense aural heaviness, not to be taken lightly… nor will they allow you to. In closing, make sure to check out the Riff Relevant Interview with YATRA conducted the same night of this show HERE.

* All photos courtesy of Will Bouton / FUGO Films & Photography