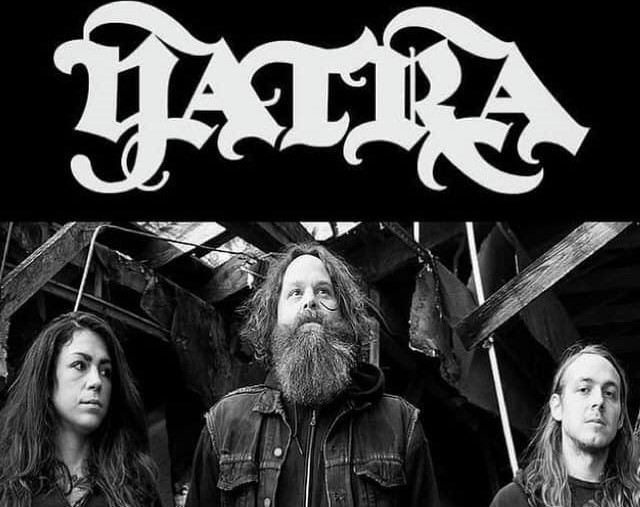 It has been at least six months since I composed my first article with any connection to Maryland doom and sludge metal trio YATRA, a piece on a few bands I was excited to see live at 2018’s Descendants Of Crom festival.

Since that initial coverage, YATRA has been a very busy band, from the release of their first full-length album, ‘Death Ritual‘, via Grimoire Records, to several live appearances. There was also a drummer change around the time of the album’s release, one that saw Sean Lafferty come in and take the kit alongside YATRA power couple, bassist Maria Geisbert and guitarist and vocalist Dana Helmuth.

From there, YATRA recently undertook an inaugural road trip, their first extensive tour run in the U.S., conducted throughout the month of March. Soon, the band will continue these live assaults with appearances at Grim Reefer Fest, New England Stoner & Doom Fest 2 (co-sponsored in part by Riff Relevant), Electric Funeral Fest IV, and Monolith On The Mesa events in the months ahead. These outings will provide further opportunities for more people to either discover YATRA for the first time or if already a fan but haven’t seen them live, a setting to do exactly that!

As a fan that had seen them once, I was recently able to catch YATRA again when they stopped by Fleetwood’s in Asheville, North Carolina, as they made their way back home. In fact, I was able to sit down with them and engage in a brief conversation about their current events, member’s pasts, and more. The following video contains that exchange, but I feel I need to forewarn you that some external sonics were periodically taking place so you will definitely need to turn the volume up to 11 on this one!

Before you do, the night in question here saw YATRA unite alongside Coffin Torture and Ape Vermin for one hella crushing, live rendering of heaviness. My full synopsis of the show is HERE… so now, tune in and turn up for the Riff Relevant Interview with YATRA!