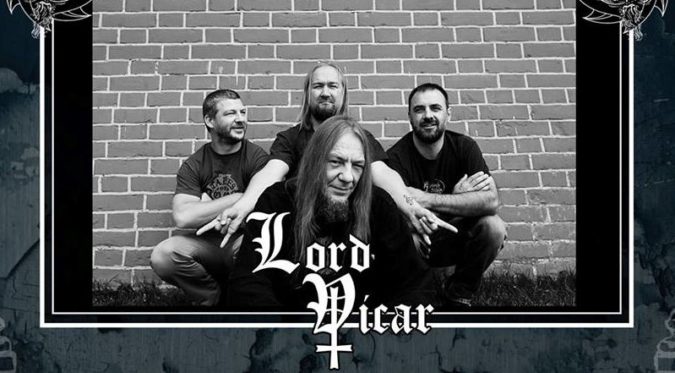 If there is anything that is truly cause for festivity among the denizens of the subterranean doom metal sect, it is certainly the arrival of a new studio album from Finland’s LORD VICAR.

Come May 3rd, The Church Within Records will release the fourth, full-length studio album ‘The Black Powder‘ from the highly revered unit. Like the 2017 ‘Gates Of Flesh‘ album that it follows, ‘The Black Powder‘ was once again recorded by audio alchemist Joona Lukala at Noise For Fiction Studio in Turku, Finland. It features the first studio recording with a somewhat new bassist, Rich Jones, who joined the band in 2016.

The PR release that accompanied news of the imminent album reveals: “The album contains a loose lyrical concept relating to mankind’s endless lack of reason and weakness of stability, resulting to violence, war, manipulation of children, and numbing our minds in order to shut out the horror that is the reality we live in. We blow the black lines to feel good. This takes place generation after generation, in an endless cycle of standing and falling. Musically and lyrically the album covers a wide spectrum of textures from the all-out punky attack of “The Temple In The Bedrock“, fragile beauty of “Nightmare“, to the oppressive menace of the more intense moments of “Sulphur, Charcoal And Saltpetre“. This album is a grower, meant to be listened repeatedly, full of subtle details that reveal themselves with each subsequent listen.”

I can verify that last line is especially true, having now listened to the new album on several occasions, each new round revealing something significant missed the previous listen. There is a defining, return-to-roots feel to the material, while a burdening heaviness is mercilessly inescapable. To discern these qualities for yourself, you need only delve into the new single shared here today with an official video, “Impact“.

Guitarist Kimi Kärki had the following insights about the song and video both to share, saying:

“It was a wonderful Finnish winter adventure to record our fourth album The Black Powder. Pretty much everything was done in February and March 2019, including mixing and mastering, again with Joona Lukala at Noise For Fiction. Everything is still fresh for us as well, and we can’t wait to get to play these monsters live in May! We have had a new bass player, Rich Jones, aboard for quite long now, but this is the first time he was in studio with us. We were able to hammer drums, bass and the first rhythm guitar live, and that adds a nice organic feel for the album. Gareth (Millsted – drums) was more involved in songwriting, and this time we arranged the songs quite carefully in Switzerland before hitting the studio. Chritus (Linderson – vocals) lost his voice before his second studio day, but this medicine that is meant for snake bites healed him nicely.

“We never did a proper video for Lord Vicar before, and decided to do it totally DIY for “Impact”, the seventh track of the album. Studio live footage was an obvious choice for this kind of a hard rocking tune, but I also wanted to give a visual nod for the theme of mortality and how sometimes authors are forgotten and only receive proper fame post-mortem. Nightmares feature heavily on this album, so this is a tribute to some artists who captured the darkness, shadows, and sheer horror in writing. Have a Good Friday, up the hammers, down the nails.”

See and feel the resounding density of the “Impact” video below, while ‘The Black Powder‘ will arrive from The Church Within Records on May 3rd. The album is available to pre-order now at the following locations:

In related news, LORD VICAR will embark upon a European tour supporting Thronehammer beginning the first week of May. You can find the full itinerary further below.