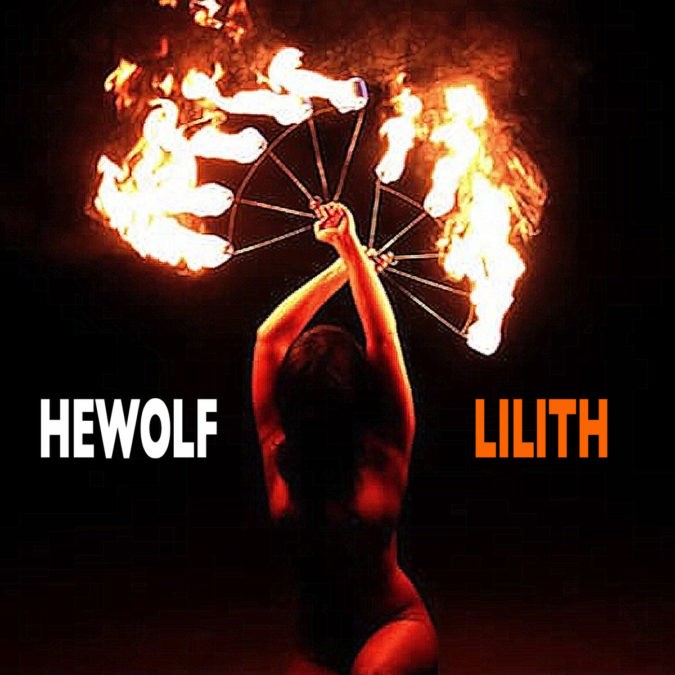 It has been a little over a year since Richmond, Virginia’s HEWOLF landed on our musical radar with 2018’s ‘Live For Minimum Wage’ EP [review].

So, it was a pleasant surprise to recently learn that the trio – composed of alumni from such acts as Darkest Hour, Alabama Thunderpussy, Iron Reagan, Crackhead, The Medusa, Joyburner, and more – are back. Back with a brand new, five-song EP, ‘Lilith‘, the band’s third offering overall, following the one mentioned above and their 2017 introductory self-titled EP, ‘Hewolf‘.

If you have heard or own those earlier HEWOLF releases, then hey, good for you, dammit! Oh, but that is not all, as you will probably notice some obvious, telltale aspects of ‘Lilith‘ that immediately come to the forefront upon first listen. Clearly, the band – bassist and vocalist Paul Burnette, guitarist and vocalist Johnny Throckmorton, and drummer Erik Josephson – have made some serious musical strides since we last heard from them. With ‘Lilith‘, there seems to be more of an emphasis on the songwriting, while a gelling of sorts has taken place within the trio themselves, resulting in five solid and cohesive cuts for our enjoyment.

These guys aren’t jacking around either, HEWOLF lands a throttling knock-out right out of the gate with “Turn Up The Night.” A brief sample from a movie I cannot place** occupies the start of the song, but around fifteen seconds in, the riff lands squarely in your ear space. Not just any riff either, it is an infectious one, the kind that sinks in like a fish-hook and won’t let go. Metallic and surgical in its precision, it rapidly goes to work as an air raid type siren wails in the distance, a seeming cue for the muddy vocals inserted next. The song’s verses come in that type of quiet-cool swagger that so many others find themselves forced to fake anymore, followed by energized, high-impact choruses.

Title track “Lilith” arrives next, sauntering up by means of music that is the lighter, less weighty sibling of thrash. Some unfiltered aggression, with not-too-badly cut cocaine, and this would be a raging mosh pit-inspiring anthem. As it is here, it is still a Grade A, heavy-handed onslaught of muscular riffs, driving rhythmic pulses, and kitbashing drums. In fact, those very same things are applied in abundance to song three, “Tainted Lover“, only getting dialed back a wee bit for those catchy as hell choruses. Not to mention, there are shouted gang vocals in this one, along with some cool, footloose, and fancy-free jamming in the latter part of the song.

We now get to my personal favorite of this EP, the dark overtones of “Don’t Throw Your Fate To The Skies“. Grungy as all get-out, rippling with instrument-borne, sinewy ligaments of interactive guitar, bass, and drumming that holds all things in their place. Powering down for melodic passages and lyrical verses, the song’s feel is that of a slightly doom-fused throwback to the Nineties, through and through.

That doom quality commandeers the reins in full for the album-closing “Made My Own God“, another superb high point on this recording. A slowly moving, slithering discharge of heavy music powered by southern licks, similar to those of Down or Corrosion Of Conformity, this one rides waves resulting from timing and tempo changes. Picking up speed and intensity at certain points, while others let up off the pedal for a bit of coasting at the proper markers. This is an appealing end piece to a remarkably well-imagined, superbly executed third effort here from our RVA trio.

Give the latest HEWOLF EP, ‘Lilith‘, some of your time and attention by means of the stream provided here. There are further streaming options at Bandcamp where this EP, as well as the two earlier HEWOLF albums, are all currently designated as NYP (Name Your Price) items.