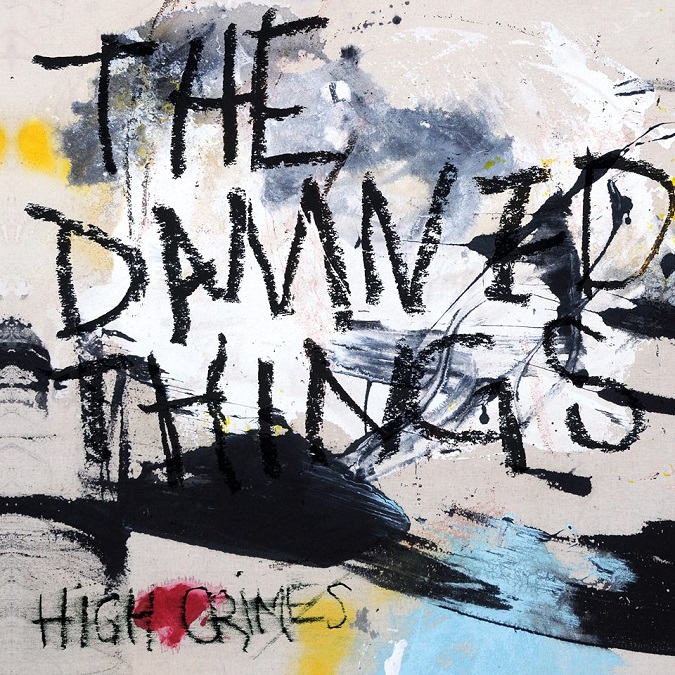 Back in the ancient Roman times of 2010, some metalheads hooked up with a couple of dudes from Fall Out Boy and formed THE DAMNED THINGS, then delivered one of the best surprise rock albums of the year.

Then they got super tired from being dads and having side projects to their side projects, so a collective nine-year break was more than in order. Well rested and gnarlier than ever, the boys are back in town with ‘High Crimes‘. The fact that this heavy hitter came out of nowhere and sounds insanely tight is of no shock to fans of THE DAMNED THINGS.

Hell, just look at the resumes attached: Scott Ian invented the goatee and has been playing the guitar since Noah built the Ark. I bet there used to be two Scott Ians, and Noah put them both on the boat, but the Scott Ian with the longer goatee and filthier riffs was like, “Fuck this asshole, I’m gonna kill him and add him to my chin beard and start Anthrax as soon as we get off this damn ship.”

Joe Trohman and Andy Hurley are both in Fall Out Boy, but I feel like it’s kinda played out to poke fun of that. It’s kinda like making fun of Nickelback at this point. It just feels boring. Respect their longevity and go back to hating Greta Van Zeppelin like everyone else. Besides, they got rich as balls playing in a horrible pop-punk band, so I’m pretty sure they sold their souls to Satan, and THAT my friend, is METAL! Dan Andriano from Alkaline Trio is the new dood in charge of slappin-da-bass, and Alkaline Trio bangs that pop-punk classic where the chorus is “Bitch! Bitch! Bitch!” so he obviously knows what’s up.

Lastly and also leastly, THE DAMNED THINGS were unfortunate enough to get stuck with Keith Buckley of Every Time I Die fame on the vocals. What can you really say about him? Give or take, Buckley is the best singer /shouter /growler /screamer /crooner in the history of hardcore. He flat out knocks every fucking song he’s ever touched out of the park and into the bay (I know he’s not from San Francisco, but home runs are way cooler when they leave the stadium and hit the water, or some vegan in a kayak, for that matter).

‘High Crimes‘ rules. It is the sum of its total parts, while not sounding like anything else the individuals it is comprised of have previously released. It is a riff-driven, sing-along, rocker. The kind of songs where you dump some extra hose water on your head, just before you start windmilling in your driveway while you soap up that used El Camino your wife was violently opposed to. Heavy, but not ETID or Anthrax. Plenty of punk rock sensibility, but not of the pop-driven variety. This is Thin Lizzy on steroids with a case of the blues.

If you’re looking for a place to start, the lead single “Cells” provides a hysterical video and a solid musical representation of what the band is all about. To be honest, these guys know what they’re doing and every song crushes, but “Invincible” (track three) steals the show for me. It highlights the smoothness of Buckley’s singing in an atmosphere structured for harmony, while the rest of the band is soaring on cue throughout. There are plenty of slithering bass lines and nuanced ripples that only make brief appearances, but serve to ensure that the album is anything besides ordinary.

“Omen” is the third single off ‘High Crimes‘ and it basically has all of the cool shit I was just alluding to. The lyric video just dropped at the end of April and is streaming below. Isn’t it funny how a bunch of old dudes with almost zero consistent chemistry got together and basically pissed out what could easily be the best pure rock album of the year?

Man was only meant to read so much; throw on a fresh pair of white New Balance trainers, crack open 39 crispy boys, and go mow your lawn with THE DAMNED THINGS pouring out of the speakers and into a beautiful backyard. They’re on tour this month with CROBOT and HE IS LEGEND. Check the rest of the dates and soak it all in, their next album won’t drop ’til 2055.

w/ CROBOT, HE IS LEGEND