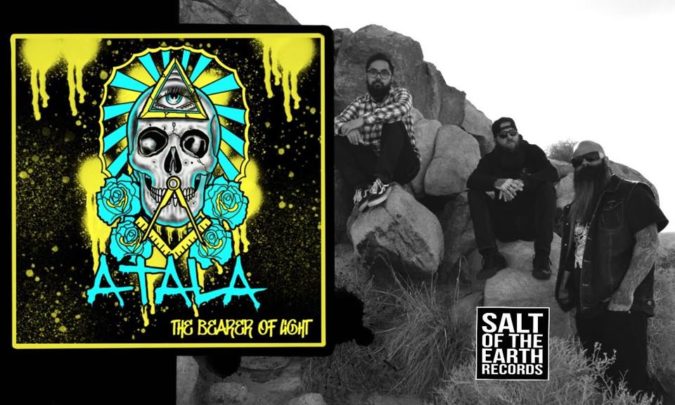 A season of enlightenment arrives as the desert-dwelling, west coast, psych-doom trio ATALA announces a series of imminent actions that begin with the release of their new full-length album.

‘The Bearer Of Light‘ is set to arrive May 21st from Salt Of The Earth Records and will quickly be followed by the band embarking upon a U.S. tour to support the album. They will join fellow Californians, the sinister blackened sludge emitting SIXES, on a summer tour. Along the way, both bands are set to appear at this year’s edition of Maryland Doom Fest, but before any of this happens…

ATALA will release their fourth studio album, ‘The Bearer Of Light“, a seven-song slab of gritty riffs and stone grooves radiating with the molten heat of Twentynine Palms. With a D.I.Y. approach to the recording process, the album was captured and self-produced in just five days with engineer Jeff Thomas at Gatos Trail in Joshua Tree.

Band founder, guitarist, and vocalist Kyle Stratton commented on the decision to record ‘The Bearer Of Light‘ album on his own:

“After working with producers who I admired, I felt it was my time to do it my way while implementing some of the tricks they used. I wanted to record live and not overthink the process. I just wanted to capture the moment take by take. It was a learning process for both the band and myself as a producer. I literally had no idea what I was doing but I wanted the record to have a ’90s DIY feel like the stuff I grew up listening to and I think we achieved that.“

In advance of the new ATALA album’s arrival, Stratton and his bandmates – drummer Jeff Tedtaotao and bassist Dave Horn – unveil the official video for the first single, “Desolate Lands“. The visual clip was created by the band’s friend Zak Kupcha at Circulation Media, it is accompanied by ‘The Bearer Of Light‘ album details. Kyle shared the following about the song:

“‘Desolate Lands’ was written spontaneously in a jam and it was devastatingly heavy. Lyrically, it’s about the desert and our connection to the surrounding landscape and creatures. It’s about understanding that nature is the only true connection we have to any kind of a god or higher power.“

An artist and accomplished tattooist, Kyle Stratton created the intriguing artwork that adorns the new record. He also created some of the incredible artwork for this year’s edition of Maryland Doom Fest.

Having recently heard ‘The Bearer Of Light‘ several times, I can reveal that ATALA discharges punk aggression amid metallic intensity and unflinchingly raw attitude. Possibly their strongest album to date, this is one fortified by both a blue-collar method of self-reliance and plenty of spine. Riveting passages of magmatic guitar, reinforced steel rhythms, and thunderous drums provide a dense heaviness to this music, yet offset with striking atmospherics and mystical alterations.

‘The Bearer Of Light‘ will arrive on CD, LP, and digital on May 21st from Salt Of The Earth Records. Pre-order has begun and is available at the label website and the ATALA website. Find “The Lines Across America Tour” itinerary further below.