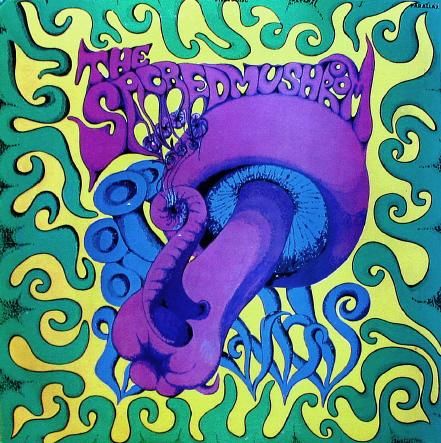 It was the mid-Sixties in Cincinnati, Ohio, the suburbs of Hyde Park to be more precise, when two brothers – singer Danny and lead guitarist Larry Goshorn – formed themselves a band.

With fellow musicians Fred Fogwell (rhythm guitar), Joe Steward (bass), Doug Hamilton (drums), and Rusty York (harmonica) with them, the group took the name SACRED MUSHROOM in 1966. Despite the connotations of their name, the guys played primarily non-psychedelic rock, stuff that is straightforward and inspired heavily by blues, but for the most part upbeat and funky.

The group began playing live in their home region and hitting the local club circuit, where they found fast acceptance and attracted a dedicated following that soon became known as The Mushroom People. Within a couple of years, SACRED MUSHROOM had become a local fan favorite, based solely on their live performances. This was bolstered by the band’s support slots for well-established national acts when they stopped in town, acts like Big Brother & The Holding Company with Janis Joplin, or the Quicksilver Messenger Service.

In 1967, SACRED MUSHROOM signed with a small, independent label based in Nashville, Minaret Records, and released a 45 rpm single, “Break Away Girl” b/w “Yellow Fellow“. The single did receive some airplay on mostly regional radio stations around the greater Cincinnati area and somehow the band landed on the radar of New York’s Parallax Records, a subsidiary of Audio Fidelity.

SACRED MUSHROOM signed a contract with the label for the financing, recording, and release of an album. Working with producer Don Litwin (and Herman Gimbel credited as executive producer), the band recorded and released a full-length, self-titled album in late 1969. As mentioned earlier, despite the band’s name and this album’s Rhea Atkins-created artwork, this music is more centered on blues. The eponymous recording blended six proficiently solid, original songs with two well-chosen covers. The covers are of a classic blues standard, “Mean Old World” (often improperly credited to John Mayall’s Bluesbreakers), and the Kinks’ “I’m Not Like Everybody Else“.

The original compositions are mostly uptempo, no-frills tracks highlighted with excellent fuzzy guitar and pop sensibilities. Tight harmonies, catchy hooks, interwoven acoustic and electric guitar lines, it all makes for thoroughly enjoyable music on an album not too far removed from other acts at the time, like Jefferson Airplane, Sugarloaf, or The Stalk-Forrest Group (who would later go on to become Blue Öyster Cult). Like some other releases featured in Oldschool Sunday recently, ‘The Sacred Mushroom‘ LP has since become the object of desire for many classic music appreciators and album collectors, fetching some shocking resale prices at times. It would also become the swansong effort from SACRED MUSHROOM, as the group disbanded within months of its release.

Things become a bit hazy about several of the band members once that dissolution occurred, though we do know Larry Goshorn would resurface later in the band Mushroom Jones with his other brother, Timothy. In 1973, Larry joined southern Ohio’s Pure Prairie League, with his brother Tim following him in 1978, and both played with the band for years.