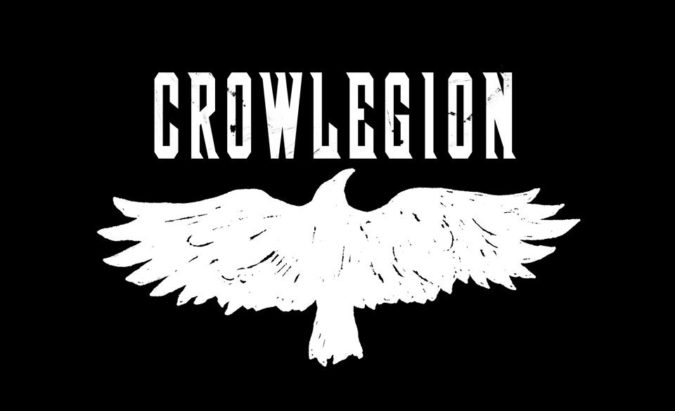 The track hails from the band’s ferocious ‘Northern Hunter‘ EP, released in 2018, and reviewed HERE. The six-song outing is an alluring foray into metallic, oft-times doom intense, sludge with abundant density and possessing ample groove to boot. The best example of this is on full aural display in today’s visual presentation.

We are excited to host the premiere of the “Figures Of Blood” official video from CROWLEGION. It was shot and edited by Robert Hellström (Vokonis, Bombus, Dark Funeral) and finds the band – Linus Pilebrand (guitar and vocals), Peter Jakobsson (bass), and Joakim Hagselius (drums) – musically manifesting a vision experienced by Pilebrand. He elaborates further about “Figures Of Blood,” commenting:

“It was a sort of vision I had, of bloody figures rising from the smoke and aftermath of some sort of catastrophe, to claim their revenge on whatever or whomever caused it… a sort of ‘you thought you had gotten rid of us, counted us out. But scarred, twisted, and damaged we arise, battle hardened and ready to reign down on you and reclaim what you took away from us.'”

Sounds quite the time for vengeance and volatility, themes that could return in the future, as CROWLEGION are currently writing material for their next record. They are also finalizing plans for an upcoming European tour to be announced shortly. Until then, catch CROWLEGION live at the following event: