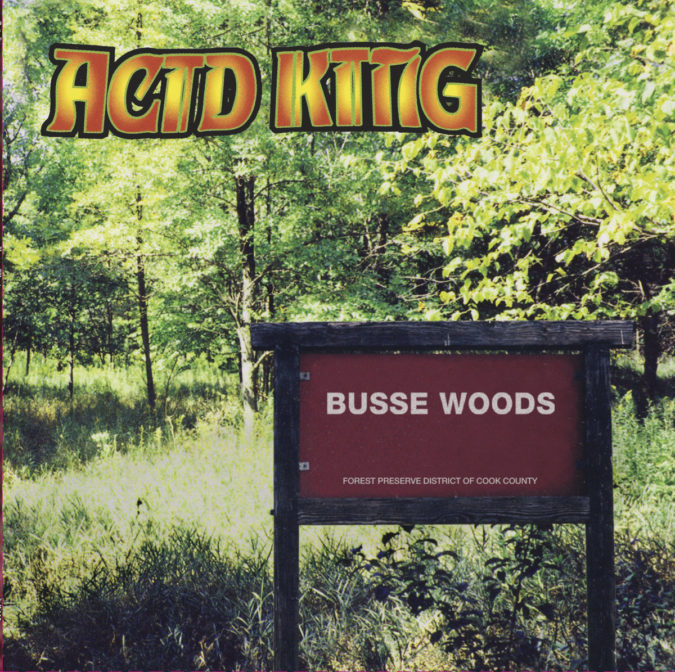 Initially let loose upon Frank Kozik’s Man’s Ruin record label, this follow-up to previous output, 1997’s ‘Down With The Crown’ EP and 1994’s eponymous EP from the band, was an incredible record. ‘Busse Woods‘ was the locals’ name attributed to the Ned Brown Forest Preserve, located near Chicago and a regular haunt for ACID KING guitarist and singer, Lori S., and her friends in their youth. But for Lori and her ACID KING cohorts at that time, Brian Hill (bass) and Joey Osbourne (drums), ‘Busse Woods‘ was a gift, one that became a monumental movement of its very own with time.

Over the years since its arrival, new generations of fans have discovered the album, earning it a reputation as a must-have for lovers of stoner rock and doom metal music. The significance of the record, along with its innumerable accolades and the massive influence it has had, is beyond measure. However, one thing that can be calculated is the years that have passed since it first manifested and 2019 is the 20th anniversary of ‘Busse Woods‘ (streaming below) being bestowed upon the globe.

To properly mark this occasion, ACID KING has announced a nationwide tour that shall see the pioneering trio play the 1999 album live, in its entirety. The tour news arrives alongside word that RidingEasy Records is to re-issue the six-song milestone recording on August 30th. The remastered vinyl release will be available in multiple color variants, with in-depth liner notes and never-before-seen photos.

Lori S. shared the following about these events:

“For the old fans that bought this record twenty years ago, I hope they’re excited to hear the songs all played for the first time like this. By the same token, I hope that a lot of new fans who haven’t heard it live also have a special experience. We’re going out of our way to make it special for everyone. It’s what Acid King was always meant to be.”

The re-release of ‘Busse Woods‘ and the subsequent tour promise to provide an absolutely essential sound and visual experience for fans of heavy music. Joining ACID KING on the live run will be Wizard Rifle and Warish, and you’ll find the itinerary listed below (along with a video trailer for the trek).