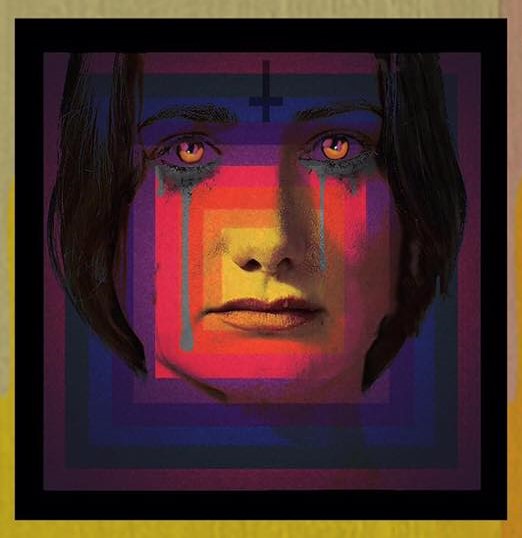 Minnesota, the Land Of 10,000 Lakes (though it is 12,000-ish at last count), called “home” by Vikings and his purple majesty, Prince, recently delivered another enticing lure to the masses.

After five long years since their initial first outing ‘I‘ arrived in early 2014, WOLF BLOOD will return with ‘II‘, a feral hodgepodge of harrowing heaviness, on June 1st via Riff Merchant Records. There is no stylistic label one can easily slap on this band or their recorded output, not without falling short in sharing all of the ground they cover. From blackened doom and stoner metal to psych-rock and progressive sludge, this album profusely bleeds each at some point or another.

The foursome at fault for such, guitarist and vocalist Mindy Johnson, drummer and vocalist Jakob Paulsrud, guitarist Mike Messina, and newcomer bassist and vocalist, Adam Rucinski, enter realms others fear to entertain. They do so in ways that seem without regard for what is expected, nor perceived acceptable in the cliquish domain of underground music elitists. Instinctively, WOLF BLOOD navigate a circuitous sonic routing within each track of ‘II‘, never taking a simplistic, direct path to any one place.

There are no straight lines to any destination, only serpentine coils like those weaving through the opening song, “Lesion“. With abrasive avalanches of frenzied instrumentation from the very start, the song one-eighties for the verses with musically subdued passages beneath Mindy‘s hazy vocals. Circulating with wave after wave of alternating discharges, tempests driven by tribal-like drumming give way to tamer, though no less intense, intervals.

That sonic dichotomy is applied to many of the compositions here, where the music careens within a concentrated spectrum of overall heaviness. Once launched into that place, such tracks as “Slaughterhouse” and “Kumate” lurch under the weight of their own musical density, swaying and animated. Yet, for all of the fervent emanations within the music of a song like “Slaughterhouse“, there is a balance achieved with the headier, dual vocals provided from Mindy and Adam. Paulsrud also shines on this number, his kit-work firing on all cylinders from minor fills and rhythm-inducing cadences, to barrages of stuttering steps.

Gradually, moving toward a critical point 2/3 way through the song, it becomes a buzzing hive wall of sound, gaining and growing. Then… breakpoint! An abrupt cessation of music, but a brief one before the subtle, tamped down guitar intro of “Kumate” begins to unfurl, somber and sullen. Just as it begins to lull you with its caress, a bombastic drum strike cues a growling, gnawing guitar, it is but the calm before the storm. That outbreak comes in the vehement fury of ruminated thrashing that takes over and just as you start to think this is an instrumental, howling vocals arrive in a call-and-response fashion.

Instruments in a state of agitation derive the rapid gyrations of the expedited fourth song “Opium“. At two minutes and twenty-two seconds playing time, the album’s quickest battery is a dynamo of slashing musicality and unique vocals. The latter becomes the highlight quicker than the music itself, with Mindy‘s distinctly signature, lysergic laced deliveries but a part of those renderings. The throaty, hellishly inhuman verbalization that comes is savage, menacing, and supplied by none other than Jake.

“Story Of A Drowning Man” was the first single to arrive from ‘II‘ initially, yet truth is, the fifth song is quite the exception to that which rules most of the album’s contents. That being aggression, of course, and this number is quite lacking in that department, at least at first. It is a good lacking though, the tranquil chill of the music’s meandering nature, its airy quality augmented by an equally elevating installing of lyrics. Simply put and to the point: It is powerful. No less powerful is the moment the serenity is shattered, made more searing by the lingering nuances of what was but a moment ago – now obliterated in these measures of excess and the soaring vocals of Mindy.

Arriving at the lengthiest track, the fatalist finality of “Tsunami” is inevitable, coming in a bit short of twelve minutes running time. Like its namesake, the song subjects us to waves of melancholic sound, streams of ominous outpourings washing over while we wait, transfixed. A post-rock styling is borne upon this flowing current, regulated amid circulating drops of melodic euphony and that which follows it. Drenching deluges of thick, overwhelming riffs, cascading rhythmic rivers, and vocals intoned with a chant-like quality. Before it is all over, the band makes its departure in the same way its arrival was loosed, amid a turbulent frenzy of instruments.

I dare say that perhaps five years between releases is no wait at all, not when compared to the overall magnitude of the work bestowed here. If WOLF BLOOD yield something as excellent as ‘II‘ every half a decade, then it is time well spent if you ask me. The scope of emotions, varied genres, and aural dynamics one may take away from experiencing the album is thorough, but enjoying that experience is paramount. Find that out for yourself in the stream of ‘II‘ provided here or redirect yourself to other streaming and purchase options at Bandcamp HERE.

Speaking of experiences, emotions, and what-not, I know I am looking forward to seeing WOLF BLOOD at The Maryland Doom Fest next month, co-sponsored in part by Riff Relevant. It is one of the stops upon the band’s June tour schedule that is listed below.

MARYLAND DOOM FEST will take place in Frederick, MD. June 20th – 23rd at side-by-side venues Cafe 611 and Guido’s Speakeasy. There is still ample time to make plans and go subject yourself to four days of doom that you will never forget, assuming you survive, that is.

Find all pertinent MARYLAND DOOM FEST 2019 news and details at their official website.