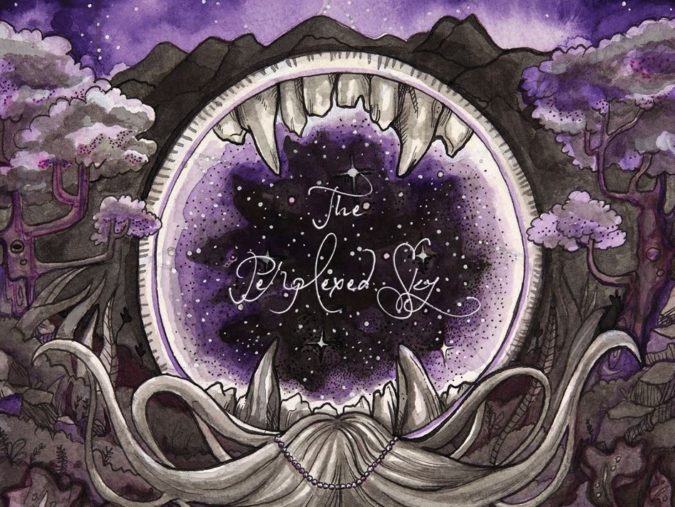 From Charm City (a slogan developed for Baltimore, Maryland in the mid-Seventies) comes something that really does capture and capitalizes on said slogan’s original intent.

UNKNOWN NOBODIES – the Floridian transplants by way of New York to Baltimore – recently (June 1st) and independently delivered their new full-length album, ‘The Perplexed Sky‘. As to why that elevated canopy above us all may be puzzled in such a way, it’s anyone’s guess, for I have no idea… does it really matter? What is not so bewildering are the musical contents on this 11-song recording of potent, contemporary rock goodness.

If you know a little of the background of the duo UNKNOWN NOBODIES, then you are probably aware the band seems to believe that location is everything. They first made waves while still based in Gainesville, FL, with 2015’s ‘Kakistocracy‘ EP, following it with a bite from the Big Apple via the  EP ‘…Or the Devil Will Get You‘. Another relocation in 2017, to the state of Maryland, brings us up to speed and in real-time to the very latest from Jack Murray (vocals, guitar, bass) and Korey Hershberger (drums) some two years later.

‘The Perplexed Sky‘ is a product of its environment, but not so much the external one surrounding its creators. It instead pulls influence and inspiration from the internal. Taking its cues from life itself, once processed through the pair of human beings serving as the filtration system, this music is as organic as it gets. This factor was successfully captured in the Magpie Cage Studio in Baltimore, by none other than the album’s producer, J. Robbins (Clutch, Jawbreaker, Against Me!).

With the resonating, emotional rollercoaster of the introductory title track, we are along for the ride as we experience a gamut of energies and intensities. Truth is, those same two things repeatedly reveal themselves in number after number. One need only take a look at / listen to the second song “Iris” to feel them in their dynamic fullness. One of my personal favorites, the song’s chunky guitars are infectious and its rhythms rousing, a solidly communicable transmission. Then, there are those damned oh-so intriguing lyrics, the kind that inspires one to wonder just what the story behind them might be.

These are things and themes you will find recurring throughout songs like “Violet“, “A Ritual“, or “Jewel“. Each ripple with angsty undercurrents, ones never going full-on inflamed, yet they are there smoldering just beneath the surface. Sure, there are points where things will ratchet up a bit more aggressive here and there, but Jack and Korey always manage to keep things on point.

Without question, some of the best moments on the album come when they indulge melodic proclivities, like those found in “Madeleine“. This is a prime example of UNKNOWN NOBODIES being able to craft catchy, alluring songs and this one definitely possesses the Local H or Nirvana vibes so many allude to when referencing the duo. At the same time, I hear tinges of everything from Bush to R.E.M in this track and others.

The turns toward the remarkable lighter fare can be found further on, in selections such as “The Void Unknown” and “They Dream“. Hypnotic and hook-laden, each is a gravitational source all its own, in the manner where they are impossible not to like in some capacity. “The Void Unknown” is so simple at its core, because – let’s be real – our guys are not out to reinvent the wheel here… they don’t have to. This wheel of theirs is just damned fine as it is, i.e., it rolls, it rocks, and ultimately, it gets you where you want to be.

Other cuts are equally melodious, particularly “Oct. 1st” and the album-closing “Born Evil“, each structured with straightforward, beautiful tones musically and vocally. “Oct. 1st” is a pretty stripped down song, for the most part, delivering its isolated guitars with an accompaniment of mellow vocals and intermittent drumming. There is a slight upswing in things in the latter third of the track, a brief insert of more electrifying activity, yet it dissipates before you know it.

There’s evil going on… somewhere other than the tune that eventually brings things to an end, “Born Evil” seems anything BUT. Acoustic, sedate, reserved, riveting – I feel these are all applicable to describing this standout. With a “less is more” approach, the song provides the ideal settling period, for a coming down from the highs generated as you experience ‘The Perplexed Sky‘.

Will mysteries abound? Shall complicated, involving entanglements arise so high, so, so high as to touch the sky? Uncertain, and perhaps that is the desired contemplation that inspires ‘The Perplexed Sky‘ title. I do not know. What I do know is this is one solid, enjoyable outing, manifested by means of top-notch alternative or indie rock, and that it should appeal to fans of such. Discover if this is you, by streaming the new album from UNKNOWN NOBODIES in this review.