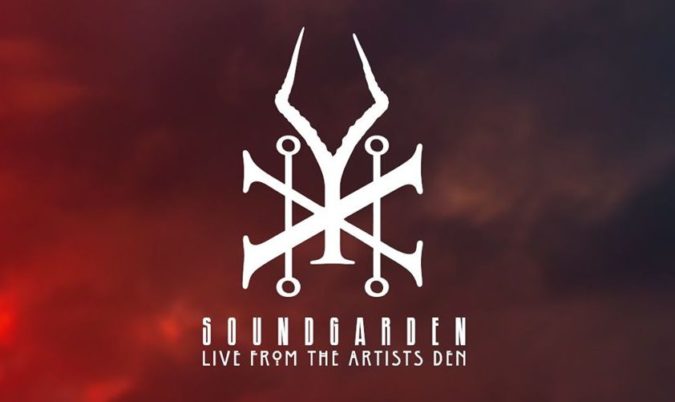 In 2013, SOUNDGARDEN wrapped the U.S. tour supporting their late 2012 album offering, ‘King Animal‘, with a very special show at The Wiltern Theater in Los Angeles.

Taking place February 17th of that year, the career-spanning, nearly two-and-a-half-hour set was comprised of 29 songs, many of which were rarities. The stunning show was filmed and recorded for the “Live From The Artists Den” series and soon will be released to the public in a forthcoming live concert film and album.

SOUNDGARDEN, in partnership with the Chris Cornell Estate and the live music series Artists Den, will release ‘Soundgarden: Live From The Artists Den‘ this coming July 26th. The immersive concert experience will be available in a variety of formats, including a limited-edition Super Deluxe Box housing four LPs, two CDs, a 40-page photo book, lithos of the band, replicas of the show’s All-Access pass and ticket stub, along with the concert film on Blu-Ray. Also featured are bonus band interviews, alongside other memorabilia and collectibles.

This absolute must-have for any fan of SOUNDGARDEN will include other formats like a 4-LP colored vinyl (limited edition), 4-LP black vinyl, a 2-CD set, as well as Blu-Ray and digital live video versions.

Contents include live renditions of several ‘King Animal‘ tracks, such as “By Crooked Steps” and “Been Away Too Long“, along with radio hits like “Black Hole Sun“, “Jesus Christ Pose“, and “Fell On Black Days“.

Also included is a song the band performed live for the first time, “Blind Dogs“, from the soundtrack of the biographical 1995 cinematic drama about American author, poet, and punk rock musician Jim Carroll’s teen years. It is one of the many songs that have never been featured in a SOUNDGARDEN concert film previously and you can see the band’s performance video of the song here:

Vicky Cornell, the widow of Chris Cornell, commented about the original 2013 show, saying:

“This live show was really special, and I know how much fun Chris had that night. The idea of giving fans the opportunity to experience it in its entirety is something I’m proud to share with them.”

Later this month, The Artists Den will screen the concert film during a series of shows to be held in Los Angeles, New York, and Seattle. For the New York and Los Angeles events, the press release promises an immersive “360-degree real-time mix synced to on-screen footage and further complemented by a stunning light show” resulting in “a truly unique experience, for one night only in each city.”

The site of the concert film’s first public screening (June 17th), The Wiltern Theater, has detailed particulars about the event in a press release saying: “… will showcase 12 HD camera angles customized for an immersive multi-screen viewing experience, and includes live remixes of the audio in ultra-high-resolution audio accompanied by a light show.” This same presentation will be repeated the next night at Brooklyn Steel in New York. Then, the film, minus the additional features, will be shown on June 23rd in Seattle at The Showbox, where SOUNDGARDEN reunited in 2010 as the band “Nudedragons” (an anagram of Soundgarden).

Tickets for these productions are on sale [HERE] (as of May 30th) and come bundled with the 2-CD set.

Below you can see the tracklisting and a video trailer for ‘Soundgarden: Live From The Artists Den‘, which will arrive July 26th. All formats of the live album and concert film are available for pre-order now at this LINK.