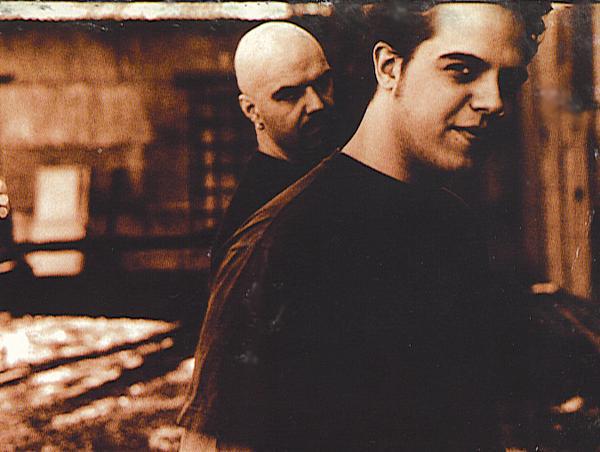 It was 1993, when a rather unique musical pairing found its way into existence as vocalist Patrik Wirén and guitarist/ bassist/ programmer Örjan Örnkloo united as MISERY LOVES CO. in Uppsala, Sweden.

Wirén had previously been a member of Midas Touch, a Swedish thrash metal band that released an album for the Noise Records imprint in 1989. On the other hand, Örnkloo had worked with numerous bands prior, in a number of different capacities. Now unified together within MISERY LOVES CO., the duo were about to embark upon a trailblazing musical experience. It was one that would begin with their recording a single, “Sonic Attack“, for inclusion on a metal-centered compilation, ‘Extreme Close Up‘.

The single generated an incredible response with music fans, so much so that the Swedish record label MNW Zone offered to assist the pair with a proper release. It arrived as 1994’s maxi-single, “Private Hell“, a three-song recording in the vein of rather volatile industrial metal. The agitated state within the pairing’s music is rife with electronic elements, ones melded with abundant thrash metal guitars and a broad spectrum of vocal styles. Like the single before it, this latest outing from MISERY LOVES CO. was also an independent success; enough to draw the interest of an Earache Records recording artist, Extreme Noise Terror, who released a split with the rapidly growing Swedish duo.

This rise in their popularity with fans of both metal and electronic music prompted MISERY LOVES CO. to put together a live touring band. Some of the players brought aboard for their earliest shows in their home country included Jim Edwards (guitar), Marre Ericksson (bass), and Olle Dahlstedt (drums). The latter would be replaced by drummer Niklas Gabrielsson right before MISERY LOVES CO. played their first-ever U.K. show, opening for Clawfinger at the Camden Underworld. This would be followed by show support roles for Warrior Soul and Headswim, but even these events could not prepare the band for what was about to come their way.

It was late 1994 when MISERY LOVES CO. released their self-titled début for MNW Zone, a riveting 11-song journey into a pit of sonic aggression and bleak lyrical themes. Earache Records recognized the appeal the pair had and eventually signed them and re-released the self-titled effort throughout Europe. It was a time when such explosive audibles as Godflesh, Ministry, Skrew, and Die Krupps were receiving warm welcomes from those within the typically exclusionary metal community. That embrace was the same when presented to MISERY LOVES CO., their eponymous album generated large scale critical acclaim and more than enough demand for them to tour America.

They did so with Slayer and Fear Factory, as well as their own touring jaunts that included shows supported by Deftones. However, it seemed Europe was clamoring more for the act, and it is there that tours with Entombed, Paradise Lost, and Machine Head occurred. While all of this was happening, the band issued two EPs through Earache in 1995; the multi-media packed ‘Happy‘ and ‘Need Another One‘, with a song from their namesake album now remixed by artists like Pitchshifter and Killing Joke for the latter release. Another maxi-single also surfaceds during this period, “Prove Me Wrong“.

MISERY LOVES CO. would continue their meteoric ascent with the 1997 release of their sophomore album, ‘Not Like Them‘. Another incredibly successful outing, the record generated several respectable accolades as it reached No.12 on Kerrang!‘s Top 20 list that year, also winning a Swedish Grammis award (the Swedish equivalent of the Grammy Award). Singer Patrik Wirén was named one of Sweden’s biggest rock stars in the leading newspapers and press publications of their home country, as well.

Touring cycles from MISERY LOVES CO. continued, though they began to focus primarily on Europe. The arrival of 2000 was accompanied that year by the band’s third album in March. The Daniel Bergstrand (In Flames, Behemoth, Meshuggah) produced ‘Your Vision Was Never Mine To Share‘ is another well-received accomplishment, one followed by a European tour with Kill II This and earthtone9. Unfortunately, before the year ended, MISERY LOVES CO. announced they were disbanding, and promptly did exactly that.

Though they would become involved in other musical endeavors in the years that passed since that time, MISERY LOVES CO. remained inactive. Then in 2016, from seemingly out of nowhere came the live return of MISERY LOVES CO., storming the stages at the Gefle Metal Festival (Sweden), Bloodstock (U.K.), and Brutal Assault (Czech Republic). This was followed by their inclusion on the world’s biggest metal cruise, 70,000 Tons Of Metal in 2017, and a still-talked-about performance at the Sweden Rock Festival in 2018.

Though it has been 19 years since a studio album release from MISERY LOVES CO. materialized, they have routinely issued new singles since 2016. The songs “Would You?“, “Suburban Breakdown“, and their cover of Garbage’s “Only Happy When It Rains“, revealed a band primed to reclaim their rightful place as leaders of the industrial metal revolution. The songs are rumored to be tracks that will be included on the band’s long-awaited fourth album.

Entitled ‘Way Back Home‘, the album is currently being mixed by Roberto Laghi (In Flames, Entombed A.D.) with mastering by Richard Sporrong. Though no release date has been set at this time, the album’s cover is revealed here, featuring a photo from Anna Ledin Wirén and a design created by Jerker Josefsson. The artwork is accompanied by the recently shared title track, “Way Back Home“, and like all the recent songs since 2016, it features band founders Patrik Wirén and Örjan Örnkloo, joined by guitarist Michael Hahne and drummer Jesper Skarin. More to come…