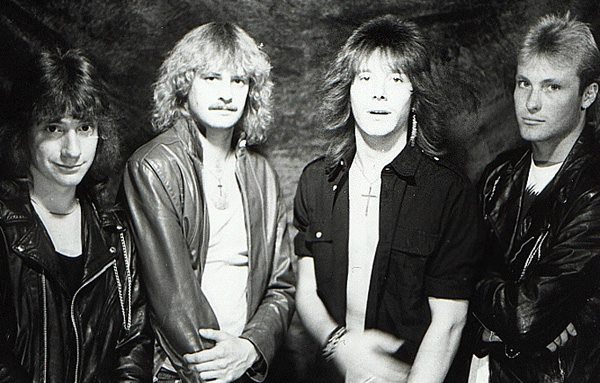 1986: St. Louis, Missouri – This is the time and place that one of metal’s most innovative, forward-thinking entities materialized and began to make their way into the annals of music history.

The KISS loving duo of former violinist turned guitarist and vocalist Kenn Nardi and trumpeter turned guitarist Kevin Heidbreder, along with somewhat KISS appreciative bassist John Emery, and drummer Mike Owen (status regarding KISS unknown) formed a band. They took the name ANACRUSIS (a musical term for a note or series of notes that comes before the first complete measure of a composition; also known as the “upbeat”) and began working to revolutionize heavy metal.

They would eventually tune down their guitars, engage some ambitious songwriting, and craft said songs as intricacy laden audio artistry. Though they remained in a perpetual state of “seeking vocalist”, in their first year together, the quartet was able to record two demos under their own volition and ingenuity, ‘Annihilation Complete‘ and ‘Demo I‘. The following year saw them rework ‘Annihilation Complete‘, adding two more songs to the original seven tracks, and this is when things really begin rolling for our foursome.

With a spotlight on a local college radio show’s “DEMOlition” segment, the latter demo received an enthusiastic embrace with regional metalheads. Soon ANACRUSIS were gigging locally. British periodical Metal Forces magazine votes it the Best Demo Of 1987 and included the band on the ‘Demolition… Scream Your Brains Out!’ compilation album in 1988. Receiving several positive reviews and features in publications, the demo did as intended, drawing the band interest from a few smaller labels. Deciding it would be best to finance their own record and then shop it around, ANACRUSIS entered Holly Hills Studio in Kansas City, MO where, for $1,200 and seven days of creation, their first official, full-length album was recorded.

‘Suffering Hour‘ is a hodgepodge culling together old and new songs from ANACRUSIS, some with origins back to Kenn Nardi’s previous band, Heaven’s Flame. Despite the band not being overly thrilled with some of the album’s production aspects, the owner of Metal Forces mag, Bernard Doe, signed ANACRUSIS to his Axis Records label (known later as Active Records). Not only did the label sign them for a two-record deal, but it also reimbursed the guys their $1,200 investment as ‘Suffering Hour‘ began to make its mark.

The record served as an impressive first glimpse of ANACRUSIS for many, rife with emotion and intensity both musically and vocally. Though never taking the position officially, Nardi was now the de facto vocalist for the band, but his vocals here differed greatly from those on previous demos. Absent were the King Diamond-like falsetto shrieks, in their place, alternating moody cleans and throat wrenched, aggressive heavier ones. The music is just as textural and multifaceted with overall progressive metal styling laced with melodic turns and all-out thrash discharges. The lyrics are quite intelligently constructed, reading like poetic literature and revealing common themes of an often darker nature, ones centering on expectation and sorrow.

All of these would be present in an even more heightened state and a more cohesive delivery on the astounding sophomore album from ANACRUSIS, ‘Reason‘. However, prior to this, a four-song EP of rough mixes of songs under construction, ‘Excerpts From Reason‘, was quickly assembled prior to the band’s appearance at that year’s Foundations Forum.

The band’s second album was recorded in another small-scale studio, Smith Lee Studios in St. Louis, and released in 1990, it followed a pair of demos from the band, 1989’s ‘Quick To Doubt‘ and 1990’s ‘Manic Impressions‘. ‘Reason‘ became the defining stylistic statement for ANACRUSIS, with music fans (then and now) having a great appreciation and reverence for the album, especially then as it drove offers and opportunities for ANACRUSIS. Ones like a large-scale tour as direct support to D.R.I. (Dirty Rotten Imbeciles), but once over the band will experience their first membership change as drummer Mike Owen joins the U.S. Navy and exits ANACRUSIS.

Enter drummer Chad Smith, Kenn Nardi’s former Heaven’s Flame bandmate, and Metal Blade Records. They signed ANACRUSIS and. in early 1991, ANACRUSIS entered their first “proper studio”- Royal Recorders in Lake Geneva, WI – to record the monumental ‘Manic Impressions‘, released that same year. Well, perhaps the NOW monumental might be better, as their third studio offering was one that reflected what ANACRUSIS have always done best… their own thing.

Let’s be honest, sometimes a band can be TOO progressive or too outside the box, at least when it comes to fans of metal music. ANACRUSIS most definitely suffered from this condition at times and ‘Manic Impressions‘ epitomized larger changes taking place in their music. The initial sessions were plagued with problems in the early stages of recording, everything from beginning to use drum machines during the writing phase, to engineers later on that weren’t so well versed with rising digital technology. However, the band and many of their longtime fans felt this album captured ANACRUSIS at their most technical and experimental, despite the band’s continued misgivings about its final mix.

The touring cycle in support of ‘Manic Impressions‘ began with them supporting Megadeth in the midwest and western U.S. Most attendees were unfamiliar with ANACRUSIS and expected to see the originally billed opening act, Alice In Chains, but the band did well in winning many of them over. Their name recognition grew nicely after their next trek, as the opening act on a 38-city U.S. run supporting Overkill’s ‘Horrorscope‘ tour with Galactic Cowboys. This was the very tour that I saw in 1991 when this uniquely diversified trio of acts played the original Hammerjack’s in Baltimore, MD. Yet once wrapped, history repeated itself as Chad Smith was soon to be replaced by a new drummer, Paul Miles.

This was a calculated roster change for Smith, along with the band itself. Both had grown disillusioned with their record label and what they perceived as a lackluster approach in supporting the band and their releases. As Smith was increasingly dissatisfied with ANACRUSIS‘ inability to earn a sustainable income from either record sales or touring, tensions within the band grew. Although amid songwriting mode for their next album, Smith did eventually exit, and while he did not appear on the album, his drum arrangements contributed greatly.

The album in question was, of course, the fourth and final studio effort from ANACRUSIS, 1993’s ‘Screams And Whispers‘. Recorded once again in St. Louis and at first, as was the usual ANACRUSIS way it seems, encountered myriad issues and obstacles. One of the biggest was the band’s choice to return to a smaller studio, as it meant one devoid of some of the latest equipment. This hindered them in the final stages of mixing the record, so when done, the band were less than happy about what they heard and hoped to convince Metal Blade it all needed remixing. The label agreed and suggested they work with Bill Metoyer (C.O.C., Sacred Reich, Flotsam & Jetsam) to get the desired results, which they did.

By the band’s own admission, ‘Screams And Whispers‘ is their favorite release and the one they were most happy with. Most fans of the band also share this sentiment, gravitating toward the band’s first time “ahead of the curve” use of orchestral elements. Melded with the signature components of any ANACRUSIS creation, the album seemed a natural and fitting progression for the band. Unfortunately, as stated above, this would be the final album released from the band as they broke up not long after its release in 1993.

Thankfully, the ANACRUSIS saga does not end there. In 2009, the band’s original line up of Kenn Nardi, Kevin Heidbreder, John Emery, and Mike Owen, announced a reunion show at the 2010 Keep It True XIII Festival in Germany. Also in 2009, Stormspell Records and Days Of Yore released ‘Annihilation Complete: The Early Years Anthology‘ a CD/DVD compilation of early material that included 1987’s ‘Annihilation Complete’ demo, along with other demos, rehearsal recordings, and early live footage.

Limited, select shows followed in recent years, as have reissues and other compilations like the two-disc ‘Hindsight: Suffering Hour & Reason Revisited’, containing re-recorded versions of their first two albums (streaming above). We now ecstatically share news of a new round of re-releases from ANACRUSIS.

ANACRUSIS announced the re-release of all four albums from their discography: ‘Suffering Hour’ (1988), ‘Reason’ (1990),  ‘Manic Impressions’ (1991), and ‘Screams And Whispers’ (1993). All albums were remastered and will be released on vinyl and CD (with bonus demo tracks) through Metal Blade Records.

This recent news was accompanied by the following commentary from the band:

“We just wanted to say the albums have all been remastered and are on schedule for the coming Metal Blade reissues. We don’t have a concrete date yet or all of the details, but we can say that all four albums will be released on high-quality vinyl and on physical CDs (with CD-only bonus demo tracks).

Due to the length of the recordings and the fact that Metal Blade Records did not want to compromise the audio quality, all four vinyl releases will be double albums. Reason and Screams And Whispers will be full 4-sided LPs and Suffering Hour and Manic Impressions will be 3-sided LPs with an etching on side 4.

The vinyl versions will all feature the original track listings aside from Suffering Hour which will also include the “lost” cover version of Black Sabbath’s “N.I.B.” (which was recorded during the Suffering Hour sessions (but was never included on the original release).“

There you have it, ANACRUSIS loving faithful fans and soon-to-be converts! The past of this most important band, as well as an upcoming plan, both of which are integral to any true fan of heavy metal.