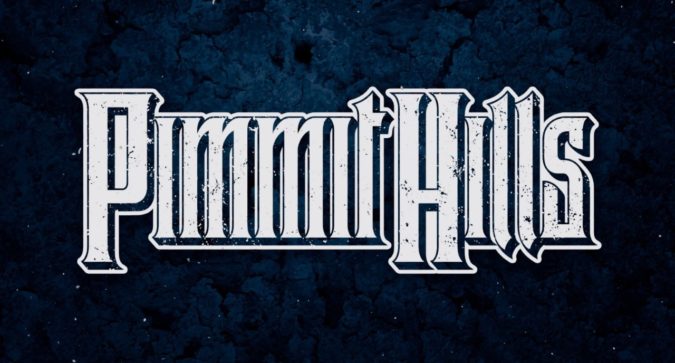 In my humble opinion, D.C. / Virginia’s King Giant was one of the best southern metal bands to ever grace a recording or a stage either one… and yes, I did say “was”.

After an impressive twelve-year run that bestowed one demo, one EP, and three critically acclaimed full-length albums upon the music-loving masses, King Giant has officially announced its demise. Fret ye not though faithful ones as four of that band’s five members – David Hammerly (vocals), Todd Ingram (guitar), Floyd Lee Walters III (bass), and Keith Brooks (drums) – announce they shall continue their work together. Yes, rising from the ashes of the beloved King Giant like some phoenix of fresh, new empowerment comes PIMMIT HILLS!

After the amicable departure of guitarist David Kowalski from King Giant in 2017, the four weighed the continuation of the band but felt that sans Kowalski, things just would not be the same. Instead, the quartet decided upon a new course of action altogether, one requiring a new name, something that was addressed collectively by the band in the following statement:

“In late 2017 David Kolwalski told the rest of the band that real life responsibilities were making it increasingly harder to participate in King Giant. Eventually, he left the band but encouraged us to continue with King Giant. While we didn’t want him to go, we all understood and respected his reasons for doing so. We are very proud of the music we’ve written and recorded together, and we wanted to respect that collection of work as well as the fans that supported it. Since we knew we wouldn’t be playing those songs without Kowalski, we decided to start a new band rather than continue as King Giant.“

“Deciding upon a new name wasn’t easy, but PIMMIT HILLS made sense to us since we’ve been writing and rehearsing at what we call “The Compound” in Pimmit Hills, Virginia for many years now. It’s home to us and meshes well with our aesthetic – southern-flavored heavy blues, Appalachia, and Americana in decay.“

PIMMIT HILLS is not wasting any time either, hitting the ground running with writing songs and booking shows. The band will be entering the studio in the fall to record their début album with J. Robbins (Jawbox, Clutch, Government Issue) at Magpie Cage Studio, with an anticipated release in early 2020.

PIMMIT HILLS will play their first-ever live show on July 13th, 2019, in Washington D.C., with more new shows to be announced in the weeks ahead.