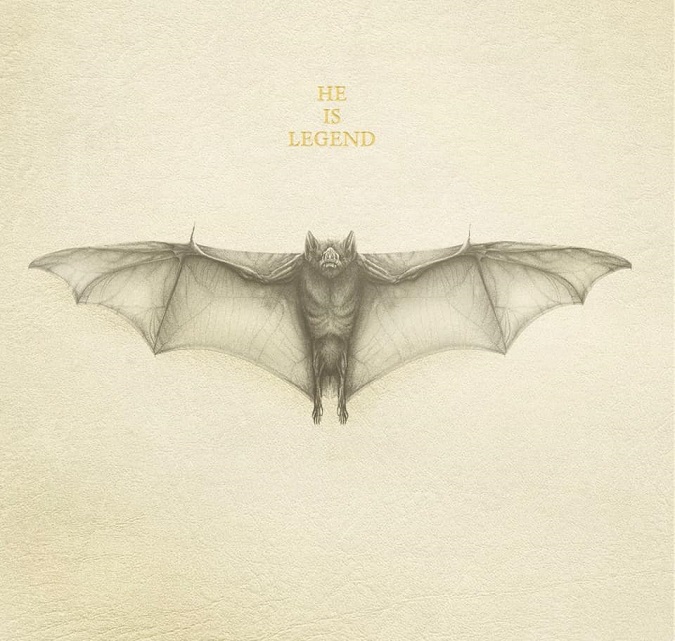 Nothing kills my mood quicker than people who refuse to get hyped about an album that shreds in abundance.

Don’t play it cool and give something an 8.5 or a 9 because you think your 10’s are like a magic bullet made out of unicorn tusk and you can only fire like three of those fuckers per decade. HE IS LEGEND just dropped their sixth full-length album ‘White Bat’ on June 28th, and to call it anything other than perfect would draw the ire of my side-eye quicker than Cory Booker on Beto for flexing his Spanish.

The lead single and title track, “White Bat” is an amped-up version of the hardcore and southern fused riffs the band unleashed on fan-favorite ‘Suck Out the Poison‘ (2006). Song two, “Burn All the Rock Records” might be the heaviest hitter on the album. It embodies the savvy, genre-hopping dexterity HE IS LEGEND has been banging heads with since the ’90s.

Other stand out tracks include “Boogiewoman” (official video below), “Eye Teeth“, and “Resister Resist Her“. Lead singer Schuylar Croom is in total control of his voice whether he’s breaking out his distinguished raspy croon, or just ripping. Musically, the band – Adam Tanbouz (guitar), Matty Williams (bass), and Jesse Shelley (drums) – continue to find new ways to challenge him by churning out a diverse ensemble of music.

In a weird way, ‘White Bat‘ plays like a refined version of their greatest hits. There are some monster riffs and heavy breakdowns, but the band continues to push forward with a polished adaptation of the heavy radio rock sound that found a steady home on ‘It Hates You‘ (2009), ‘Heavy Fruit‘ (2014), and ‘Few‘ (2017). This is peak HE IS LEGEND.

The boys from Wilmington, North Carolina went as big as possible. Similar to Michael Jordan’s Hall of Fame speech, this is a banger that eviscerates everything in its path. I have no need to lie to you, but if you don’t believe me, consider this: I saw a dude buy a full-size Reaper scythe and clear his whole fucking yard to this record.

‘White Bat‘ is available now through Spinefarm Records in various physical formats and bundles, as well as digital download and streaming – order now.

HE IS LEGEND on: