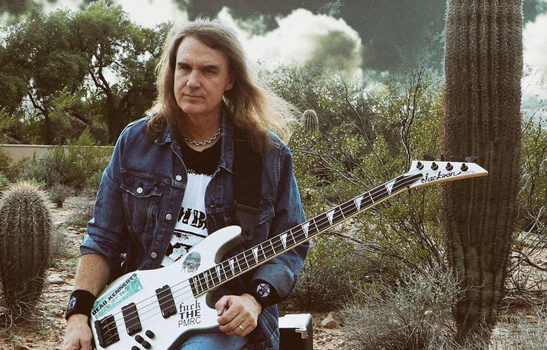 “Hammer Comes Down” is the newly issued single and lyric video from Megadeth bassist David Ellefson.

The track is taken from ‘Sleeping Giants‘, the impending companion album for Ellefson‘s new biography, ‘More Life With Deth‘, which is expected to land in stores on July 16th from Jawbone Press.

The upcoming book offering is the follow-up to Ellefson’s highly successful 2013 literary work, ‘My Life With Deth: Discovering Meaning In A Life Of Rock & Roll’. While anticipation for the book’s arrival continues to grow, there is equal excitement for the guest-packed two-disc ‘Sleeping Giants‘ which is set to arrive from Combat Records shortly after the book (July 19th).

The classic record label was recently revived through Ellefson’s EMP Label Group, David’s musical venture with Thom Hazaert, who co-authored ‘My Life With ‘Deth‘ and provides vocals on several tracks on the accompanying album.

‘Sleeping Giants‘ will be a retrospective featuring several new tracks, plus a collection of demos and unreleased material from other Ellefson projects such as F5, as remastered by Richard Easterling.

It will be partnered with a second bonus disc that will feature a compilation of EMP and Combat Records artists, including Last Crack, Hatchet, Wrath, Marc Rizzo, Doyle, Mark Slaughter, Ron Keel Band, and more. They will feature artwork and photos by Melody Myers who has captured stunning images of such artists as Marc Rizzo, Escape The Fate, and many others in the past.

“It was great to reconnect with Chris, musically and personally, who is still, and always has been, one of the most innovative players in metal.

“When we were working on putting together the record, Thom had brought up the idea to Chris of him playing on a track, and somehow it all worked out. Add some killer solos from Chris Poland, on to a song that already features Mark Tremonti, Dave McClain, and Eric AK from Flotsam & Jetsam, and you can only imagine how incredible it came out. It’s truly an epic collaboration, and we couldn’t be more excited about it.“

Check out “Hammer Comes Down” below and find ‘Sleeping Giants‘ available from Combat Records on July 19th. David Ellefson‘s new book, ‘More Life With ‘Deth‘, will arrive via Jawbone Press three days prior, on July 16th.

In related news, Ellefson recently announced the addition of more dates to his 2019 “BASStory” Tour, including stops in Baltimore, MD, Indianapolis, IN, and Minneapolis, MN. The tour features a book question-and-answer session with David Ellefson and Thom Hazaert, plus an intimate full-band set that includes Hazaert, plus Dead By Wednesday’s Opus Lawrence (drums), and Dave Sharpe (guitar), and Hatchet guitarist Clayton Cagle. Support in various cities will be provided by EMP Label Group and Combat artists, including LAST CRACK, WRATH, GREEN DEATH, ARCHER NATION, CRAWL, and VOODOO TERROR TRIBE. Find the tour’s itinerary further below.