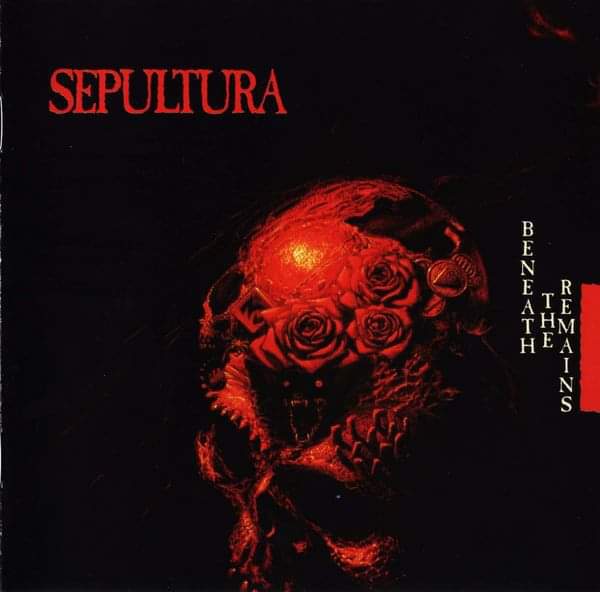 Discovering new bands from other countries is something we take for granted now, but in the ’80s it was quite a bit trickier.

Now, everything under the sun is only a click away, but in those what-feels-like-a-lifetime-ago years, information on up-and-coming bands from foreign lands traveled across the oceans like intrepid explorers, hoping to make landfall and entice the natives with their wares.

SEPULTURA was an outlier of things to come, the tales of their Slayeresque thrash supremacy first coming to our shores in only whispers, which eventually grew to a roar. At the time, Brazil might as well have been on Mars, for all Americans knew. ‘Beneath the Remains‘ was the band’s breakthrough in the States, Roadrunner Records gambling on the intense interest being shown to the young Brazilians by tape-traders worldwide.

The ominous-looking cover art made for a compelling first impression to the uninitiated, evil intent practically dripping off the vinyl before it even made it to the turntable. And once the needle hit the record, nothing would ever be the same again for the underground metal scene. Oh, SEPULTURA didn’t do it alone, but between them and the shadowy Pandora’s Box of Scandinavian death metal that infiltrated and seized power across the U.S., a tipping point had been reached, one that would never dissipate or be satiated.

This album epitomizes the golden age of thrash, where the riffs changed about once every four seconds, and we all just grabbed ahold of whatever was within reach and held on for dear life. The haunting acoustic guitar arpeggios that kick off the opening title track were already a familiar trope by 1989, but the sheer brutality with which SEPULTURA invert and undermine the gentle feel of the initial moments here was much rarer.

Max Cavalera‘s primitive war cries made no attempt to ingratiate themselves or ease the listener in-this was an all-out assault that would only accept complete and total surrender. The guitar solo of “Beneath the Remains” was a repudiation of all melodic values-chaos and cacophony reigning supreme, making the subsequent twisted yet ear-catching riffs all the more surprising. This section of the song exudes an almost classical vibe, reminiscent of the best moments from ‘Master of Puppets‘ or Randy Rhoads. SEPULTURA may have been a bestial entity just emerging from the jungle floor, but you had to admit they had impeccable taste.

“Inner Self” found the band slowing its attack and making every hit count. This was a much more familiar sound to American audiences and was just the ticket to get the uninitiated used to the gritty death-thrash hybrid that dominated the album. There’s nothing wrong with being catchy if you can still beat the listener into submission with a few vicious riffs. Impact is what counts, not virtuosity. Not that SEPULTURA were slouches in the guitar department. The stop-start grind and endless time and tempo changes they flaunt here would make most jazz-fusion bands green with envy.

The band was acting from a place of instinct, erecting temples of sound and fury one heavy stone at a time. Metallica’s ‘…And Justice For All‘ is often singled out as THE preeminent example of a band throwing a million riffs at the wall and seeing what sticks, but ‘Beneath the Remains‘ is a strong contender for that crown, the Brazilian youngsters introducing and endlessly permutating their guitar patterns in peculiar and striking ways. The almost progressive thrust of the album asserts itself fully on “Stronger Than Hate”, the band juggling groovy, mosh-inducing sequences mixed with out-there forays that wouldn’t be out of place on a Voivod album. Max Cavalera and Andreas Kisser remain an undervalued tag-team in the annals of thrash metal history, and that’s a crime.

The rhythm guitar clinic put on throughout the album remains a high-water mark in the genre, “Mass Hypnosis” being a fine example. The song is built on a tightly chugged low E string, varying tempo and contour, Kisser adding a few dissonant notes high above the fray, strafing from above while Max continues his ground assault. The thematic solo rises and falls, unusual intervals and melodic ideas being tried on for size, themes arriving and departing without so much as a glance back.

This was always a big part of the appeal of thrash for me. The leaders of the genre had a knack for throwing out riff after riff, a never-ending cycle of ideas that they weren’t precious or stingy about, knowing that the next section was only another chance to up the ante even further, confident in the knowledge that they could write more mind-bending rhythm parts at the drop of a hat.

Another hallmark of the genre was the use of extended musical intros, the bands only getting around to the lyrics when they were damn good and ready. It’s almost two minutes of galloping riffs, slip-sliding octaves, and speed-picked melodies in “Sarcastic Existence” before Max barks his first words. The intense “Slaves of Pain” starts quickly, then doubles up on the notes to make us feel like we’re going to down under the unending stream of notes that are showered down upon us. Kisser unleashes another dissonant leap into the unknown, scrambling our brains with his aggressiveness and blatant disregard for traditional solo structures.

“Lobotomy” blasts us with Igor‘s insane kick drum work, the song raging out of the gates, daring us to keep up. The sophisticated harmonies and unorthodox intervals in Andreas Kisser‘s legato-laden solo show the musicians to already be pushing themselves to produce greater and greater music, counterbalancing the more advanced ideas with primitive, bludgeoning brutality.

The almost unending stream of ideas gives “Hungry” the kick in the pants needed when most bands would be running out of steam this far along into an album’s run time. The use of thematic lead lines once again injects life in the closer “Primitive Future”, Kisser showing off a compendium of flashy guitar techniques similar to Kirk Hammet’s prog-metal inclinations found on Metallica’s more adventurous albums.

The old adage “Less is more” must not translate in Portuguese, because SEPULTURA didn’t get the memo. The band crams more musical ideas on this disc than many metal bands do in their entire career, but the songs still detonate with deadly efficiency. The production of death metal maestro Randy Burns was powerful but unobtrusive, leaving the music to speak for itself. And oh, how it does.

This was SEPULTURA‘s chance to step onto the world’s stage, and they did so boldly, with no half measures. ‘Beneath the Remains‘ was a groundbreaking record that transformed the band’s fortunes overnight. Before technology shrunk the world with its inescapable grasp, SEPULTURA was already making metal music a worldwide affair.

Some things are simply undeniable, and the vicious nature and unique songwriting SEPULTURA display here is one of them. There was a storm about to overtake the globe, and SEPULTURA was both a barometer and contributing factor to the devastation that was to follow in the coming years.