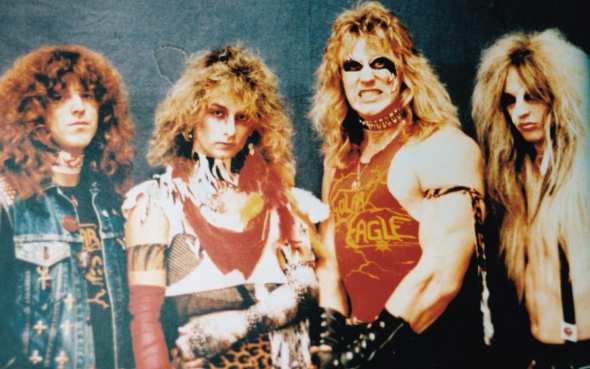 Influenced by such classic acts as Judas Priest and Iron Maiden, the style of SOLAR EAGLE is not all that far removed from their inspirations. Very guitar-centred and featuring dynamic, higher registry vocals, the band were soon making waves in their home region. By 1988, they managed to record and independently release the six-song ‘Charter To Nowhere‘ demo, limited to 500 copies on cassette. Reminiscent of other such rising acts of the time, ones like Sanctuary, Helstar, or Omen, SOLAR EAGLE were quickly embraced by Canadian metalheads.

Despite the demo’s solid songwriting and powerful songs melding classic elements with semi-melodic thrash qualities, none of the songs would be included on the band’s official introductory release (at least not with the original titles, if so). Recorded and mixed by Tod Combe, and engineered by Brian Gagnon at Certain Circle Studios in Scarborough, the eponymous effort also arrived in 1988, another independent offering in a four-song, 12″ vinyl record.

SOLAR EAGLE remained a more regionalized band at the time, developing a large, loyal following and fanbase in the greater Toronto area. A regular live act on the music circuit there, they managed to rework the material from their original demo when not onstage blowing fans away with their speed metal wizardry. In time, 1989 to be precise, ‘Charter To Nowhere‘ became the sophomore album release from SOLAR EAGLE, as well as their last.

Though touted to become “the next big thing”, SOLAR EAGLE somehow managed to stay free of the corporate record industry, despite its interest in the band. Though the band never officially broke up or announced an end to their existence, they sort of faded into the sunset of heavy metal history. In 2014, Skol Records compiled both of the band’s releases on to a single split, remastered by Bart Gabriel, in a limited edition CD release.

SOLAR EAGLE still maintains a large cult following and their ‘Solar Eagle‘ LP, if you can find one, is considered one of the holiest of holy grails of Canadian Metal. The band and their releases are the regular targets of unscrupulous bootleggers who create unsanctioned and unlicensed rip-offs.

In 2017, a posting from “Axe” Renwick on the SOLAR EAGLE Facebook page eluded that “We are talking about a new record and I will put up some more demos… THANX SO MUCH FOR YOUR SUPPORT!” but any follow-up has yet to occur.