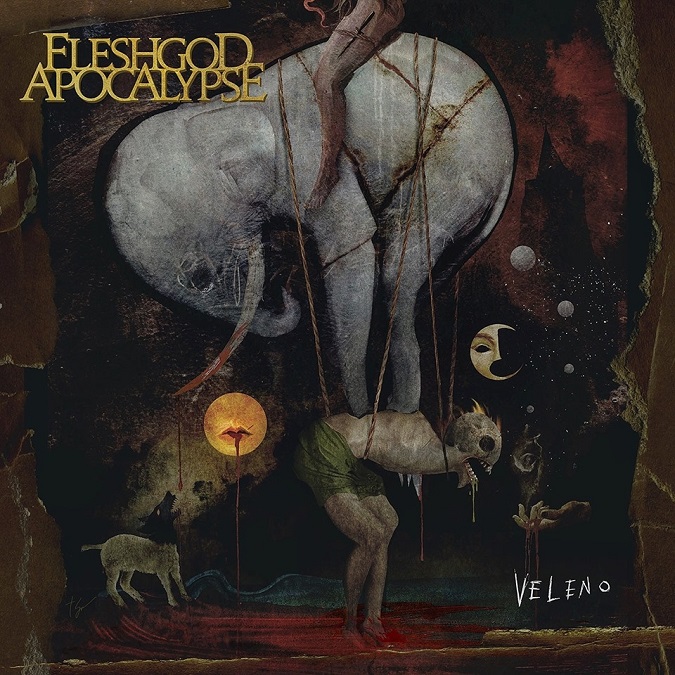 Few are making the kind of strong, intelligent, intellectual, and verbally sophisticated social commentaries that Italian orchestral death metal veterans FLESHGOD APOCALYPSE (a subgenre you never knew you needed, but you do) are making.

On ‘Veleno‘ (Italian for “venom”), their fifth album, their vision coalesces into a whole that’s at once beautiful, thought-provoking, and savage.

Formed in 2007 and led by singer/ guitarist/ drummer Francesco Paoli, bassist and clean singer Paolo Rossi, and pianist Francesco Ferrini (along with guitarist Fabio Bartoletti and drummer David Folchitto for live performances), the band brings a baroque choir, a classical percussionist, and a string quartet into its midst.

But there is no real distinction or sonic separation between the guitar, bass, and drums and the orchestra – the mix serves to create one big melange of sound as the electric and acoustic elements blend seamlessly. Their bridges and solos are breathtaking, moments of glory and joy. Their lyrical despair and frustration with today’s divided, chaotic world is apparent from the start and doesn’t let up throughout.

“Fury” is a blistering condemnation of science deniers and those who choose to remain uninformed (“the sludge of mediocrity,” “the vortex of ignorance”) and a plea for Reason to “rule again this miserable world.” The second verse references Galileo and Descartes (the philosopher who saw “an individual’s mind, separate from the body and the outside world, thinking about itself and its existence”) and takes a slap at “the idiotic herd” that “stubbornly sink(s) rotten roots in their dry flat earth.” The glorious bridge, soaring and hopeful despite the pessimism of the lyrics, is a musical touch they go to frequently.

“Carnivorous Lamb” – talk about a play on words – is sweeping and slower in tempo, with lush piano and orchestration. Its lyrics are a host of contradictory images (“White snow turned into coal,” “Heaviest lumps of lead soar”) that serve as perhaps a commentary on how evil hides in good or beauty or that we have both in our nature and one can turn into the other with ease.

In the wake of the opioid epidemic, “Sugar” is a passionate decrying of drug abuse, agonizing, hellish, frantic, and metaphorically accurate. The orchestra is pushed to ultimate speed as the witness narrator watches, with horror and maybe even some sick encouragement, as the character destroys himself.

“Monnalisa” is an outstanding and effective deviation in theme and tempo from the rest of the album. Lushly melodramatic, it boasts stunning twin guitar harmony, operatic female vocals courtesy of Veronica Bordacchini, and piano – and naturally, it modulates in the last chorus and exits with a big beefy outro. It’s got it all musically and it all works.

It’s an almost tongue in cheek look at love, a preening male character (“I was born to rule this world / A mother nature’s wonder / Ready to shed my brother’s blood”) left powerless by his love (“Yet still your doormat”) and her sexuality (“In line towards the womb / The draining march of the spineless”). Three are some other very clever sexual references (or at least I see them as such) in there as well that I’ll let you guys puzzle out.

“Worship and Forget” is a sneering condemnation of religion overall and sexual abuse by priests more specifically (“Killing, starving, violating uncorrupted flesh / They prosper protected by the blessing of a god of nothing”), and how religion almost permits bad behavior if you just repent later (“Acquitted by self-fabricated verses they ravage”). This might be a well-trodden theme these days, but FLESHGOD APOCALYPSE distinguishes themselves with that trademark vicious, cutting wordplay.

“Absinthe” is a devastatingly witty repartee between the drink and its addict (the “Sailor”), with Paoli playing the drink and Rossi playing the hapless victim, the artist searching for inspiration in the mind-altering substance and finding only woe. It’s genius, not just in the lyrical and musical execution, but in the dead-on commentary in lines like “Life is a sip, I guzzled it all” (boasts the Sailor) and “To kiss the moon, this is the price” (snarls Absinthe). Brilliance.

“Pissing on the Score” might be the most personal of all the songs. It bemoans the decay of art and deep thought (“Gone are those times when revolutions / Led by intellectuals / Subverted certainties for grace” and “Dried is the pen as much as the inkwell / Affected by a creative drought” – how great is that?) and proudly proclaims the band’s attempts to forge their own path – that is, “pissing on the score.”

“The Day We’ll Be Gone” is a dirge-like solo turn by Bordacchini that turns into a duet with Paoli. The chorus seems to borrow from opera, the two singers playing off each other, each line she sings paralleling and leading into each line he sings and taking each couplet to the next idea. Bordacchini sings of the inevitability of death and grief, while Paoli roars out his counterpart – the need to live each day with meaning before it’s all taken away.

The final track, “Embrace the Oblivion,” is maybe the perfect thematic continuation of “The Day We’ll Be Gone” – if climate change continues, that will certainly be “the day we’ll (all) be gone.” The aching, pleading bridge is a lyrical call to action lifted by an optimistic guitar melody. Its damning, broken-hearted chorus, echoed beautifully by the orchestration, fades out to Ferrini playing the chorus’s wrenching melody on solo piano, then the final instrumental that is the title track.

In the band’s Nuclear Blast bio, Paoli says that from the outset, FLESHGOD APOCALYPSE “wanted to do something important with our music.” ‘Veleno‘ is that “something important” – it is at once deeply European in its perspective and profoundly worldly in its outlook. It is angry and poignant and very special – don’t miss it.