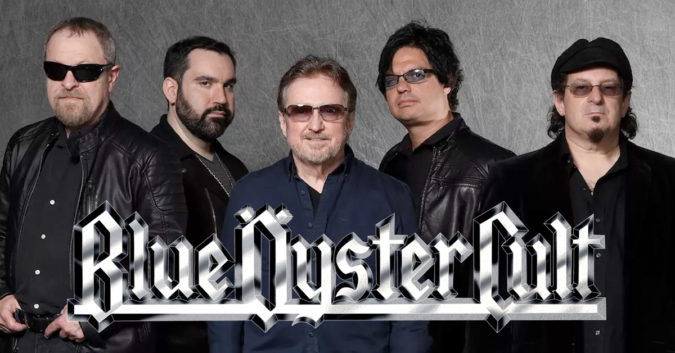 With a career spanning nearly five decades, these globally revered recording artists are endeavoring to build upon their acclaimed legacy with the Italian-based record label. Without question, BÖC occupies an exceptionally unique place in the annals of music history as both pioneers and adulated mainstays. As one of the very few hard rock/heavy metal bands to earn both genuine mainstream critical acclaim, as well as commercial success, BLUE ÖYSTER CULT now prepares to continue their sonic residency.

By all outward perspectives, 2020 promises to provide fans with a new studio album from the contemporary incarnation of the band. It is one comprised of BÖC‘s original core duo of visionaries, vocalist and lead guitarist Donald “Buck Dharma” Roeser, along with vocalist and rhythm guitarist Eric Bloom. The duo is joined by Richie Castellano on guitar and keyboards, and the longtime rhythm section of bassist Danny Miranda and drummer Jules Radino.

“It’s been a long time since BÖC’s last studio album. Our biggest question from fans is ‘when are we going to do some new music?’ So we are ready to take this journey again. Recording with Danny, Richie and Jules should be a great experience as we’ve been touring together for years and Buck and I are looking forward to including them in the creative and recording process.“

“The current band is GREAT and has never been recorded other than the live concerts, so we feel now is the time for new songs to be written and recorded. About half of the songs for the new record exist and the rest will be finished during the process,” adds Buck Dharma.

Over time, many people have grown to doubt that a new studio album would ever materialize from BLUE ÖYSTER CULT. Their last official outing was 2001’s ‘Curse Of The Hidden Mirror‘, but any as-yet-untitled release will not be the only thing to arrive from the band next year. Fans can also expect to see remastered reissues (some with updated artwork) of four classic BÖC releases including:

Additionally, the band will present five new live releases in 2020 which include:

The body of work available to the band dates back to the release of BÖC‘s self-titled début album in 1972. From there, it spans twelve subsequent studio records. Some of rock’s most recognized numbers were gradually bestowed to the music fans of the world from these records. They include the haunting “(Don’t Fear) The Reaper” from 1976’s ‘Agents Of Fortune‘, the catchy “Godzilla” from 1977’s ‘Spectres‘, and the ethereally melodic “Burnin’ For You” from 1981’s ‘Fire Of Unknown Origin‘.

In related news, BÖC is embarking on an extensive North American tour that got underway today; find the itinerary below. On a personal note, some readers may be aware of my own fanatical affinity for BLUE ÖYSTER CULT so needless to say, I am quite ecstatic about today’s news.