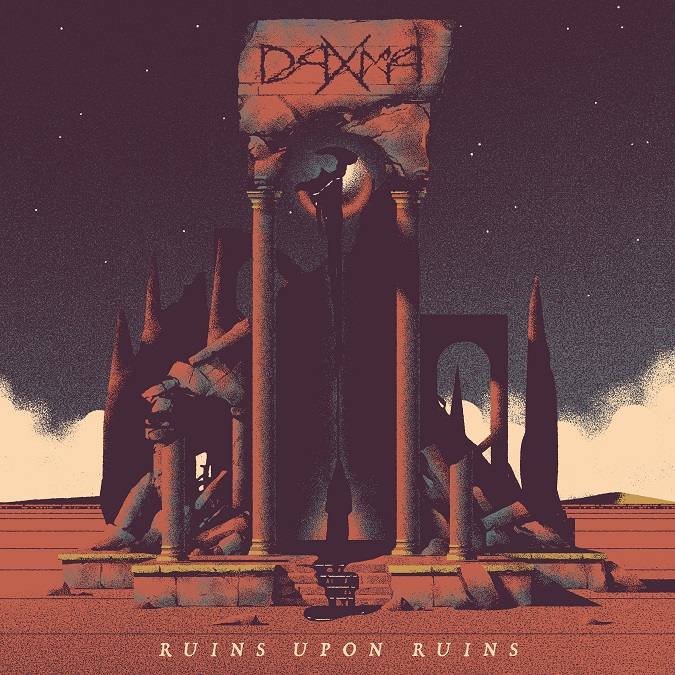 Certain music will cause catharsis for some people. It provides you with an almost out-of-body experience that seems to purify your senses. A physical and psychological reset button, if you will. DAXMA is one of those bands for me.

DAXMA (pronounced [dahk-muh]) is an Oakland, California-based post-rock/ doom metal band that began in Santa Cruz, CA in 2014. A collaborative project made up of members – Jessica (vocals, guitar, violin), Kelly (vocals, bass), Isaac (vocals, guitar), Forrest (guitar), and Thomas (drums) – sharing a varied musical background, including black metal, psych, and classical. DAXMA unites nuance and fragility within a framework of devastating crush that imbues significance to each motif and passage.

Arriving on July 26th from Blues Funeral Recordings, ‘Ruins Upon Ruins‘ is the third release from DAXMA. The EP brings nearly twenty-five minutes of neural captivation engulfing the emotional borders of the past and present, conjoining the personal and inspirational sides within DAXMA to highlight the art of critical thought.

The band explains a bit about the new release:

“Ruins Upon Ruins is thematically a response to the Hegelian outlook of our last album, ‘The Head Which Becomes the Skull’, which adopted a dialectical method to its movement. The title is taken from a line in an essay called ‘On the Concept of History’ by Walter Benjamin, who, disputing Hegel’s notion of history as the story of progress, writes about an angel of history looking backwards towards the past.”

“Minima Moralia” is a meditation of ideological vision, and even as it comports with genre in its progressive and weighted aspects, it looks outside musical confines for direction and inspiration. It says much during its run without the use of lyrics.

It comes accompanied by a cover of the 1975 Fleetwood Mac single “Landslide,” made iconic through the heartfelt vocal performance of Stevie Nicks. A song that remains recognizable for its melody and folkish lyric in DAXMA’s hands, but is given a new breadth of instrumental arrangement and depth as the band makes it their own. Below you’ll find a video track teaser for “Landslide.”

It’s an odd pairing on paper, admittedly, but DAXMA leaves little doubt that it is part of their intention. Just as “Minima Moralia” seems to be a space of intellectual engagement, “Landslide” becomes an emotional contemplation, with a deeply personal origin on the part of the band itself.

‘Ruins Upon Ruins‘ will be released for digital download and streaming, as well as the physical format in a limited edition 12″ vinyl pressing on July 26th through Blues Funeral Recordings [Pre-order now].

Recently hand-selected as part of the inaugural year of the exclusive PostWax subscription series from Blues Funeral Recordings, DAXMA is currently working on its next full-length release. In the meantime, and in addition to the video teaser, we have a full stream of their last album ‘The Head Which Becomes the Skull‘ via Bandcamp.