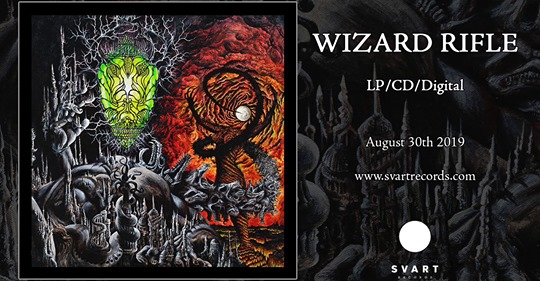 It is one decade into the existence of the unique, genre-warping duo WIZARD RIFLE, ten years since their emergence from the Pacific Northwest (and, in part, Detroit) back in 2009.

Established in Portland, Oregon, the pair of performers that power this project, guitarist and vocalist Max Dameron, with drummer and vocalist Sam Ford, is preparing to release a new album. Their third full-length recording is a self-titled album, the follow-up to 2014’s ‘Here In The Deadlight’ and 2012’s ‘Speak Loud Say Nothing’, and set to arrive August 30th from Svart Records.

Anticipation for this offering has faced gradual, steady growth within the ranks of those that appreciate melds of psych-imbued sludge, noise rock, and stoner thrash metal. Accented by vocal harmonies and punk rock style shouts, all the adverbial descriptors in the farthest-reaching lexicons will fall short in providing a proper picture of what we may expect. All of which is accomplished at the talented hands and minds of just two musicians, mind you. They did have some help though, as density guru Billy Anderson mixed the eponymous new album.

We have a track to share with you at this time, “Rocket To Hell“. The number is a whipping, winding song laden with serpentine coils of double sung/ screamed vocals and frenzied musicality. The band recently confided the following to Decibel magazine about this particular song saying:

Listen to “Rocket To Hell” here, while checking out the album artwork and tracklist. ‘Wizard Rifle‘ will be available in digital, vinyl, and CD formats from Svart Records on August 30th. Pre-order will be made available soon.

From there, WIZARD RIFLE will join WARISH as both provide support to the upcoming ACID KING “Busse Woods 20th Anniversary U.S. Tour” (news article). Find the full itinerary below.