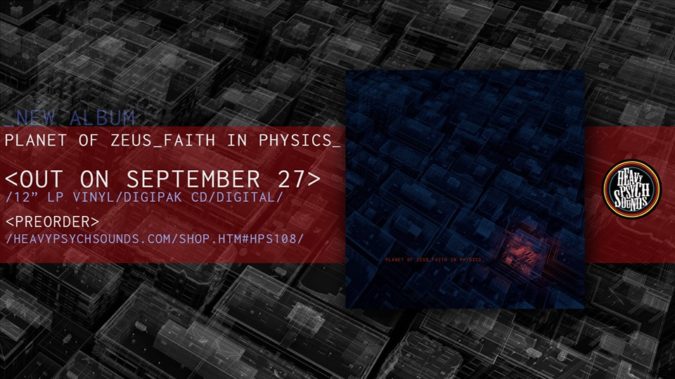 It was recently announced that Greek heavy rockers PLANET OF ZEUS have inked a worldwide distribution deal with fuzz-worshiping Heavy Psych Sounds Records for the release of a new album.

Set to arrive September 27th, ‘Faith In Physics‘ is the fifth studio album from the band that will celebrate its 20th anniversary in 2020. Two decades is a respectably lengthy run for any band, of course, and early indications hint at the notion that PLANET OF ZEUS has carried out a total revamping of themselves. This suspicion is immediately verified upon hearing the first single “Revolution Cookbook” from the upcoming effort, by means of the official video presented here.

The song is a reeling, uptempo transference of solid rocking laced with chunky grooves, all accented by passages of furiously energized intensity. Even the subject matter and lyrical contents of the band’s latest batch of tracks is of a much more socio-politically oriented nature. Themes run a gamut of far-reaching matters, from religion to social media networking, pseudo-revolution, addiction, and the loner mentality.

This latest leap in the musical evolution of PLANET OF ZEUS is a continuing metamorphosis that began with the band’s fourth album, 2016’s ‘Loyal To The Pack‘. With that album’s deeply esoteric demeanor, thought-provoking lyrics, and stringently melodic songwriting, it shocked fans at first – before becoming the band’s best-selling release yet. It is expected that PLANET OF ZEUS would like to repeat, even more likely surpass, that success with ‘Faith In Physics‘.

The band shared the following about the new album, and their new label home, saying:

“We are really happy to announce, that we’ll be releasing our 5th studio album through Heavy Psych Sounds. In a world where music sounds more and more distant every day, it’s really important for us to be part of a like-minded community of people and bands, that are sweating and struggling to make rock ‘n roll music relevant, raw and dangerous again.”

‘Faith In Physics‘ was produced by the band and recorded in the Fall of 2018 at Villa Guiseppe Studio (drums), PLANET OF ZEUS‘ studio (guitars and bass), and Kiwi Studio (vocals) in Athens, Greece. It was recorded, mixed, and mastered by Nikos Lavdas, while featuring artwork created by Aristotle Roufanis Studio.

See PLANET OF ZEUS perform live at these upcoming events: