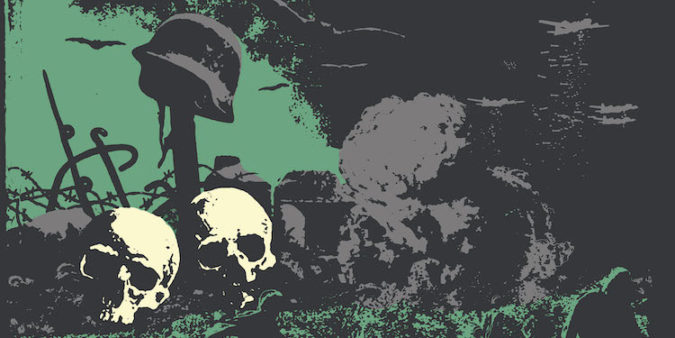 Titled ‘Coven Of The Ultra-Riff‘, the match-up finds each band contributing one side to the split with two tracks from each, one original and a re-imagined cover song of the other’s work. The cover songs have been stylistically reversed, with DEVIL’S WITCHES providing an acoustic version of “Ghostsmoker“, and SAINT KARLOFF electrifying the originally acoustic “Supervixen“.

With today’s look at the album artwork, track-list, and other details, we reveal the lyric video for the SAINT KARLOFF song “At The Mountains Of Loudness“. It is the first new music from the trio that seared their way on to the international heavy music scene with the release of their 2018 debut album, ‘All Heed The Black God’.

Clocking in at a tad over 11-minutes in length, “At The Mountains Of Loudness” is an ambitiously epic track that validates the success of SAINT KARLOFF‘s début as no fluke. Featuring Mads Melvold on guitar and vocals, Ole Sletner on bass, and Adam Suleiman on drums, the scope of today’s single is a remarkable credit to the trio. From the roll-out of fast-moving, blues-tinged vintage rock that welcomes one into the song, to eventual doom undercurrents and solid proto-metal passages, there is much to absorb.

“We are thrilled to be a part of the Majestic Mountain family. Marco has been one of our greatest supporters ever since we put out our first album, and we’re looking forward to achieving great things together. It’s an honor being their first release alongside the mighty Devil’s Witches, who we are all great fans of.”

Witchdoctor General of DEVIL’S WITCHES contributed to the conversation by adding:

“We’re honored to be the first release of the new independent record label Majestic Mountain Records. The creative freedom that they allow is exactly the kind of company Devil’s Witches embraces. This isn’t just a majestic mountain, nay, it is indeed THE MOUNTAIN OF THE DEVIL’S WITCH!“

The split comes in transparent green and black marbled, 180 gram, 12″ vinyl housed in a single sleeve cover, including a double-sided insert – one side for each band. The cover artwork was created by Brouemaster Visual Decay, with design and insert artwork by DEVIL’S WITCHES. The split also includes two A3 posters: One designed by Devil’s Witches and the other designed by Shane Horror; plus Split and Label stickers.

“At The Mountains Of Loudness”
“Supervixen (Electric Return)“

“Love Is Doom, A Fistful Of Napalm”
“Ghostsmoker (Acoustic Return)“

Releasing September 6th, you can pre-order the vinyl split ‘Coven Of The Ultra-Riff‘ from Majestic Mountain Records at this LINK. A Cassette version will also be made available from Stoner Witch Records; pre-order HERE.

UPDATE: DEVIL’S WITCHES issue an official visualizer for their original song contribution to the split, “Love Is Doom, A Fistful Of Napalm“. Included below, the song yields a heavily vintage aesthetic in both sound styling and accompanying imagery… get burnt with its amorous elixir now.