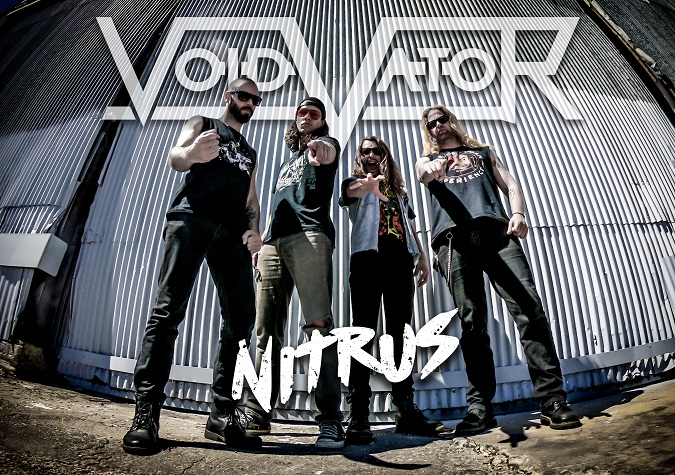 Formed in December of 2014, VOID VATOR is a hard rock and heavy metal band based out of Los Angeles, CA. We’ve shared some of their news over the years and today we have a fantastic update on these four ass-kickers.

VOID VATOR took form when founding members Lucas Kanopa (guitar and vocals) and ex-Gypsyhawk guitarist Erik Kluiber joined forces with Lucas’s childhood friend German Moura on drums, and Sam Harman on bass. After releasing their debut EP, ‘Dehumanized‘ in July of 2017 [review here], the band was ready to hit the pavement… and that they did. Hitting the road hard and often, by the end of 2018, they had firmly built their live approach as hard-hitting, rock and roll riffage rather than the stoned vibes of many of their peers. VOID VATOR quickly became known as a take-no-prisoners live act.

In 2019, VOID VATOR self-released a second EP entitled ‘Stranded’ and took to the highways yet again – this time coast to coast. Leaving vapor trails of tinnitus from state to state, in addition to the live crowds, they also made an impression on a certain Northern California label. Today, Ripple Music is officially announcing the signing of VOID VATOR for a soon-to-be titled full-length release.

To celebrate the new partnership, the band is releasing a brand new stand-alone single, “Nitrus” – a cover in respect to one of their influences, surf rock legend Dick Dale. From VOID VATOR guitarist and vocalist Lucas Kanopa on the new single:

“We wanted to record Nitrus because we feel like Dick Dale never got enough credit for planting the seed for other genres of music like thrash metal and punk. So we wanted to prove this by doing a harder rendition of the track Nitrus from the 1996 album Calling Up Spirits. We’d been playing this song live for about a year before Dick Dale’s passing, so when he passed away we figured that recording it would be a great tribute to his legacy.”

Have a listen to the premiere of “Nitrus“:

From Ripple Music’s Todd Severin on the new signing:

“Really excited to welcome Void Vator to the Ripple family. Along with bands like Haunt, they represent the best of the New Wave of Traditional American Heavy Metal that is tearing through the underground right now. Stoked to partner with them and can’t wait to unleash more of their mad metal upon the world!”

The new single “Nitrus” will be available as a NYP (Name Your Price) download at Bandcamp on Friday, July 20th. It will also be available on all major streaming outlets. Check Ripple Music [link] Bandcamp page or Void Vator Bandcamp [link].

Until Friday, you can hear VOID VATOR‘s new single streaming above, as well as their most recent EP ‘Stranded’ below via Bandcamp and check out their upcoming August tour dates in support of Slough Feg and Sanhedrin: