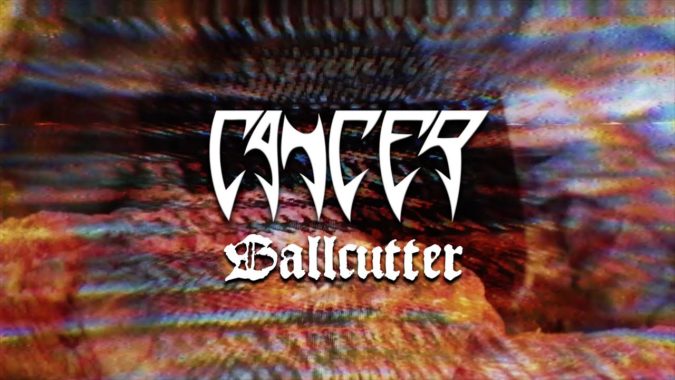 For over three decades, U.K. death metal masters CANCER has stricken our planet with some of the most abrasive extreme metal known to man.

With roots stretching back to 1987, CANCER set themselves apart from the endless flood of generic death metal bands by forging their own unique sound. Though the band did encounter occasional periods of inactivity, their latest stint of reinvigorated decimation began in 2013. Since then, they have resumed their efforts in creating inhuman music, like that on their critically acclaimed 2018 comeback album, the Peaceville Records issued ‘Shadow Gripped‘.

The band’s backstory was detailed in an August 2018 segment of the Oldschool Sunday column at Riff Relevant. Today, we have news of an imminent release. Yes, the British death metallers in CANCER will release a new, limited edition, five-song EP, ‘Ballcutter‘, via Peaceville Records on July 19th.

Available exclusively on acid yellow vinyl, the EP leads with an alternate master version of the ‘Shadow Gripped‘ album track “Ballcutter“, featuring a guest appearance from Anders Nyström (Bloodbath, Katatonia). Filling out the remainder of Side A are two unreleased songs in the shape of “All The Curses” and “Crocodile Itch“. These tracks were recorded at Foel Studios, with Simon Efemey (Paradise Lost, Napalm Death, Amorphis) handling the production and mixing duties.

Side B contains exclusive, raw demo versions of “Garrotte” and “Organ Snatcher“, a pair of songs that were included on the ‘Shadow Gripped‘ album in their fully produced state. The versions on this EP date to a period shortly after the band’s reformation, a point when CANCER was in the act of creating their now-triumphant studio-based return.

CANCER‘s current lineup includes all three original core members of the band with John Walker (guitar and vocals), Ian Buchanan (bass), and Carl Stokes (drums). We present the ‘Ballcutter‘ EP album artwork and details at this time, along with a lyric video for the title track. It will arrive July 19th from Peaceville Records and is available to pre-order.

In closing, CANCER has just announced they will headline the Wasteland Stage at this year’s esteemed Wacken Open Air festival on August 1st. Find further details, news updates, and other information for W.O.A. 2019.