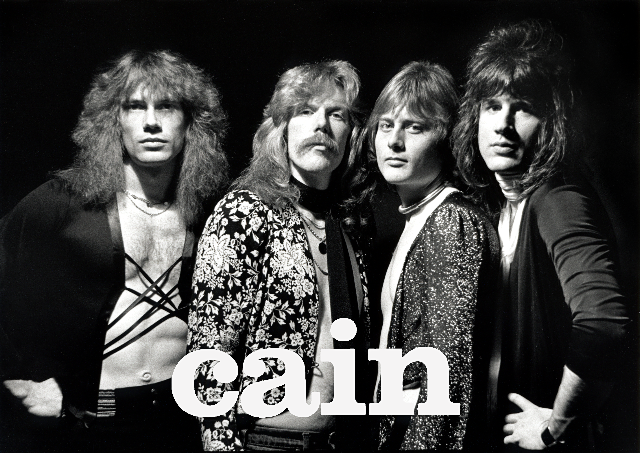 Let’s be honest, musicians during the earliest days of rock and roll selected some very mediocre, or lame, or just terrible names.

The Beatles, The Doors, The this, or The that… and in the Twin Cities of Minneapolis and Saint Paul, Minnesota circa 1967-ish, there were the bands The Grasshoppers and The Bananas. It was 1968, when The Grasshoppers ended a five-year run and threw in the towel, as singer Jiggs Lee was seeking a college draft deferment to avoid being shipped to Vietnam.

The following year, The Bananas were making some personnel changes, ones that brought Jiggs Lee into the band as their vocalist and Mike Mlazgar (ex-Crow) on drums. Rounded out with bassist Dave Elmeer, guitarist Lloyd Forsberg, and keyboardist Al Dworsky, The Bananas continued to fulfill existing recording contracts and already-scheduled shows, while determined to make changes. One of their biggest changes, of course, was the adoption of a new name. One day, half-jokingly, Lloyd suggested “Cain”. No one had any objections and so, just like that, the quintet morphed into the band named CAIN.

Being around half a century ago, fifty years give or take, bands did things quite differently without the shortcuts and mass exposure of the current age. Back then, bands had to get out and play live, where they hoped to be “discovered” as they learned the ropes. CAIN had been doing this for a couple of years as they developed strong local support for their heavier take on hard rock and proto-metal music. During this period in the trenches, Mike Mlazgar would be replaced by Tom Osfar just as the band was establishing a foothold in larger markets like Chicago.

Eventually, Al Dworsky would depart CAIN as well, leading to a string of short-term keyboardists, who included Fane Opperman and then Jerry McGee. The role changed hands once again, this time filled by Chas Carlson, while CAIN was becoming a regular act on the Midwestern U.S. club circuit, playing alongside other unknown bands at the time, like Kansas, Cheap Trick, and Styx.

Tom Osfar was the next to leave CAIN, replaced by Kevin DeRemer, as the band was scouted by several record labels, eventually signing with ASI Records (Audiotek Systems Inc.). Their first album, ‘A Pound Of Flesh‘ (a reference from Shakespeare’s “The Merchant Of Venice”), was released in 1975, originally intended to have a very ethereal theme permeating its music. To this day, the album’s cover artwork has been the source of speculation and confusion despite having a simple reason for being  – it was the idea of the ASI Records’ marketing department run amok. A soup can full of what appears to be entrails and other fleshy chunks piled around it… yes, I am sure The Bard would approve.

‘A Pound Of Flesh‘ was followed by a second album ‘Stinger‘ in 1977, as CAIN continued to grow in popularity. Everyone seemed to expect CAIN would soon sign with a major record label, but then half the members abruptly split in 1978, and the band quickly fell apart. It was truly a profound loss of an amazingly talented, highly creative band to be sure.

At the time of their dissolution, CAIN had begun recording material for a third album. Talk over time had established that this music was the band’s most ambitious, diversified, and wide-ranged music. It was created with a much bigger picture in mind, a plan to provide their very best artistry in the hope it would help launch the band into a better situation with a new label. Unfortunately, this didn’t happen, but Monster Records (now Rockadrome) stepped up and reissued ‘A Pound Of Flesh‘ in 2003, with those unreleased songs as bonuses, helping CAIN to be discovered by a new generation of ’70s rock fans.

Unlike so many other acts from that period of time, the legend of CAIN has only grown, as they achieved revered cult status with those that appreciate the band. Long out of print for many years, copies of each of those original studio albums have been known to fetch hundreds of dollars on the reseller/retail market.

No less of a rock authority than Mr. Martin Popoff has excessively praised CAIN, saying in his  ‘The Collector’s Guide To Heavy Metal – Volume 1: The Seventies’ book:

“Cain deserve to be ranked right up there with Truth And Janey as one of the most capable, ready-for-prime-time bands, toiling away, shining metal in hand, throughout America’s underground.”

He goes on to call A Pound Of Flesh “a classy piece of work…innovatively arranged… [with] a tight, immediate drum sound and tone-rich guitars.”

CAIN was inducted into the Mid-America Music Hall Of Fame on September 17th, 2010, and performed a short live set at the ceremony. This was the first time these musicians had re-assembled as CAIN in nearly 20 years and their reformation was well received, leading them to continue playing occasional gigs around their region. The second album ‘Stinger‘ was remastered and reissued by Rockadrome in 2013, with several then-unreleased live songs added as bonus tracks.