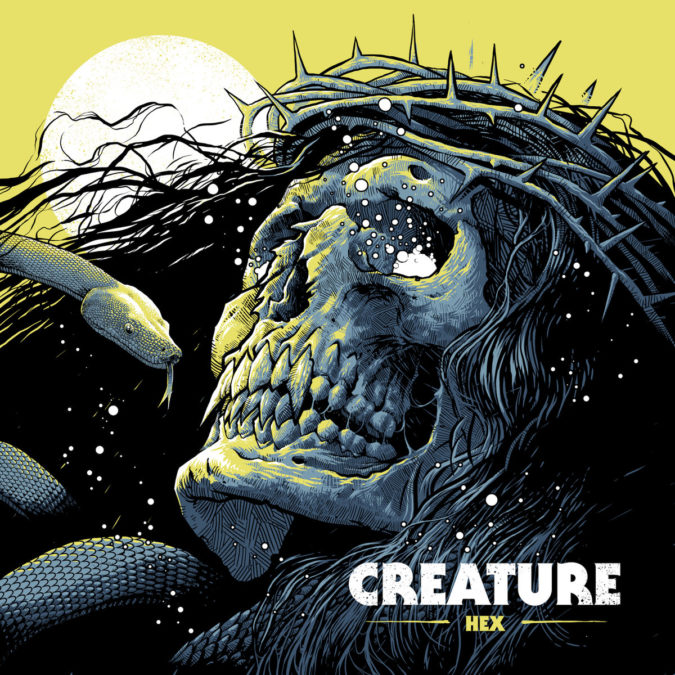 Seven minutes and forty-two seconds. Evidently, this is all the time that is needed to become an ardent enjoyer of the Birmingham, U.K.-based band CREATURE.

Skeptical? You need not be, for all you need to do to put this claim to the test is subject yourself to the introductory EP from CREATURE, the Grey Ghost Records issued ‘Hex‘. Set loose back in early May, the four-song short player is a rapidly fired dynamo of caustic post-hardcore and crust punk aggression with tints of mathcore. Frenetic and relentless, the total running time for this quartet of tunes is… yep, you guessed it, a total of 7:42.

With a pair of its tracks clocking in either barely over, or under, the minute-and-a-half mark, ala “Witch’s Grip” (1:44) and “Blackness” (1:22), one may miss something if not careful. The first of them serves as the opening onslaught of the EP, as “Witch’s Grip” (video) immediately goes for the throat after a brief guitar start. Building momentum within a barrage of riffs and piston-like drums, the hyper-energized song serves as host to some rather rabid vocals as well.

Those vocals, along with the guitar, are provided by James Thompson, joined by bassist and backing vocalist Dan Willett, and drummer and backing vocalist Tom Bradshaw in CREATURE. It really is the ideal name for this trio, this brutish abomination brought to life like some Frankenstein’s Monster. Animated with electrifying manipulations, like those found in “Liquid Gold” (video below), after the proper parts had been procured and maniacally stitched together.

The three-headed beast liberates itself in the slightly spiraling segment that announces “Crestfallen“, its fleet-footed flight gaining ground. The song gallops forward on tightly-wound drums, ones landing seemingly inhuman strikes at times due to their overall speed. Riding upon them are flurries of buzzing guitar riveted into place with the anfractuosity generated by the bass and topped with schizophrenic vocals.

The previously mentioned “Blackness” brings things to an end, but not before the crazed qualities of this composition attack your sanity. With a chunky guitar grinding out its riffs and the rhythm section’s bouncing parts off one another, hostility-honed vocals rage away. The aptly titled song does as intended, battering one’s skull to such senselessness that unconsciousness seems certain any second.

If you appreciate your metal recklessly wide-open, CREATURE is a Britannic beast that will utterly bewitch with their ‘Hex‘ EP… and they will do it in under eight minutes. Discover what pleasures of distorted flesh await by streaming the recording here in this review or mob your way over to Bandcamp for streaming and purchase options HERE.