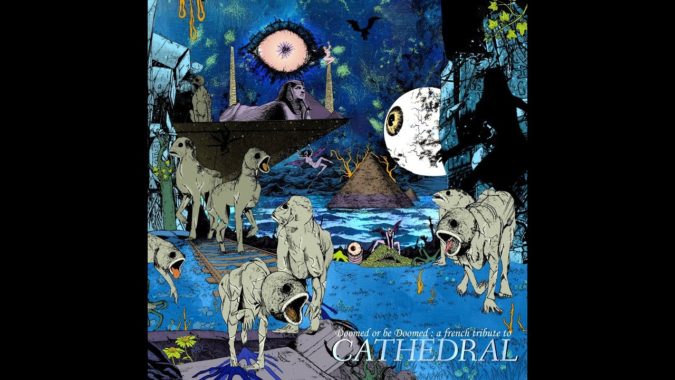 It would seem that France is quite enamored with the collective works of their neighbor England’s entity of excessive somber heaviness, Cathedral.

This enchanted fascination with the aurally bludgeoning Britannic band was recently the source of inspiration for two impassioned Frenchmen, Laurent Lignon and Stéphane Le Saux. These two staples of the subterranean Doom music scene in France led the crusade to recruit bands from their homeland for inclusion on a very special project of personal interest.

August 13th will see the arrival of the 2-CD compilation, ‘Doomed Or Be Doomed: A French Tribute To Cathedral‘ from Sleeping Church Records. The collection contains track contributions from twelve France-based bands either paying homage to Cathedral by faithfully covering a song of theirs, or outright reinterpreting such a composition. Bands appearing on the album are PILLARS, GOAT RIVER, LUX INCERTA, MISANTHROPE, PRESUMPTION, ATARAXIE, BARABBAS, MONOLITHE, CONVICTION, NORTHWINDS, FATHER MERRIN, and DIONYSIAQUE.

The group’s 1991 album début for Earache Records, ‘The Forest Of Equilibrium‘, is considered a landmark opus for its slow, slothful deluge of heavy doom music. Embellished with elements of folk-rock and psychedelia, this vehicle for Dorrian’s tortured, loathing vocals would only be the beginning for the band. The album generated interest in them from the major record label Columbia Records, where Cathedral signed for the release of their experimental sophomore album, 1993’s ‘The Ethereal Mirror‘.

The album was a success with fans worldwide for its incorporating upbeat tempos and groove-laden guitar riffs, along with cleaner vocals as well. These additions to the musical formula concocted by Cathedral would be routinely expounded upon in subsequent records ‘The Carnival Bizarre‘ (1995), ‘Supernatural Birth Machine‘ (1996), and ‘Caravan Beyond Redemption‘ (1998), before their return to pummeling density on 2001’s ‘Endtyme‘. The band continued to explore myriad stylistic influences ranging from classic 70’s rock, to progressive rock, sludge, and more intense psychedelic nuances over the span of four more studio albums (2002’s ‘The VIIth Coming‘, 2005’s ‘The Garden Of Unearthly Delights‘, 2010 double album ‘The Guessing Game‘, 2013’s ‘The Last Spire‘) before their break up in 2013.

It would be remiss not to mention that the artwork that graces many of the Cathedral albums is an essential component of those recordings. The greatest number of those tormented, psychedelically mind-opening images were created by artist Dave Patchett and are integral to the individual release each adorns.

The entire body of work left by Cathedral is an immaculate offering to music fans, an inspiring legacy as evidenced by today’s news. ‘Doomed Or Be Doomed: A French Tribute To Cathedral‘ – featuring artwork by Kax Nivore – is a most ambitious homage to the iconic band and is mastered by Frederic Patte-Brasseur. View the album cover imagery and the tracklist here, and hear the first single to be shared, “Reaching Happiness, Touching Pain“, from ATARAXIE.