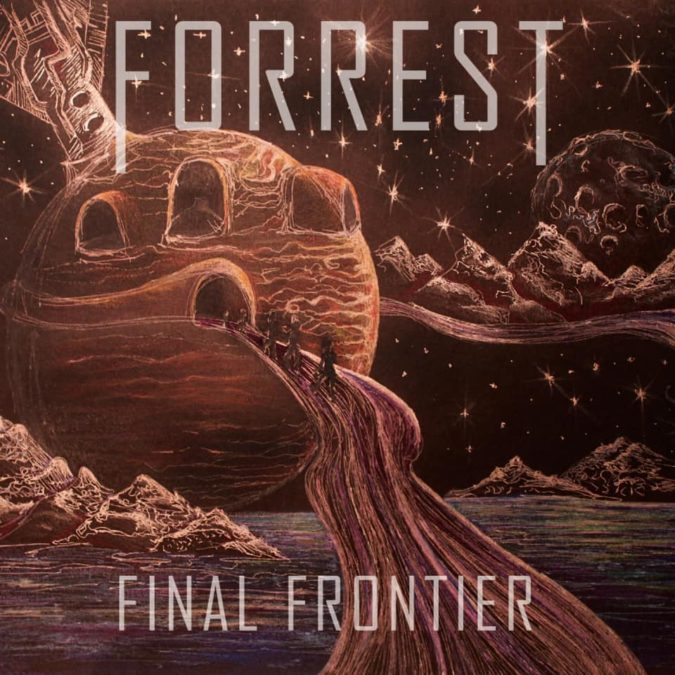 I have previously mentioned that I cull a smidgen more excitement than usual when the subjects of any review hail from my home State of Kentucky.

The Bluegrass State has been somewhat starved, more or less, for original artists over the years. That’s not to say we don’t have any, they are just a bit fewer and further between. That reality lends itself to a realization that when we do discover a worthwhile act here in our state, we had best do what we can to support their determination to keep at it.

Today’s subjects, the band FORREST from Lexington, KY, have been at it since 2017, and just recently released their second EP offering, ‘Final Frontier‘. It arrives a little over a year to the day that the guys shared their initial outing, the ‘Kickball With Russians‘ EP, back in early July of 2018. In the time between the two, it would seem the quartet of players – Riley Logan (lead guitar), Josh Summerville (drums), Charlie Overman (rhythm guitar), and Jared McIntyre (bass) – have honed things to a sharper precision in their music.

You will notice FORREST has no vocalist, and why would they? They are an instrumental entity that effectively blurs any dividing lines between post-rock, sludge, doom, and progressive metal. For good measure, they toss in an abundance of quality jamming and periodically flavor things with the use of synthesizers. This recipe yields solid, ambitious compositions that never seem to cover the same ground twice.

The lead-in song “Bubba” is an immediate example of this, hitting marks all over the place. The song’s stonerfied start is followed by chugging, semi-thrash metal, and then abruptly morphs into a haze of melodic psychedelia. This is exactly what FORREST excels at, taking listeners on a ride of rapidly alternating aural textures and fluid-like intensities.

The band never rests in one spot for long, cycling through dynamically juxtaposed discharges in tracks like “To Lose A Whale“, “The Intensity Of Frenchness“, and “Specialman“. I feel I should warn you the latter song, “Specialman“, has nuances that will quickly hook themselves into your head and might possibly drive you mad. They arrive in moments of infectiously upbeat, jazz-infused slights but before the song’s end, they take on a heavier, menacing quality.

Two selections really stand out here, setting themselves apart by possessing an altogether different feel to them. The first is the seeming title track, “The Final Frontier (Dan II)” that finds FORREST in its most metallic state. Most of the song is spent hammering out tight-knit, aggressive interactions that become more and more ominous as the song plays out.

Yes, FORREST does exceedingly well in their representing Kentucky with their new EP recording, ‘Final Frontier‘. It reveals that not only is this a promising, talented bunch with stellar songwriting skills, but – shocker – I’m pretty sure that age-wise they are all still in their teens. If they have these types of abilities already developed, just imagine the caliber of musicians they would become over time.

Stream the ‘Final Frontier‘ EP from FORREST in this review or go to Bandcamp for further streaming and purchase options HERE.