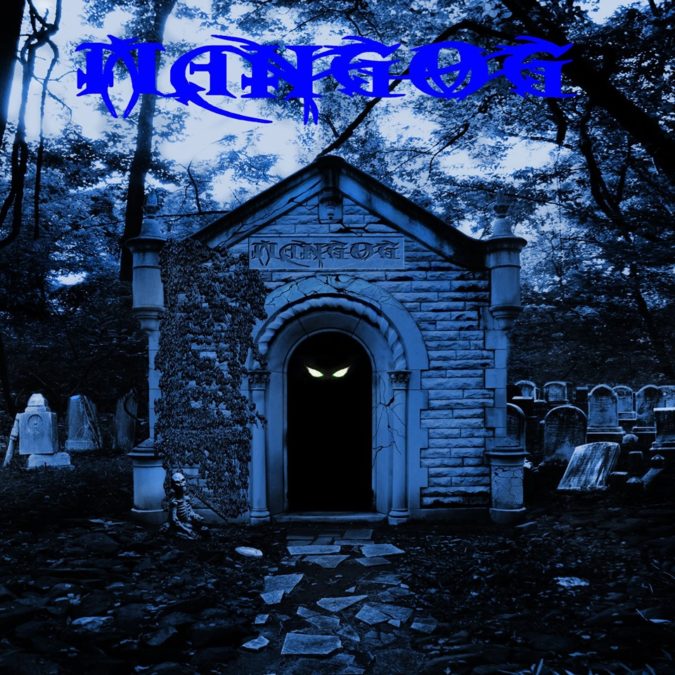 It has been slightly over one month since traditional doom-oriented quartet MANGOG issued the new two-song EP, ‘The Ghost In The Room‘, via Argonauta Records.

Much like the wraith-like entity referred to within the title, the EP seems like some incorporeal effort that many have missed sighting… let alone hearing. That is their loss, as I am here to reveal this short player may be the best thing the band has given to music fans yet. I stand behind this statement, being fully aware of and well acquainted with, MANGOG‘s 2017 full-length outing ‘Awakens‘, as well as 2015’s ‘Daydreams Within Nightmares‘ EP.

Truth is, MANGOG has no need to prove anything to anyone, for when your band’s roster of players lay claim to past or present positions in Beelzefuzz, Revelation, Final Answer, Against Nature, Major Company, and other notables, this fact speaks for itself. However, when a band reveals their base of operations in Maryland, anywhere in Maryland, and they play doom, well then they had best be ready to be put to the test at some point. That said, I don’t imagine guitarist/vocalist Bert Hall, vocalist Myke Wells, bassist Darby Cox, and drummer Dao Yu (replaced by Russell Hayward III since the EP’s recording), are at all rattled by this type of challenge.

If we gauge the music of ‘The Ghost In The Room‘ EP as any type of reaction, then there is no question that MANGOG more than hold their own on this latest studio-borne statement. Speaking of studios… well, more like those that work wizardry within them, this EP was mixed and mastered by none other than Drew Mazurek (Souls At Zero, ZAO, Mystic Force).

From the very beginning of the lead-in title track ”The Ghost In The Room“, the essence of Iommi permeates each advancing second. It then takes the track by the throat with beyond-dismal riffing around the 00:25 second mark, each note resonating in your bones for what seems an eternity. Braced by minimal bass lines and drumming, things are soon dragging along a sludgy path that winds its way like a funeral procession. The emotive crooning in the song comes as an odd twist in things with Hall providing lead vocals for this number though Wells is involved in a backup capacity. Lyrically, existentially oblational subject matter yields a thought-provoking, verbalized theme contained throughout the song.

Wells contributes rather soulful vocals near the four-minute mark, thus creating a point where musically everything briefly gains momentum. Eventually subsiding and tapering down, a reprise of the repeating, semi-hypnotic dirge of dooming audio that initially started things, returns. I especially like the trade-off vocals between Myke and Bert administered a bit prior to the song’s end.

What comes next is an unexpected surprise of a song, one that finds the MANGOG foursome foregoing any doom styling. No, instead “Hubris” is an upbeat blues number chock full of a punk rock attitude and intriguing lyrics, ones where the chorus’ words “I’m all outta fucks to give” will echo in your skull for hours afterward. Their stripped-down delivery takes on an almost hymnal state near the song’s ceasing, and it is a right nice touch, too. During repeated listenings, while I penned this piece, I could not shake recollections of how much I liked 24-7 Spyz and Living Color in my younger days… memories spurred by this song’s overall sound and style.

MANGOG make quite the mark with their newest release, the two songs of ‘The Ghost In The Room‘ EP seeming like opposite sides of the same coin. One side is a dense, slowly heaving behemoth of momentous portents, pivotal in keeping up appearances when one is connected to Maryland. On the other side, a complete change of character where the band intakes adrenaline and throws all care and caution to the wind. The dichotomy of this pair of tracks, “The Ghost In The Room” and “Hubris“, is a most powerful presentation and here’s to hoping there is much more to come from MANGOG.

Stream the EP in this review or head over to Bandcamp or Argonauta Records for further streaming or purchase options.

See MANGOG perform live at an important pair of upcoming benefit shows for some good friends of the Maryland music scene: