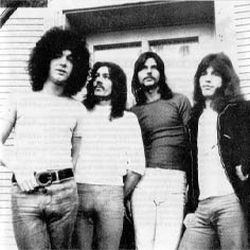 Long before the album of the same name came from Opeth in 2001, there was the heavily blues flavored progressive rock band from Berlin named BLACKWATER PARK.

The band’s name was taken from that of a gothic mansion setting in 18th-century novelist and playwright William Wilkie Collins’ first published novel, “The Woman In White” (1859). Though the band was based in Germany, only three of its four members – guitarist Michael Fechner, bassist Andreas Scholz, and drummer Norbert Kagelmann – were German. The man fronting the act, guitarist and vocalist Richard Routledge, was English; not an uncommon formula in that period as bands Lucifer’s Friend and Epitaph featured nearly the same German to Englishman ratios.

Unfortunately, not a lot is known about the earliest origins of BLACKWATER PARK, though here is what we do know: the band emerged from the Berlin underground music scene at the very start of the Seventies, and in 1972, their sole studio output arrived, the Second Battle Records issued ‘Dirt Box‘. It consists of seven songs, six of them originals and one a cover of The Beatles’ “For No One“.

Though the music of ‘Dirt Box‘ may not possess enough of an experimental edge to be deemed proper ‘Krautrock’, it does fit nicely into several genre categories. Very guitar-driven and richly blues-tinted, with plenty of organ, groove, and grit, filing this one under Hard Rock, Progressive Rock, or even Proto-Metal, are all valid. For broad comparison purposes, think Trapeze, Free, or Armageddon – though ultimately, ‘Dirt Box‘  failed to advance the band’s career beyond its preliminary stages.

The album was re-released in 1990, nearly two decades after BLACKWATER PARK disbanded, with very little fanfare, sometime shortly after their singular album had arrived. During the years, they have become a cult-revered group and it is now commonly believed that Mikael Åkerfeldt was inspired to name Opeth’s fifth studio album, 2001’s ‘Blackwater Park‘, after the band.