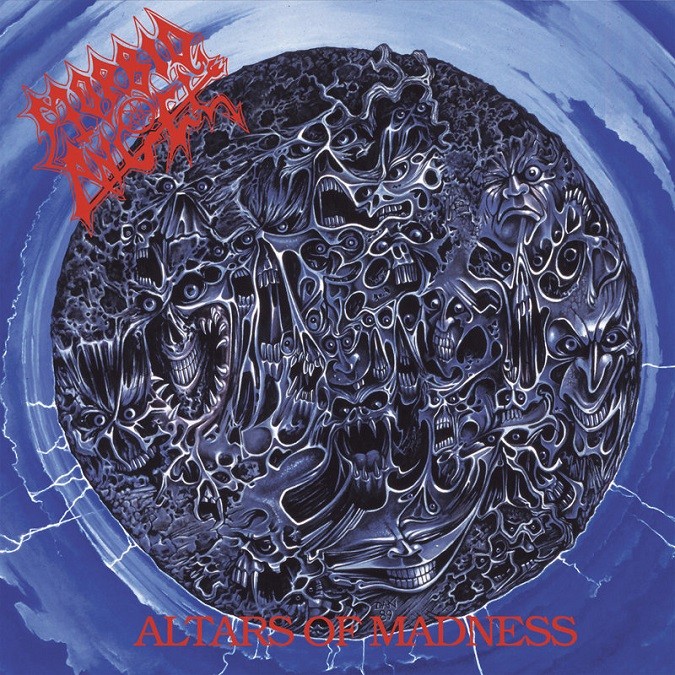 It may make for splashy headlines, but art that depends on shock value rarely has any lasting relevance; the goalposts of what is considered taboo or too outlandish constantly being moved by relativity and the passage of time.

I mean, who’s to say what is going too far in as wacky a culture like the one we find ourselves currently inhabiting? I only bring it up because Florida‘s MORBID ANGEL album ‘Altars of Madness‘ is now 30 years old, but it is still one of the landmark recordings in death metal history. It has lost none of its dark allure or ability to impress with its superb songwriting and devastating musicianship. Much of its timeless qualities stem from the fact that the guys in MORBID ANGEL were dead serious about their music, notoriety the last of their concerns-complete destruction their only mission.

Armed with the otherworldly incantations of the Necronomicon and a love for the psychedelic, painterly visions that Eddie Van Halen’s playing invoked within him, guitarist and bandleader Trey Azagthoth recruited a group of like-minded musicians to help him realize his vision of creating a new style of music that was crushingly heavy, blindingly fast, and unnervingly evil and chaotic.

After a test run that yielded the unreleased (until 1991, anyway) ‘Abominations of Desolation‘, Azagthoth brought two new musicians into the fold – bassist and vocalist David Vincent and drummer Pete Sandoval, with guitarist Richard Brunelle making the cut from their earlier incarnation – after he vowed to mold his playing to complement Azagthoth’s deliciously malevolent style. This was the ground floor of death metal and total dedication was required to deliver this challenging new paradigm.

Drummer Pete Sandoval in particular had to up his game exponentially. Previously unacquainted with double bass drumming, he practiced incessantly in the months leading up to the recording of ‘Altars of Madness‘ in order to perform the hairpin turns, punishing blastbeats, and relentlessly demanding footwork necessary to push the band to the levels they were aspiring to.

The album begins with several seconds of a chaotic swirl of sounds that matches the sinister feel of Dan Seagrave‘s iconic cover art, a bubbling globe of demonic faces writhing in pain. When the song actually begins, it is with an implosion that drags us into a netherworld of savage riffs and wicked tempo changes that lasts throughout the entire album. “Immortal Rites” is the perfect introduction to MORBID ANGEL‘s brand of death metal – it took the evil feeling of Slayer and Mercyful Fate and somehow made it faster, dirtier, more brutal, and devilishly complex.

‘Altars of Madness‘ is in an elite group of songs that possess an almost endless cache of riffs that are both catchy and unique, each new song unloading a toolbox of confounding, horrifying torture devices. “Suffocation” barely lets up once for its entire three-minute runtime, the band’s intensity and focus mesmerizing in its almost inhuman, undeviating sense of purpose. “Visions from the Dark Side” continues the onslaught, the tremolo-picked riffs that arise at about the 20-second mark undeniably potent and influential on an entire generation of death metal guitarists.

The vicious “Maze of Torment” is a superb distillation of the dark powers being brought to bear on this album, the unholy synchronization of the instruments jaw-dropping in terms of both technique and stamina. David Vincent‘s gurgling vocals sound like they are coming from directly from the pits of Hell, meaning they fit the music perfectly. Azagthoth‘s guitar solo takes the satisfying insanity of Slayer‘s guitar excursions and ups the ante in every way, Trey eschewing traditional scale and chord relationships, instead opting for a set of geometrical fretboard divinations all his own.

The sheer virtuosity and viciousness that permeates the album make for a challenging first (and tenth) listen, but it’s ultimately the songwriting that carries the day. “Lords of All Fevers and Plagues” is dotted with perplexing, intoxicating flurries of lead guitar in between the perpetual lava flow of grinding, visceral riffing.

Another death metal classic, “Chapel of Ghouls”, flows with an uncanny sense of direction while still conveying almost reckless bloodthirstiness. The haunting feel that appears just before the two-minute mark threatens to make the hairs on the back of your neck stand at attention. Then another punctuation of speed-picking is dropped on us like the proverbial ton of bricks before the epic solo over that slower, eerie backdrop descends upon us. This was Azagthoth inventing a new brand of guitar playing before our eyes and ears, the atonal nature of his guitar runs balanced by their own internal, infernal logic and brain-searing memorability.

“Bleed For the Devil” and the lightning-fast “Damnation” have enough ideas for most bands to populate an entire album with, but MORBID ANGEL fearlessly let the fuse burn, welcoming the imminent explosion and conflagration. The wicked blastbeats of Sandoval make “Blasphemy” worthy of its name. The tempo churns and bubbles up out of the pit, the band utilizing a “floating” feeling in one recurring theme here (at 1:28 and 2:55 marks) that would become a key element of their style. In later extrapolations of this idea, riffs employ impossibly fast guitar sequences that become practically a blur, forcing the listener’s mind to compartmentalize them into one block, making the riff sound slower than it really was – a musical sleight-of-hand that was intriguing and unique to death metal, and MORBID ANGEL was one of the originators of the technique.

“Evil Spells” ends the album with one last lesson in violence, the guitars always on the verge of being out of control while paradoxically tightly focused. Trey‘s whammy bar-drenched contortions massaging and complimenting the mastery displayed in the ensemble playing. This album threatens to swallow us whole at every turn, with us powerless to stop it.

For a genre as oversaturated as death metal has become, it’s astounding how well ‘Altars of Madness‘ has withstood the ravages of time. There is not a moment that sounds contrived or inauthentic, the band clear in its poisonous intent from the opening moments. All the pieces were already here, and MORBID ANGEL proceeded to take these components and build astonishing monuments of putrid sound over the next decade.

No band is an island, but MORBID ANGEL is certainly a one-of-a-kind proposition, even when surrounded by imitators and thieves. Despite the horde of copycats that followed, MORBID ANGEL retains its reputation as one of the pioneers in a still-evolving genre.

On any proposed Mount Rushmore of death metal innovators, MORBID ANGEL and ‘Altars of Madness‘ in particular have earned their place with their timeless presence and unshakable temerity. And if someone miraculously decided to build such a vacation spot, that’s one trip even a homebody like me would be willing to make.