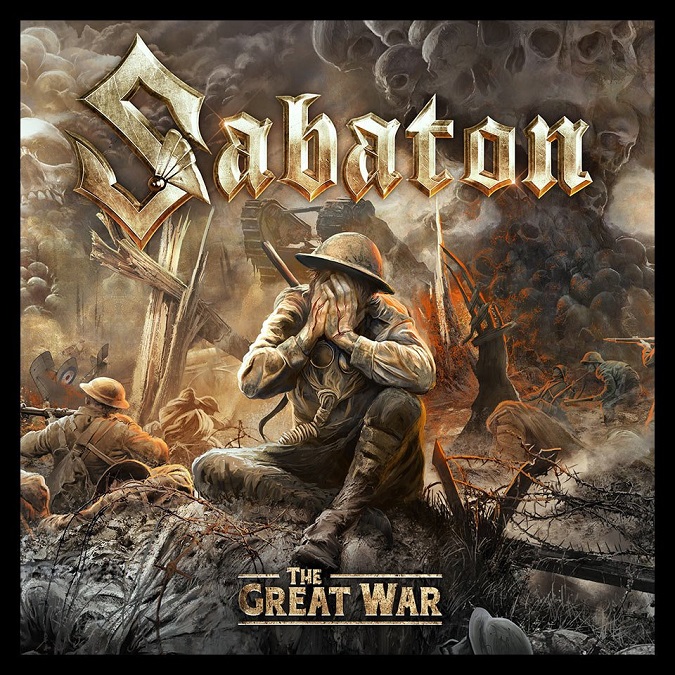 They have their own festival, Sabaton Open Air, held each August in their hometown of Falun. They host the always sold-out Sabaton Cruise each December.

And to tie in with their all-consuming interest in history, particularly military history, they now have the Sabaton History Channel on YouTube [link], featuring episodes that delve deeper into the events described in their songs. The channel’s been getting a workout lately with the release of their ninth album of conceptual tracks related to a specific theme of war, this time, ‘The Great War,’ encompassing the period of World War I (1914-1918).

Systematically and thoroughly researched, as all their work is, ‘The Great War‘ is at once educational, sobering, and loads of fun (if singing about war and death can be fun). Their music is so catchy and immediate, they have such a strong command of melody, that you don’t need to know the history or look up all the references – one doesn’t go hand in hand with the other in order to enjoy it thoroughly.

And they are masters of brevity, telling the story and getting out in rousing, gleeful anthems with sing-along choruses that stir your blood, whether you’re a peacenik or a hawk. They neither belabor points nor bog down with too many facts.

Singer/songwriter Joakim Broden, guitarists Tommy Johansson and Chris Rorland, bassist and songwriter Par Sundstrom, and drummer Hannes Van Dahl (also known as the husband of Nightwish singer Floor Jansen) begin, probably logically, with “The Future of Warfare,” which makes reference to the Battle of Flers-Courcelette, fought during the Battle of the Somme, which pitted British and French forces against the Germans.

The battle marked the first time tanks – a favorite SABATON stage prop – were used in warfare. It begins with the chorus spat out like machine-gun fire, urgent and brief and serves as a great introduction to what is to come. Punctuated by keyboards, it’s laced with historical references – “32 will lead the way,” referring to the 32 countries that fought in the war, and the commune of Villers-Bretonneux, where two tank forces battled for the first time in history.

“Seven Pillars of Wisdom,” named for the autobiography of British soldier T.E. Lawrence (i.e. “Lawrence of Arabia”), who served during the Arab Revolt against the Ottoman Empire from 1916 to 1918), is a succinct, detail-laden snippet of Lawrence’s life and the deeds that made him famous.

“82nd All the Way” (the 82nd Division was formed after the American entry into the war) does one of the band’s favorite things: immortalizes a hero. In this case, it’s Sgt. Alvin York, an American soldier who won the Medal of Honor for leading an attack on a German force in which at least 25 were killed and 132 captured. When he was initially drafted, York claimed he was a conscientious objector to the war because of his religious faith, but ultimately agreed to serve (“Into war he brought two things along / A rifle and his faith,” they thoughtfully note).

“The Attack of the Dead Men” remembers the battle that took place at the Osowiec Fortress in what is now Poland, then part of the Russian Empire. The song is named for the Russian soldiers who, thought to be dead after the Germans used chlorine gas against them, came back to fight anew. Again, it’s a perfectly edited historical moment, including the most biting, most vivid of details set to a crisp, marching rhythm.

“Devil Dogs,” the nickname at the time for a U.S. Marine, is a tribute to that branch of the service. “The Red Baron” remembers the famed Manfred von Richthofen, a fighter pilot in the German Air Force, known as one of the greatest pilots of the war with 80 air combat victories to his name. It’s notable for its use of keyboards, including a killer organ solo.

But ‘The Great War‘ is not all heroics – witness the title track. Beginning with a choir singing a doleful lament, Broden’s evocative raspy growl and rolling Rs tell a tale from the perspective of a lowly soldier who’s just living day by day, seeing his buddies die and trying not to get killed himself, and wondering if it’s worth it (“Where is this greatness I’ve been told / This is the lies that we’ve been sold / Is this a worthy sacrifice?”). It’s a standout that reminds, to borrow a cliche, that war is hell.

“A Ghost in the Trenches” is the story of Francis Pegahmagabow, a First Nations soldier who fought for Canada during nearly the entire war. He was a noted sniper, marksman, and scout, and the song makes respectful note of his heritage and how it shaped his skills and expertise in tracking and moving undetected (“Into battle, the gas has them pinned / Then this soldier invokes the spirits of the wind”).

The album’s first single, “Fields of Verdun,” memorializes the French city that was the site of the longest battle of the war. Over 11 months, some 400,000 Germans and a similar number of French troops died, and the song is a rapid-fire, breathless, uncompromising rant depicting the agonizing, endless period of fighting and dying.

“The End of the War to End All Wars” is that sobering reality check that the album needs. Heroics aside, WWI resulted in an awful loss of life – 16 million people died, almost 7 million of them civilians. And the world was irrevocably changed in its aftermath – “A new world will dawn from empires fallen,” they note.

The album ends with “In Flanders Fields,” the famous poem set to music by Broden. Sung by a choir and stirringly, starkly beautiful, it’s the perfect and logical ending to the story.