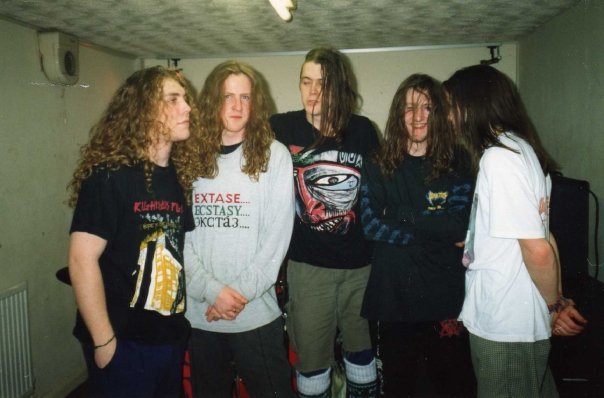 Time warping back to the Palm Desert, California region of the U.S. in the year 1991, where the band Sons Of Kyuss (previously known as Katzenjammer from 1987-1989) shortened their name to the matter-of-fact Kyuss.

Nearly simultaneously across the pond, in the Swansea, South Wales area of the United Kingdom, a quintet of musicians took the name ACRIMONY. These musicians – Dorian “Dexter” Walters (vocals), Stuart O’Hara (guitar), Matthew Lee “Roy“ Davies (guitar), David Jones (bass – R.I.P.), and Darren Ivey (drums) – were on a mission similar to their slightly more seasoned counterparts across the sea. These Welsh artists were trailblazing pioneers as well, and one day before all is said and done, they would be attributed with kick-starting the U.K.’s own Stoner/Desert Rock and Doom Metal movement.

However, before that could happen they must actually contribute something musical in nature to this cause, doing so by way of two demos: 1992’s three-song ‘A Somber Thought‘ and 1993’s four-song ‘Advance 7″ Tracks‘. The latter featured bassist Paul “Mead” Bidmead, who would appear on all future releases, including that year’s single for Shiver Records, ‘Solstice Sadness‘. The music of these recorded offerings is definitely more along the lines of death metal-nuanced doom, the type that is heavy and aggressive.

ACRIMONY signed with independent label Godhead Records for the release of their first full-length album in 1994, ‘Hymns To The Stone‘. Recorded at the same location as their previous efforts, Sonic One Studios in Carmarthenshire, West Wales, the album channels qualities that are much more metal-oriented. At the same time, there are also clearly defined elements of heavy rock becoming more prevalent, including cleaner vocals and fuzzier riffs. The record’s meld of psych, acid blues, and space rock with the band’s earlier metallic vibes yields music relative to American acts active at the time like Monster Magnet, Fu Manchu, and yes, Kyuss.

Still a work in progress so to speak, ACRIMONY tinkered with their overall sound as the process of their becoming more of a stoner rock style band would continue. A major mile marker in the revelation of this metamorphosis arrived with the band’s 1995 Godhead Records release, the four-song ‘The Acid Elephant‘ E.P. Bursting with inspiration and influence from the masters like Black Sabbath and Blue Cheer, this short player establishes a seemingly evolutionary level leap in the quality of the music being created by the band.

This was followed by a split release – featuring ACRIMONY and Iron Rainbow – from Game Two Records, although originally set for licensing through Rise Above Records. Before it could happen, the deal fell through, driving down production numbers to where only 1000 copies of the record (500 on red vinyl and 500 on black vinyl) were manufactured. The limited amount of the Acrimony/Iron Rainbow split had driven it in becoming a highly sought item with collectors over time.

Having successfully established themselves at that point, the band’s releases thus far had garnered them several record label’s attention. They would sign with Peaceville Records and in June 1996, they entered Square Centre Studios in Nottingham, England with producer Andy Sneap to record their sophomore full-length. What came of this union was the landmark recording ‘Tumuli Shroomaroom‘, released in 1996 (or 1997 via CD format). Yes, indeed… this was the culmination of the diverse musical terrains of the previous releases interwoven with acoustic passages and full-on space-rock jams.

Ultimately, ‘Tumuli Shroomaroom‘ would be massively well received and the source of much critical acclaim, including ACRIMONY being nominated for the Kerrang! Best Newcomer award at the time of the release. Their sophomore outing earned top review ratings from a multitude of sources, yet despite all of this the band never achieved mainstream success with the album (or any other for that matter).

By 2001, ACRIMONY was over and done, their final studio recordings used on a split with Church Of Misery, released from Game Two Records in 2003. Since then, members have gone on to participate in several other musical entities exploring various styles of metal music. Guitarist Stuart O’Hara went on to play in Iron Monkey, and later formed Dukes Of Nothing with other ex-Iron Monkey members and members of Orange Goblin. Stu, along with his former band’s other guitarist, Matthew Lee “Roy“ Davies, and vocalist Dorian Walters, formed Black Eye Riot together; while Paul “Mead“ Bidmead and drummer Darren Ivey formed Plan 9.

In 2008, Stuart, Paul, Darren, and Dorian re-grouped under the band name Sigiriya, where they released an album in 2011, ‘Return To Earth‘. Dorian left the band the following year. but it continued on with another vocalist, while Lee “Roy” Davies has been with southern style thrash metal band Lifer since 2010. Davies has also garnered great interest via another band he’s involved in, the culturally influenced heavy rock/groove metal band Woven Man. They released their first album, ‘Revelry (In Our Arms)‘, in 2018 and are gearing up to put out their second record before the end of 2019.

ACRIMONY has grown in name and reverence over the years, maintaining a cult following in the British and global heavy metal, stoner, and doom music scene as their records are now collector’s items.