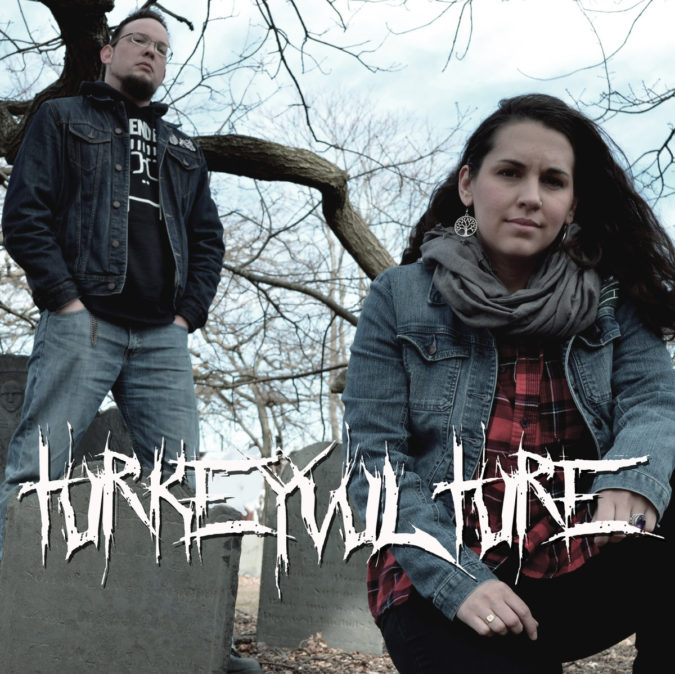 From the State of Connecticut comes the two-song ‘Boxer‘ EP, our official studio-bred introduction to the sludgy punk-metal duo TURKEY VULTURE.

I guess that will work, though I am sure some know-it-all type out there will dispute these facts, claim this is a Single with a B-side, something. Whatever, you say tomato, I say tomato… or six of one, half dozen of the other. Anyway, just the facts, ma’am.

It is true that TURKEY VULTURE is a duo, just as I claimed above, and one comprised of drummer Jim Clegg and guitarist / bassist / vocalist Jessie May. You may know May from her role as bassist in the aurally badass Owl Maker. Either way, perhaps you will know her name better by the end of this piece or maybe you won’t. While I am at it, let me also point out that Clegg created the artwork that adorns the ‘Boxer‘ EP.

Let us get to it. “It” being the EP that consists of one original composition and one rather unusual selection for reinterpretation (a.k.a. a cover song). More on that in a moment as things begin with a lo-fi, mid-tempo number full of musical energy and biting sarcasm, title track “Boxer.” Built upon grungy riffs amid a soupy bog of rather simplistic elements, à la guitar, drums, and vocals… you know, the “less is more” approach. It works, too. Relaying as a psych-punk tune laden with tongue-in-cheek lyrics delivered with heavy effects on the vocals.

Speaking of less is more, check out the band’s new DIY video for the song while you’re here. Produced by drummer Jim Clegg, the gonzo style video was reportedly done with no expense, thanks to not hiring extras, production crews, scene scouts, catering, or high profile celebrity actors.

Things get even further out there as we get to song number two, “Jolene“, originally penned and performed by Dolly Parton. It is nothing like that Grammy Award-winning composition, yet everything like what I am becoming to recognize as the nature of TURKEY VULTURE. This is something you will have to determine for yourself, how you process the duo’s music, and how it affects you… or doesn’t.

You can begin doing this now with the stream of their ‘Boxer‘ EP provided here, or fly like genus Meleagris to Bandcamp for other streaming and purchase options HERE.