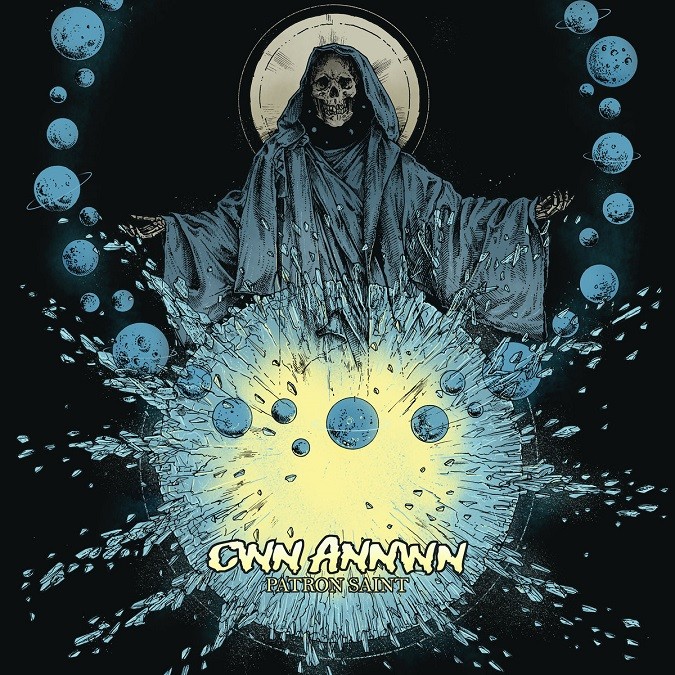 Band names can be deceiving.

With one like CWN ANNWN (pronounced Coon-uh-NOON, or “the hounds of Hell” in Welsh), it wouldn’t be unreasonable to look for Celtic references or folk tendencies. But no, the latest self-released album by the St. Paul, Minnesota-based band, ‘Patron Saint,’ is proggy power metal at its finest.

After an almost year-long hiatus, guitarists Neil James and Harry Rostovtsev, singer Julie Schultz, bassist Mike Strohkirch, and drummer Jake Stone have crafted a carefully edited comeback minus any self-indulgence – eight songs clocking in at under 35 minutes. CWN ANNWN has opened for the likes of Trivium, All That Remains, Exodus, Prong, Testament, Five Finger Death Punch, and Gojira, among a host of others. The professionalism they display on ‘Patron Saint‘ proves that all those opening stints made perfect sense.

The title track, along with all the others, is crisply and cleanly mixed, nothing lost or muted. Schultz’s voice is crystalline and cutting; here, she reminds me of Kobra Paige in her rich lower register. The immediate, catchy opener is a commentary on the seductiveness of religion and its promise of salvation that might not always work for all (“The prophets promised paradise but you were left behind”).

The more uptempo “Outlander” has a chorus filled at once with regret and defiance and a multi-layered, pounding breakdown. “It Will Come From the Sea” is either a fantastical tale of a horrific sea monster or a very clever climate change allegory, set off by some impressive vocabulary (like “proboscis” and such). Schultz sings cleanly and ringingly, but one might want her to snarl and spit a little, especially on a track like this. But then again, the delicate way in which she sings the title line is definitely effective, because it serves as the most subtle of warnings.

The first three tracks are especially notable for Strohkirch’s bass (you can really hear the strings resonate and it gives the material another, almost separate, rhythmic layer), Stone’s confident drumming (he’s comfortable with both blast beats and prog tempos), and the Maiden-esque guitar work of James and Rostovtsev (their unison playing especially is effortless).

“God of Needles” is a metaphor for drug abuse boasting some cutting plays on words (“You speak to me, through the mouth of liars / My demise, your design / Poisonous exchange has changed the way I was / The way I am”). They do stretch out a little bit instrumentally on this one – Strohkirch’s bass solo toys with a funk groove – and it’s a bit more experimental structurally and rhythmically, as well.

I had to look up what “Brita’s Vale” might be referring to, and what a delightfully obscure reference it is. Brita’s Vale is the site of a battle mentioned in the “Conan the Barbarian” comic books, and indeed the song tells the story, omitting any names and turning it into a search for self. Schultz does a grand job telling the story from the hero’s perspective, especially as he sees the long-ago battle in his mind’s eye.

“Course of Obliteration” is very appropriate to these chaotic times with its direct and pointed chorus: “Why live in peace when there is chaos? / Why summon kindness when there’s hate.”

“Salient Ground” runs through a host of dynamics, from its sludgy intro to its proggy tempo shifts (á la old Rush), all done with skill and without affectation – it’s all very natural and all makes sense. Now this song just may have a background in something like the Vikings or the Celts with its theme: that urge to seek adventure and new lands even after having set down roots and establishing a society, a home – the first verse especially sets the stage for this idea.

The closer, “Ice From the Sun,” with James on bellowing vocals (he used to be the main vocalist), shows CWN ANNWN’s range in this foray into death metal.