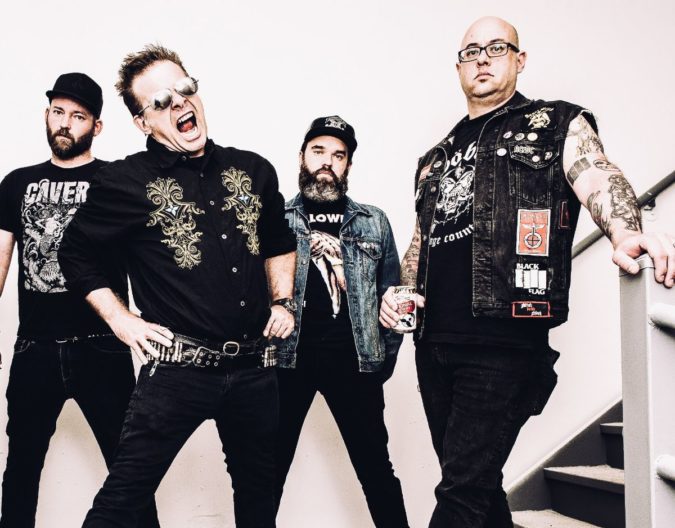 The first time I heard LIFETIME SHITLIST was several years ago when they were gearing up for their live set at The Maryland Doom Fest. After that show, their 2017 full-length ‘Slow March‘ [Halsey’s review] was stuck in my craw for a while.

Their sound was different than much of the traditional doom fare many were hankering for at the Fest. They were loud, fast, and a somewhat unexpected bomb of punk filth, hardcore, and down-tuned metal annihilation. Of course, they were pissed off – their name clues you in there – but they completely fit in with the rest of the lineup and the crowd was exceptionally appreciative (i.e., people went ballistic). Besides, they’re a Maryland band. Badges are earned through the default hardship of being from Baltimore.

Today, we bring you a treat. This Friday, August 16th, Grimoire Records delivers the band’s new album ‘BAD BLOOD‘. We have an advance full-stream of this fourth recorded outing from LIFETIME SHITLIST on the Grimoire label for you now. Set to drop nearly two years to the day since ‘Slow March‘, ‘BAD BLOOD‘ is eight songs of wonderfully brutal, unyielding reality from an intensely broad-minded band. They’ve decidedly ratcheted their sound up four or five seething anger notches. Sign of the times and all… but it’s not simply rage, there’s much eloquence within these harsh toned tunes and their music carries it forth like cannon fire.

Guitarist Matt Crocco chimes in on the new album:

“We worked hard on these songs and, against all odds, I think we’ve put out a killer record. Ned brought his bass back into active status for this one and, like the amazing bastard he is, now handles dual-duty on vocals. We just want to get the music out there and into everyone’s ears.”

The ‘Bad Blood‘ album was recorded in the Spring of 2019. The album was recorded, and also mixed and mastered by Noel Mueller. The cover photograph is by O.G. Mason, with design layout by Mueller. ‘Bad Blood‘ will be released via limited edition CD and digital download on August 16th through Grimoire Records.

The band also has a show coming up on Labor Day, September 2nd, at The Depot in Baltimore – with Stonecutters and Mangog. Find all the info HERE.