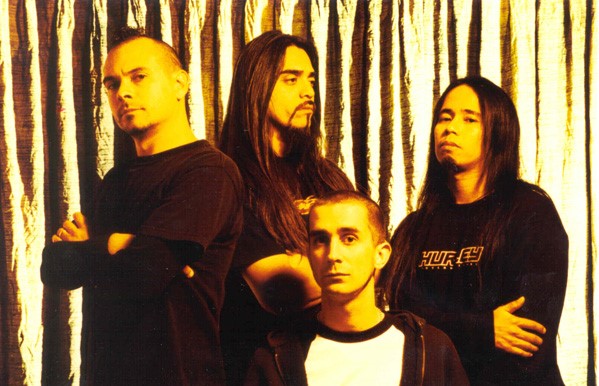 Six Degrees Of Separation, also known as Six Degrees Of Kevin Bacon in the trivia game-playing sect, is the idea that all people are six relating social connections (or fewer) away from each other.

I have long said that one place 6.D.O.S. is constantly active within is the world of music, regardless of style, genre, or scene, for none of that matters. You can test this theory and, if you are pretty knowledgeable about music in general, you can make it work. Just pick a band, any band, or perhaps just a musician, whichever, and start threading them along into other bands. I assure you, it CAN be done if you know your music right down to minute details or obscure facts.

Let me say that I could sit here and name a band, for example, Fates Warning, and begin breaking things down move by move, truth by truth, or tidbit by tidbit. In time, I could probably connect them to nearly any other band in existence, though it would likely require more than six maneuvers. Don’t worry, I am not going to… but I am going to connect them to another band, just by using a single person’s name.

The person in question is Fates Warning’s long-running, dynamic singer, Ray Alder, who is or has been, at the mic’d helm of other bands at times. There was his brief placement in 80’s act Syrus, along with a lengthy run in Redemption from the mid-2000s until recent years. In the period of time between those two bands and while simultaneously fronting Fates Warning, there was ENGINE.

While the exact origin of ENGINE coming to be is not readily available, here’s what facts are known: Sometime in the late Nineties, Alder aligned himself with former Agent Steele guitarist Bernie Versailles, drummer Pete Parada (Steel Prophet, Saves The Day, Halford, The Offspring), and his Fates Warning bandmate, bassist Joey Vera (also of Armored Saint).

With Ray and Joey’s ties to Metal Blade Records, the label was the obvious choice to house the band ENGINE. In 1999, they released the band’s self-titled début album. It was a groundbreaking offering, one that tapped into audio elements that would soon be explored to a much further extent in the then-burgeoning grunge rock movement. That was not all though, with obvious progressive rock undercurrents, and flowing groove metal in abundance, the ‘Engine‘ album was a trailblazing sonic statement.

Produced by the band’s Joey Vera, and mixing assisted by Bill Metoyer, the album resonated well with fans and critics alike. With its fluid instrumentation providing the road map and the unequaled heights of Alder‘s fantastic vocal performances, this eponymous record is a respectably solid introduction to this “supergroup”. The designation of them as such now had not been attached to them at the time, still being referred to as a “side project” by many.

If there were any doubts about ENGINE being a true band in every sense of the word, they would be obliterated with the 2002 arrival of their sophomore album, ‘Superholic‘. Revealing a large scale leap in exploring musical styles, with an untethered foray into experimental aspects, the second round from ENGINE – once again produced by Vera – was quite more diverse than its predecessor. At the same time, there is a prevalent foundation of heavy metal beneath the structure of the album, that happens to include a cover of The Cure’s “Fascination Street“, by the way.

ENGINE was able to do some touring in support of ‘Superholic‘, a feat not accomplished with their first album, save for a few European festival dates and an industry showcase in Los Angeles. At the same time as these events, the ENGINE member’s other bands were growing in demand. Ultimately, the second studio outing from ENGINE would also be their last, with the band never really officially disbanding, yet entering a lengthy, ongoing hiatus nonetheless.

Since the arrival of the two albums from ENGINE, they, and the band, have only grown in popularity with fans. Both releases are highly sought after by collectors and the average music fan, while the members of ENGINE continue to ply their crafts elsewhere to this day.