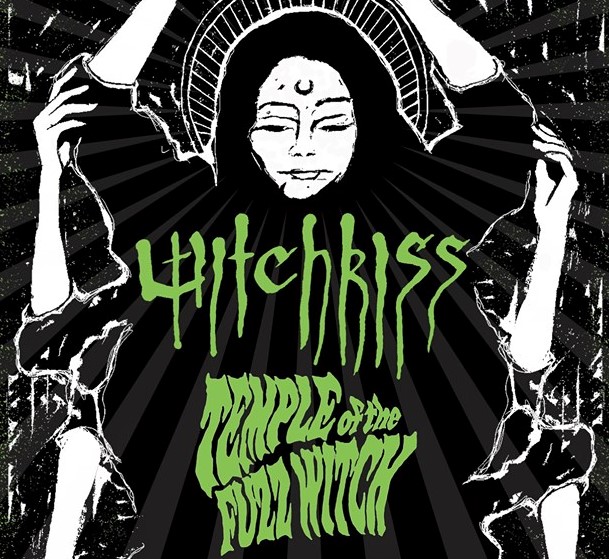 The New York, atmospheric doom band WITCHKISS announce that they will be embarking upon a short U.S. tour from late September into early October.

Things will kick off in Buffalo, NY on September 19th, and from there the trio – Amber Burns (drums / vocals), Scott Prater (guitar / vocals), and Tyler Irish (bass) – head south. A little over two weeks later, the jaunt will come to an end in Brooklyn, NY on October 5th. Detroit’s Temple Of The Fuzz Witch will provide support for the entire run, except the stop at the third annual edition of the Riff Relevant co-sponsored DESCENDANTS OF CROM festival in Pittsburgh.

It appears WITCHKISS will be trying out some new material on the road, as they allude to in a comment about the tour:

“We are super excited to be playing some new material! We will be joined by “Temple Of The Fuzz Witch” on all of the shows except for our stop at the “Descendants Of Crom Fest” in Pittsburgh on September 21st. Keep an eye out because it’s likely we will be adding a couple more dates in this run.”

‘The Austere Curtains Of Our Eyes’, the latest studio album released by WITCHKISS, arrived in July of 2018 and we are including a stream of it here. Contained upon it are massively ominous compositions that exude crushing avalanches of heaviness laced with groove. Within these pummeling presentations is a dichotomy of vocals at odds with each other, one an eerie female voice and the other a caustic, male guttural discharge.

We are also including the eponymous March 2019 début release ‘Temple Of The Fuzz Witch‘ from the tour’s other act. Enriched with occult undercurrents, this lysergic-infused, fuzzed-out drenching of psych-doom has a riveting vintage quality about it. Hazy and harrowing to ones head, this musical molasses with ethereal vocals and shrieking guitars is not something for the easily shaken.

Catch WITCHKISS and Temple Of The Witch this September and early October at the dates listed below; only WITCHKISS will appear at Descendants Of Crom III in Pittsburgh September 21st.

*NO Temple Of The Fuzz Witch