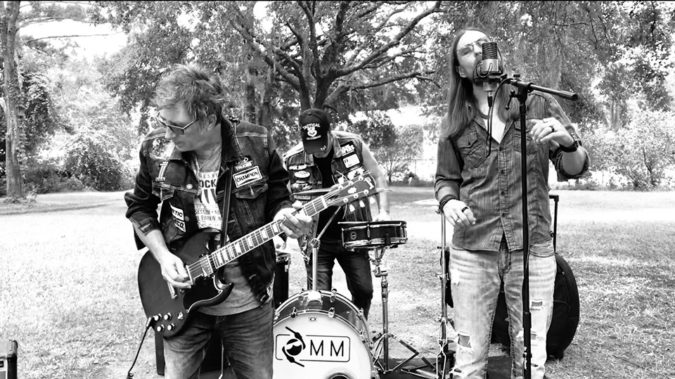 “What has been is what will be, and what has been done shall be done again; there is nothing new under the sun.” – Ecclesiastes 1:9 | “Sooner or later, everything old is new again.” – Stephen King, The Colorado Kid

Do you see a pattern developing here? These are referenced in connection to renewal or the revitalization of something… anything. It is a theme applicable to the subjects of this review, the Jacksonville, Florida / Nashville, Tennessee-based OLD MAN JASPER, the new band project of 100 Watt Vipers’ guitarist, Paul “PJ” Joseph. Alongside him completing this trio are vocalist Jones Nelson and drummer Marc Myers. Together they recently released a six-song, self-titled EP.

If you are familiar with PJ’s previous output within 100 Watt Vipers, like that of their 2018 ‘Holy Water‘ album [review], then you know what he is all about. If not, allow me to testify, as PJ is a man on a mission, a crusade to regale the fans of rock ‘n roll with some contributions of the very finest caliber. With Nelson and Myers by his side, Joseph’s quest in revisiting purist, vintage blues in the contemporary age joins with these like-minded talents and a new phase unfurls.

With the multifaceted music of OLD MAN JASPER culling components of Delta Blues and several genres of rock including psych, classic, folk, indie, and southern, these results are true Americana. I was getting those back-of-the-neck shivers from the very first notes of lead-in cut “Find Your Peace” (video below), a gritty, somewhat grungy throttler. Rolling along like the tides themselves, this is rock ‘n blues greatness simplified and straightforward, with Paul, Jones, and Marc making you feel every note or chord struck.

From there, the scorching swagger and backwoods stomp of “On This Sunday Mornin‘” is a measured, yet sweltering ditty with feverish qualities. Misleadingly minimalist in nature, with the slide guitar a predominant feature, there is an ever-present vibe of “less is more”. There is no need for over-embellished studio tricks, bells and whistles, or smoke and mirrors, for this is music as organic as can be.

There is always an undercurrent of spirituality permeating things and “Ain’t Got No Peace Of Mind” is an ideal example of this. Driven by fuzzy, twangy riffs and rhythmic grooves accentuated by heavy-handed drumming, Nelson‘s heartfelt crooning is rife with religious references and elements. These are reoccurring aspects that repeatedly rise to the surface in other songs, like the simmering “Trouble In The Valley“, or the molten rock of “Prey For Salvation“.

These songs are blue-collar hymns of the broken soul, briefly decrying their woe and their temporal lot in life right before the realization of a hope. This is something blatantly expressed in “Rains That Are Falling“, a song detailing the notion that life does indeed bring storms. Accepting that surety means standing at a symbolic crossroads, one option to aimlessly wallow and then wilt, the other to weather the tempest and overcome.

Ultimately, the music of OLD MAN JASPER is an innovative resurrection of the past’s southern style, U.S. delta blues now translated with modern expressionism. Achieved through a gonzo approach toward songwriting and execution, stripped down and governed by a D.I.Y. ethos where the music speaks for itself. It is pristine and it is powerful, devoid of trends and fads found dominating the mainstream music scene. Discover this for yourself by means of the OLD MAN JASPER self-titled EP stream in this review, or at Bandcamp HERE where it is streaming and available to purchase.