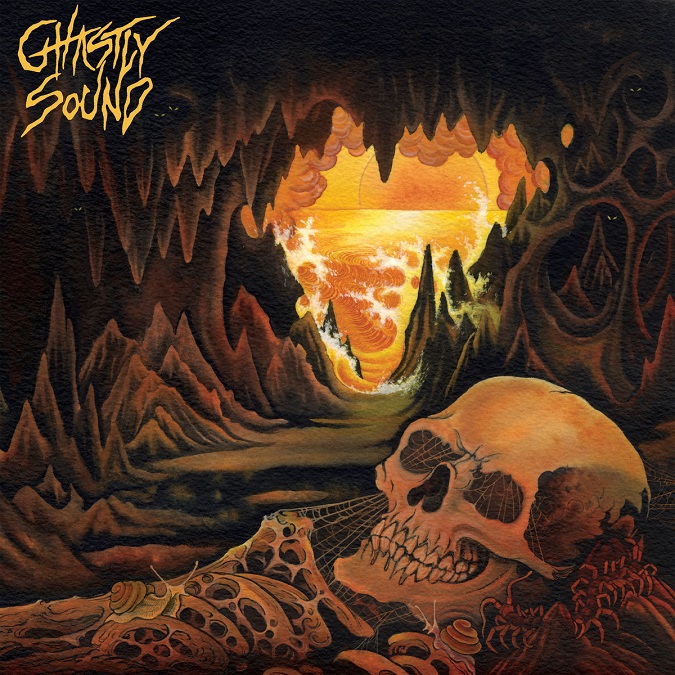 Vermont’s trio of solidly sludge rock, distinctively metal, yet ever-tilting towards hardcore GHASTLY SOUND are nearing the release date for their debut full-length ‘Have A Nice Day‘.

Magnetic Eye Records is letting the album loose on Friday, September 13th, but today we have an exclusive U.S. premiere stream of the band’s most recent track “No Security.“

Following a three year culmination of meticulous planning, with the release of two genre-twisting EPs, regional touring, and a few spacious festival appearances on both sides of the U.S., GHASTLY SOUND is now ready to unleash ‘Have A Nice Day‘ unto the world.

Recorded last winter (2018) at Overit Studios in my frigid hometown of Albany, New York, ‘Have A Nice Day‘ was engineered by Dave Parker (ex-Coheed and Cambria), mixed by Adam Clairmont, and mastered by Grammy winner Alan Douches.

‘Have A Nice Day‘ showcases GHASTLY SOUND’s ability to merge sonic tributaries from head-buzzing stoner rock, melodic alt-metal, and obliterating hardcore into a tsunami of inescapable infectiousness that needs no classification to get pounded into blissful submission by. And, lest anyone forget, this slab of fine northern aggression is delivered by a band that accomplishes its gargantuan, adrenalized riff-mastery without the inclusion of a guitarist.

The band commented about the new “No Security” track:

“This song is about staying authentic despite seeing the cracks. Seeing all the manipulation and insincerity in the world and rather than succumbing to it, it gives you that much more reason to be true and steadfast and there for yourself and the people in your life.”

The band has a couple of rather special upcoming shows – one being an album release show the weekend of its release, plus the first Magnetic Eye Records label showcase in early November presented as The Day Of Doom. This is a significant event, with live sets from Summoner, Elephant Tree, Horsehunter, Domkraft, Leather Lung, Caustic Casanova, These Beasts, High Priest, and of course GHASTLY SOUND all under one dark roof in Brooklyn. It’s not merely a one-dayer live show, as four of those bands will have live recording and subsequent album releases of their performances during The Day Of Doom.

GHASTLY SOUND‘s debut full-length ‘Have A Nice Day‘ will be available on CD and vinyl LP from Magnetic Eye Records, as well as all major streaming outlets on Friday, September 13, 2019. Magnetic Eye Records has the album in multiple formats available for pre-ordering through the label’s Bandcamp page.