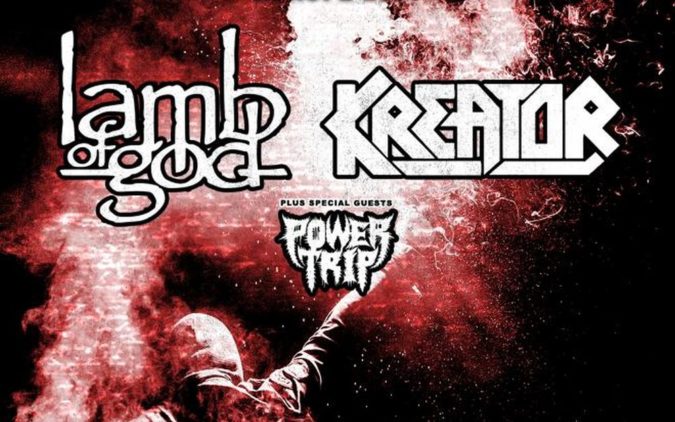 Two of extreme metal’s more massive entities, LAMB OF GOD from the U.S. and Germany’s KREATOR, announce plans to unite for a live campaign across the Olde Country and U.K. in early 2020.

Dubbed the “State Of Unrest Tour“, these iconic bands will lay waste to the continent in March and April of next year with support from the Texas-based crossover crew, POWER TRIP. Comments from the LAMB OF GOD and KREATOR camps read as follows:

“It’s always a blast when you tour with someone for the first time, so we’re looking forward to hitting the road with Keator, as well as getting some more hang time with our maniac pals in Power Trip. See ya in March and April!“

“Hordes of Europe! It is my pleasure to introduce the State Of Unrest tour; for too long European and American metal has been divided and now it is time for unity! We are excited to be playing our only European shows of 2020 with the mighty Lamb Of God and support from one of my favorite new thrash bands, Power Trip. It’s going to be a wild night of metal celebration – DO NOT MISS OUT!“

This monstrous trek will launch March 27th, 2020 in Stockholm, Sweden, and continue for a total of 22 performances until it wraps up on April 25th, 2020 in London, United Kingdom. Find the itinerary listed below.

LAMB OF GOD has been busy recently, as the band’s longtime drummer (since their days as pre-L.O.G. act Burn The Priest) Chris Adler exited the band in July. A founding member of the beloved band, his leaving came as a shock to many fans and was attributed to injuries he sustained in a 2017 motorcycle accident. LAMB OF GOD recently revealed that Arturo “Art” Cruz, the current drummer for Prong and Winds Of Plague, will be Adler’s permanent replacement.

LAMB OF GOD is currently in the midst of celebrating the 15th anniversary of their milestone third studio album release, 2004’s ‘Ashes Of The Wake‘. Simultaneously, they have been active on the road as part of the Slayer “Farewell” world tour and will appear at the Aftershock and Exit 111 festivals in October. Also recently announced, LAMB OF GOD are a late addition to Megadeth‘s MegaCruise, the ocean-based, band-bearing flotilla of heavy metal that will take to the high seas next month.

KREATOR have been actively and relentlessly touring all over the planet since they unleashed the ‘Gods Of Violence‘ album via Nuclear Blast in 2017. The band’s 14th studio album overall, ‘Gods Of Violence‘ resulted in the band’s highest-charting album release of their career and those live actions are ongoing.

Then there’s POWER TRIP, which also has immense tours and other live appearances scheduled at this time. These include today’s newly announced European and U.K. run and, once they return to the U.S., another trek of tremendous magnitude. Early November will see POWER TRIP, alongside fellow Texans Creeping Death and Pennsylvania’s Devil Master, providing support to High On Fire on a tour of North America (detailed HERE).

Tickets for the European / U.K.  “State Of Unrest Tour 2020” with LAMB OF GOD, KREATOR, and POWER TRIP went on sale this past Friday, September 6th, and are available to purchase at this LINK.