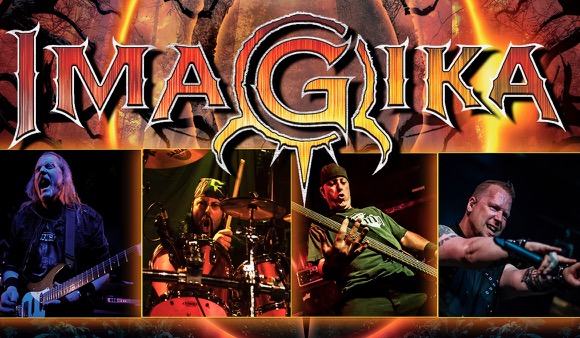 Inspired by legendary names in heavy metal like Judas Priest and Iron Maiden, the band was also influenced by their regional scene’s earlier waves of thrash metal bands during the Eighties. Within a year of their formation, IMAGIKA recorded and independently released a three-song demo as a trio, but soon brought bassist Michael Dargis into the fold.

As a quartet, IMAGIKA released their eponymous 9-track introductory album through the Headless Corpse label in 1995. At a time when grunge and alternative rock were dominating the mainstream and commercially-driven outlets, this self-titled effort received quite a warm welcome from metal fans and critics. With Rice’s riff-driven songs full of fiery solos, delivered with varied tempos and intensities via Moreno, a real stand out aspect of the ‘Imagika‘ album were the vocals of Michael. The music seemed ideal for a dynamic, wide-spectrum singer schooled in the Dio / Dickinson / Halford class, something that David was clearly not as he injected aggressive, gruffly rough, even punk-like barked vocalizations.

The album put IMAGIKA on the map in the U.S., a move repeated in Europe the following year thanks to a licensing deal with Crazy Life / Shark Records. IMAGIKA spent the next two years touring the United States while writing songs for an eventual sophomore album release, 1998’s ‘Worship‘. Though once again released through Headless Corpse, Nuclear Blast / Indigo provided worldwide distribution for the album. That wider market availability, along with the developing fan support base, helped the band land their first European tour supporting Grave Digger and Iron Savior in 1999.

In the fall of 2000, IMAGIKA returned with their third studio album, the Massacre Records issued ‘And So It Burns‘ is one that many fans felt was a quite accomplished outing from the original lineup. I admit that this was a phenomenal studio high point for the band, a molten eruption of incinerating heavy metal that found IMAGIKA firing on all cylinders. However, the album did not receive a U.S. release at the time, which was perhaps sort of a sign, for it brought a period of trials and changes for IMAGIKA.

By the time the third album arrived, Michael Dargis had exited the band and was replaced with bassist Elena Luciano. Though circumstances prevented the band from any European touring to support the record, it eventually received a U.S. release from (now defunct) WW3 Records. The band followed up the delayed-release with touring and festival dates to help solidify IMAGIKA‘s footprint in North America, but further band roster alterations loomed.

Between 2002 – 2004, IMAGIKA shared a pair of demo offerings – ‘4-song Demo 2002‘ and ‘Devils On Both Sides‘ – and when the band made their official return, it was clearly with a vengeance. With a revamped lineup of band founders Steven Rice and Henry Morena, bassist Elena Luciano, they were joined by guitarist Pat Toms and vocalist Norman Skinner. IMAGIKA struck with an evolutionary leap in the Mausoleum Records hosted fourth studio album, ‘Devils On Both Sides‘.

With Skinner’s versatile, traditional metal vocal style, the band wrote more diversified and challenging material. It paid off with increased praise for both IMAGIKA and the album, something that exponentially magnified with the band’s follow-up outing, ‘My Bloodied Wings‘. Prior to the recording, guitarist Pat Toms left the band, and they were back as a quartet for the 2006 release from Crash Music, Inc. in the U.S. and Sleaszy Rider Records in Europe. This marked the start of the long-running partnership between IMAGIKA and the album’s producer, King Diamond guitarist Andy La Rocque.

Each new IMAGIKA release fueled greater success and increased recognition for the band. Those two things ratcheted up with 2008’s ‘Feast For The Hated‘ from Locomotive Records. The album landed at No. 3 in the Top 15 on CMJ and Friday Morning Quarterback’s (FMQB) metal charts and stayed in the Top 20 another four weeks thereafter. Nothing lasts forever, as not long after ‘Feast For The Hated‘ was released, Elena Luciano exited the band to concentrate on her family life.

Enter new bassist Jim Pegram, as IMAGIKA then spent the next year on the road supporting their sixth studio album with a North American tour and festival appearances. Never one to sit stagnantly or rest on their laurels under the leadership of Steven Rice, the band had been writing new material that whole time. In late 2009, the band headed to Sonic Train Studios in Sweden, where they regrouped with La Rocque and laid down what would be their seventh full-length album, ‘Portrait Of A Hanged Man‘.

Released from Metalville Records in 2010, ‘Portrait Of A Hanged Man‘ was unquestionably an IMAGIKA high point and one of the band’s most aggressively searing albums to date. With previously unmatched heaviness both musically and vocally, the album garnered more reverence and respect for IMAGIKA. Events then mirrored past happenings, as founding drummer Henry Moreno announced his departure.

Drummer Wayne Devecchi was recruited and the group spent the summer touring extensively. After returning home to begin to write their next album, vocalist Norman Skinner announced his intent to exit IMAGIKA to pursue other musical projects. This was the point in time that Steven Rice made the decision to put IMAGIKA to rest… but not before one last show, supporting Armored Saint, which occurred in October of 2010.

In the years since, Steven Rice continued his contributions to the world of metal with another creative outlet, Kill Ritual. Norman Skinner stayed active with Niviane, as well as Hellscream with members of Cage, and performing solo under his own namesake act, Skinner. Jim Pegram continued to perform in many local and regional acts, as well as joining Steven for a period in Kill Ritual, and also with Norman’s solo outfit Skinner.

Fast forward to nearly a decade after their initial cessation of activities, and there’s news from the band… IMAGIKA are back!

‘Only Dark Hearts Survive‘ was just released from Dissonance Productions on Sept. 13th, and we share the album artwork and a full album stream, along with the official video for “The Spiteful One“. The band’s hiatus has not tempered their metallic volatility in any way, picking right back up where they left off. The new album from IMAGIKA, ‘Only Dark Hearts Survive‘, is out now from Dissonance Productions and available to purchase HERE.