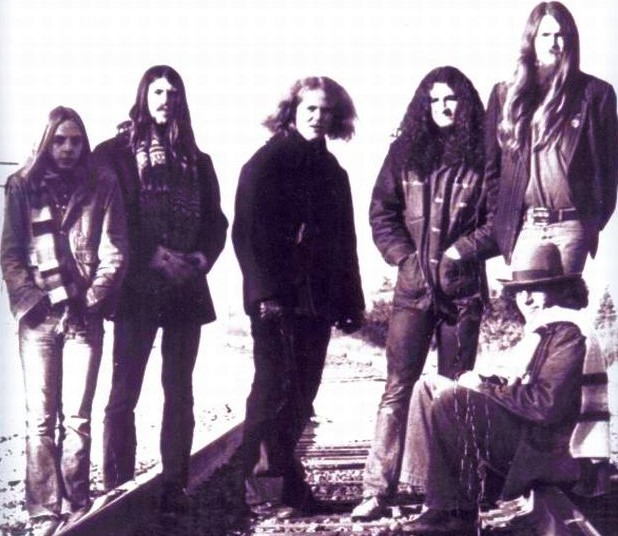 Let’s be real… Louisville, Kentucky is not at all known for being a hotbed supplier of countless rock and roll bands during the era now designated as the Classic Rock period.

Like most things musically related, ask someone what span of years might constitute the age of Classic Rock and there will be no unanimous consensus, I assure you. Some will say the Sixties and Seventies, another will say the Seventies exclusively, and still, another will declare only the early Seventies. Get my drift? All of that aside for a moment, if you also happen to ask some hippie ‘head type that dwelt in Derby City during that period: “What band best represented the Louisville rock and roll scene in the ’70s?“, chances are you will get one particular group more than any other.

LESLIE’S MOTEL was formed in 1971, by core trio Bill Tullis (vocals, rhythm guitar, tambourine), Mike Seibold (lead guitar, vocals), and Richard Bush (organ, piano). The three were not novices by any stretch, as Bush had been a keyboard player with the soul band Tom Dooley & The Lovelights. Seibold and Tullis were both in one of Louisville’s earliest heavy blues bands, Conception, which Tullis put an end to after seeing The Allman Joys (pre-The Allman Brothers Band) in Nashville during that time. Apparently quite impressed by them, Tullis is on public record stating “I knew my musical path was going to change… Mike and I disbanded Conception and sought out some new musicians to be a part of this southern rock sound.”

Those new musicians eventually settled on was Ray Barrickman (bass, vocals), Paul Hoemi (drums), and Roy Blumenfeld (drums, congas, hand claps). Together, the six musicians rehearsed in a garage off of Dixie Highway in Louisville. En route to each rehearsal, they passed by the inspiration for their name, Leslie’s Motel. An alleged “house of ill repute” mainly frequented by soldiers from Fort Knox, the motel was known to be open for business according to how their sign was lit.

It was not long until the band, LESLIE’S MOTEL, built a reputation for stunning onstage jams reminiscent of acts like Ten Years After and Ozark Mountain Daredevils. The band played the eastern seaboard club circuit from as far north as Boston to as far west as St. Louis, and south to Florida. From all accounts, they were well embraced in all locales. So much so that the group was offered the opportunity to open for large name national acts like Ted Nugent, John Lee Hooker, Rory Gallagher, Charlie Daniels, MC5, Mitch Ryder, and many other artists.

In 1972, LESLIE’S MOTEL entered a Louisville recording studio, King Studios, where they recorded their début album with The Oxfords’ guitarist Jay Petach as the producer. What resulted was the nine-song ‘Dirty Sheets‘ album, which was then unsuccessfully shopped to Capricorn Records, Bell Records, and a few Nashville based Mom and Pops, and this is where our story goes off the rails. Well, not so much off the rails as much as off the books – as in history books, online sources, word of mouth, or even a whispered rumor. ‘Dirty Sheets‘ was shelved. The album went unreleased, and then, being designated to the limbo that is “the shelf”, there it sat for nearly four decades.

LESLIE’S MOTEL continued to perform live in venues and on stages throughout the east coast until the players parted ways in 1976. The guys went on with their lives, some moved on to other bands, some joined the mainstream society as former musicians. The years passed to become decades until our tale picked back up in the year 2009. This was when Bill Tullis was contacted by Roger Maglio, the owner of Gear Fab Records, and Maglio was quite interested in releasing the nearly forgotten ‘Dirty Sheets‘ album.

The move was eventually green-lit to go forward and before 2009 ended, the sole studio album from LESLIE’S MOTEL, ‘Dirty Sheets‘, was remastered by original producer Jay Petach and shared with the world for the first time. Evidently, the world was waiting, as the album quickly began selling all around the globe, with rave reviews in various places. The Louisville based Eccentric Observer publication conducted an interview with all of the musicians appearing on the album, in which the reporter quipped that LESLIE’S MOTEL should reunite. Without a lot of unnecessary debating or speculation, the half-hearted suggestion became a game plan.

Prior to a scheduled concert in Derby City that night, the first official live reunion of LESLIE’S MOTEL took place on Friday, November 13, 2009, in the studios of local public radio station WFPK. After just three days of rehearsal during the span of 37 years, LESLIE’S HOTEL proceeded to amaze the audience in attendance. Unbeknownst to the band during the show, a 16-track recording from the studio’s board, plus video from multiple cameras captured it all. Producer Jay Petach eventually remixed the audio and edited the video to create material for a second release, 2010’s independent CD and DVD offering, ‘Still Alive And Dirty‘.