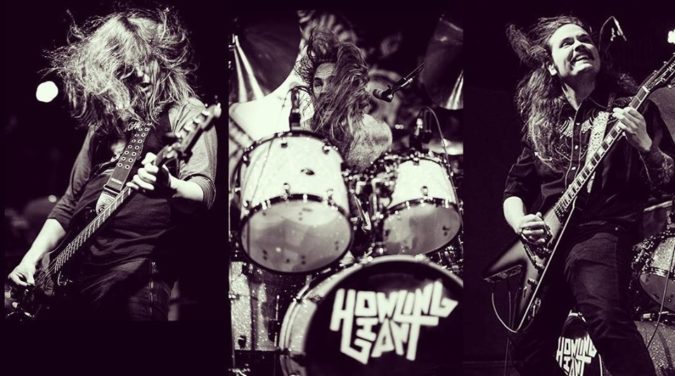 ‘The Space Between Worlds‘ will indeed arrive September 27th from Blues Funeral Recordings and promises to provide a legitimate Album Of The Year contender. As is the case with all of the band’s songs, there is a story told in the contents of the new album. In their latest offering, the tale is a conceptual one about “…a huntress who travels the infinite metaphysical worlds brought into being by the dreams of humankind. In these realms, she encounters a dream eater which threatens to unravel the fabric of reality by devouring dreamers and destroying the dimensional gateways.”

Quite appropriate sounding subject matter for HOWLING GIANT, who possess a knack for blending multi-faceted, progressive qualities with elements of stoner rock, punk, and psychedelic metal. Over the span of three previous EP releases and a countless number of hours logged on the road touring, HOWLING GIANT has cultivated quite a loyal following of fans.

The band’s founders, Tom Polzine (guitar and vocals) and Zach Wheeler (drums and vocals), recently welcomed Sebastian Baltes (bass and vocals) into the fold, adding another dimension to the trio. Unquestionably a more than capable bass player, Baltes also excels at providing vocals, thus expanding HOWLING GIANT‘s impressive vocal harmony approach with the addition of a third voice. This reality is evident in the new tracks from the band, which you have the opportunity to hear for yourself today.

Along with the unveiled ‘The Space Between Worlds‘ album details, we are including streams of three songs – “Comet Rider” and “Cybermancer And The Doomsday Express“, as well as “Ice Castle“, featuring a vocal contribution from ASG’s Jason Shi.

Sebastian Baltes offered the following insight to the song “Cybermancer And The Doomsday Express“, also available below via official video treatment. He comments:

“‘Cybermancer And The Doomsday Express’ is one of the dreams that our main character witnesses through a portal in her nexus world. Think car thief, but replace the El Camino in question with a 100 ton mech-warrior that takes over his mind and leaves the already post-apocalyptic wasteland in shambles. This song is a riff-driven, heavy-hitting punk rock anthem.”

Check out these songs here and experience the tremendous musical prowess and versatility of HOWLING GIANT. Friend of the band, Drew Harakal, adds extra sonic textures and depth to the album with his organ and synth skills. ‘The Space Between Worlds‘ is available in a variety of formats – including CD, vinyl, and digital – and will be released September 27th from Blues Funeral Recordings; pre-order at the label’s Bandcamp.

HOWLING GIANT is currently on a run of live dates this week, a trek dubbed the “Album Release Tour“. They will also headline the fourth annual Steel & Stone Showcase in Asheville, N.C. in November and you will find all confirmed live actions listed below.

Lastly, Baltimore, Maryland’s Oliver Brewing Company will celebrate HOWLING GIANT with a release of The Space Between Worlds Beer on September 28th at the band’s brewery gig. A funky and spicy fall Saison, it will be brewed with crystal rye malt to deepen the color and add pepper notes, and dry-hopped with Hallertau Blanc and Huell Melon hops, with an expected ABV of approximately 7%.