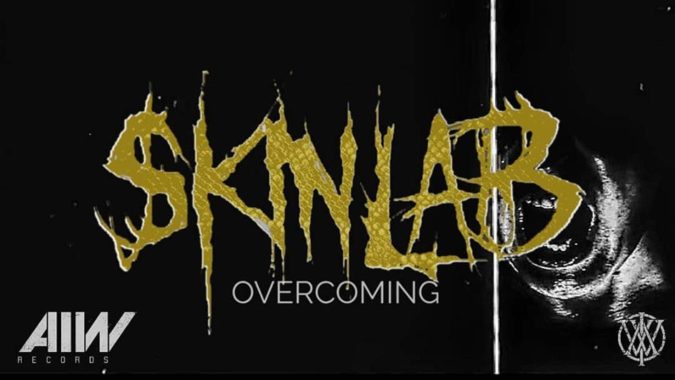 This month makes three years since the September 2016 announcement from Steev Esquivel (bass and vocals) and Paul Hopkins (drums) that they were reforming the San Francisco, California groove-infused, thrash metal band SKINLAB.

The pair made good on those plans by releasing two new singles shortly thereafter, “End Of Silence” arrived in Fall 2017, followed by “Dead Again” in Winter 2018. It was the first new music from SKINLAB in nearly a decade. However, before 2018 was over, Hopkins left SKINLAB and was replaced by drummer Fabian Vestod. He joined Esquivel alongside the band’s longtime guitarist Steve “Snake” Green and newcomer ax-man Marcos Medina Rivera, as the four began work on the band’s comeback album.

That work continued under the auspice of producer Ulrich Wild (Pantera, Project 86, Static-X). Today, the news that many have anxiously awaited has arrived. The fifth full-length album from SKINLAB and their first new studio record release since 2009’s ‘The Scars Between Us‘, is set to arrive next month.

Art Is War Records will unleash ‘Venomous‘ on October 25th and we are excited to share the album details – with artwork created by Richard De Silva – and visualizer for the new single, “Overcoming“. The latest track delivers elements of vintage SKINLAB, providing a foundation for the band’s meld of explosive sonic aggression tempered with mesmerizing melodic passages. On top of all that, Esquivel‘s signature dual vocal styling compliments the music with both animated aggressive parts and lighter, clean ones.

That aural formula is one SKINLAB have masterfully executed since their incendiary 1997 introduction, ‘Bound, Gagged, And Blindfolded‘. They continued to explore and expound upon those alluring components on follow-up releases ‘Disembody: The New Flesh’ (1999), ‘ReVoltingRoom’ (2002), and previously mentioned ‘The Scars Between Us’ (2009). While other acts attempted to tinker with blends of heaviness and more melodic touches, SKINLAB rose above the din with their perfected mix of tranquility-tinged volatility.

It is with near certainty that fans can expect no less in the contents of the imminent new album, with Steev Esquivel offering the following comment:

“Venomous is the album that best represents Skinlab in 2019… heavy, brutal, and honest… we feel that we’ve stood the test of time without losing integrity and chasing trends… we’re back stronger than ever!“

Experience the return of SKINLAB via ‘Venomous‘ when it arrives October 25th, from Art Is War Records. Pre-order now.