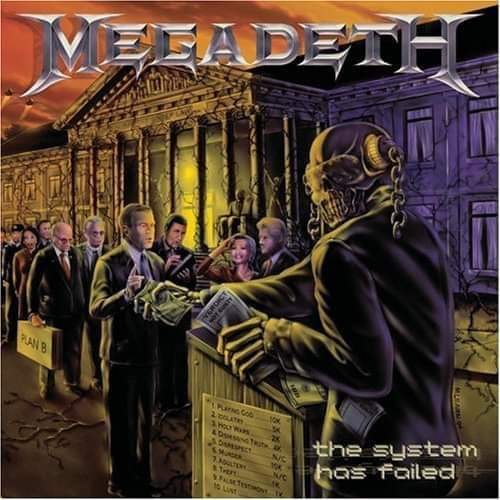 You have to be resilient to make it in metal music. Even if you’re part of a venerated institution like MEGADETH, there’s gonna be tough times.

After the career-low of ‘Risk‘, with its Frankenstein’s monster pop experimentation – an album that cleaved the band’s fan base in one fell swoop – the order of the day was damage control. MEGADETH mastermind Dave Mustaine took a step back, surveyed the landscape, and tried to set things right with the much more metallic in spirit ‘The World Needs A Hero‘. But, as Mustaine explained in various interviews at the time, redirecting a massive enterprise like MEGADETH is a bit like turning around an aircraft carrier – it takes time.

Life, however, is what happens while you’re busy making plans. While in the midst of another round of rehab for assorted addictions, Mustaine suffered a crippling nerve injury to his left arm, rendering his fretting hand useless and leaving his future as a musician very much in doubt. After a year of therapy to overcome this new obstacle, Mustaine was eyeing a solo album, but the suits in charge had other ideas, so he returned to the warm embrace of the MEGADETH name. But would the fans still be awaiting his return?

Enlisting Chris Poland, who provided mercurial leads on the first two classic MEGADETH releases, as well as legendary drummer Vinnie Colaiuta and session bassist Jimmie Lee Sloas, the band entered the studio with enough ideas from Mustaine to create two records. The resulting album, ‘The System Has Failed‘, was released on September 14th, 2004.

From the start, this is clearly the work of a rejuvenated Mustaine, with classic MEGADETH political themes being explored on album opener “Blackmail the Universe“, Dave quickly showing why he’s still considered one of the top rhythm guitarists in metal, the precision and complexity of his playing not diminished one iota by his time away.

“Die Dead Enough” is a mid-paced rocker loaded with guitar goodies to savor, while “Kick the Chair” gives us the mother lode of synchronized drums and blazing guitar riffs hearkening back to the interplay between Dave and Nick Menza (R.I.P.) on classic albums like ‘Rust in Peace‘ and ‘Countdown to Extinction‘. Dave’s composed soloing has always been a treat and here he provides alluring melodic twists during the extended instrumental breaks that make up the pummeling second half of the song.

Bizarre music box melodies start off mid-paced rocker “The Scorpion“. It possesses everything we’d come to expect from MEGADETH – great riffs, one-of-a-kind melodies, and a nasty disposition. The song’s chorus is an irresistible slice of thrash perfection – tense, pissed off, and instantly memorable. The guitar solo climbs up your spine like ivy, injecting its venom mercilessly. The galloping “Tears in a Vial” is another highlight, full of NWOBHM-style hooks, inventive guitar paradigms, and an absolutely burning solo by Poland, which morphs its way into another slick harmonized section before finishing us off with more brilliantly executed shredding.

The brief but pulse-quickening set-up in “I Know Jack” provides a launching pad for the raging old-school paean “Back In The Day“. Rapid-fire pull-off licks propel us through the verses, Dave giving us a cliff notes retelling of the origins of thrash and how you needed to be there to truly appreciate what a special thing it really was in music history. A rousing thrash anthem that can stand next to Exodus’ “Toxic Waltz” or Metallica’s “Whiplash” and hold its own comfortably, this was the MEGADETH we’d all been waiting for – still full of hooks and aggression, but perhaps tempered with a bit of nostalgia for those simpler times.

Dave spells out his contempt for anyone who turns on their friends on the scathing “Something That I’m Not“. The song is generally believed to be a thinly veiled attack on Lars Ulrich, who had annoyed Dave yet again with his insistence that Dave’s emotional display about his ousting from Metallica be included in the airing-of-dirty-laundry documentary ‘Some Kind of Monster‘. It’s followed by “Truth Be Told“, one of the more complex tunes here, and one that gets more interesting the more it is revisited.

“Of Mice and Men” is composed of another great series of snapshots from Mustaine’s life, the type that has always made for compelling lyrical fodder. For all the misgivings critics have had over the years regarding Dave’s vocal style, no one else sounds like him. Any vocalist that is instantly recognizable in a genre as flooded as thrash metal is miles ahead of the game.

It’s not just the sound he elicits, it’s the type of adventurous melodies that he attempts which make it all so compelling and consistently surprising. They SHOULDN’T work, but they do, with Mustaine relying purely on instinct and his innate ability to pluck complex but catchy melodic ideas from the ether. The chugging “Shadow of Deth” segues seamlessly into album closer “My Kingdom“, a satisfying romp through familiar MEGADETH territory that leaves the listener once again eager to hear more.

‘The System Has Failed‘ was the album MEGADETH needed to deliver at this moment in their history, setting up what would be a (mostly) brilliant run of albums that continues to this day. Despite the ever-present specter of personnel changes, MEGADETH has remained a force in metal music, standing its ground against the proliferation of harder, faster, and more brutal styles that have emerged since the band’s formation.

F. Scott Fitzgerald once famously wrote, “There are no second acts in American lives“. Excuse me, Mr. Fitzgerald, Dave Mustaine would like a word…